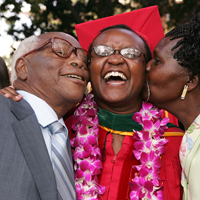 Mutuhi Mugo, who just graduated from the Keck School of Medicine of USC, has three more years here of internship and residency, but thinks every day about going home to Kenya.

It’s not that she doesn’t like Los Angeles. Its palm trees and pleasant weather remind her of the coastal city of Mombasa and are a welcome change after her five years in Boston, where she studied biology at the University of Massachusetts at Amherst.

Los Angeles, which feels like home, she said, is “very cosmopolitan and very Third World, just like Nairobi.”

And she is thrilled to be at USC, studying internal medicine and infectious diseases.

“County-USC hospital is great,” she said. “We see things there that other medical students read about in textbooks, and the patients are so grateful.”

But she longs to return to Kenya to start an HIV clinic. It’s a dream she shares with other bright young Kenyan doctors-in-training who are studying at other American medical schools. They e-mail and talk to each other about how that dream can become a reality.

Her mentor at USC was Ann Khalsa, formerly the director of training at the Rand Schrader Clinic at LAC+USC Medical Center. “I worked there any chance I could get,” Mugo said. “Kenya has a high HIV infection rate, and it’s not doing much to combat it. There’s a huge stigma associated with HIV, and it interferes with treatment.”

Even in her own family, which includes Western-educated, sophisticated college graduates, there was silence when a relative died of AIDS. Mugo found out the true cause of her relative’s death much after the fact and was told only because she was studying to become a doctor.

Here, Mugo said, she sees firsthand what a concerted effort between the government and a university can accomplish in treating those infected with HIV. “It’s amazing to me what a huge difference it can make to patients. People who can’t afford medicines still get help and follow up and live productive lives for years and years. If we had just half these resources in Kenya, how many people could we save?”

It is this thought that runs through her mind every day. “This can be done,” Mugo said. “Our people just drop like flies and it’s preventable.”

In her years remaining here, her goal is to establish links between USC and future efforts in Kenya.

Students and faculty could come and work in a clinic, she theorizes, and university experts could help with the facility’s design or figure out how to computerize records. “If I could maintain a relationship with the school, it could help so much,” she said.

Her parents Wilson and Esther live in Thika, about 45 minutes north of Nairobi. Her father, a Yale-educated physician, is now retired, and her proud parents were in the Shrine Auditorium when she received her medical school diploma on Mother’s Day.

A World Away From Home