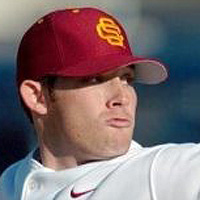 Ian Kennedy went 24-12 in his three-year career with the Trojans.

USC junior All-American pitcher Ian Kennedy was selected by the New York Yankees in the first round (21st overall) of the 2006 major league baseball draft today.

Kennedy becomes the 39th player in USC history and the seventh since 1995 to be picked in the first round.

Kennedy went 24-12 in his three-year career with the Trojans, compiling a 3.09 ERA and 380 strikeouts. He finished third all-time at USC in career strikeouts behind Rik Currier (449) and Seth Etherton (420). Currier was a sixth-round selection by the Yankees in 2001.

He also finishes second all-time in strikeouts per nine innings (10.99) behind Chicago Cubs’ pitcher Mark Prior (11.52).

In his 2005 sophomore season, Kennedy earned All-America honors after going 12-3 with a 2.54 ERA. He was named Pac-10 Conference Pitcher of the Year and led the nation in strikeouts.

Kennedy was a two-time U.S. National Team member, becoming just the fifth Trojan to play in back-to-back seasons. Last summer, he went 4-1 with a 2.89 ERA for Team USA in five starts. He tossed seven no-hit innings against Chinese Taipei on July 15, 2005, in Taiwan, striking out nine and walking two in a 1-0 victory.

Kennedy Taken in First Round of Baseball Draft