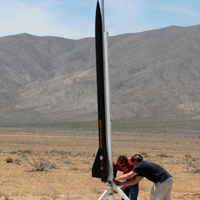 A 12-foot rocket named Del Carbon � built from scratch by undergrads � reached its planned altitude of 7,000 feet on May 20.

It came down to two semesters, two all-nighters and a 10-second countdown.

On May 20 at the Koehn Dry Lake launch site in the Mojave desert, a 12-foot rocket named Del Carbon � built from scratch by a passionate group of USC Viterbi School of Engineering undergrads � rose steadily despite severe wind, reaching its planned altitude of 7,000 feet before deploying its parachute and returning gently to earth.

The wind blew it a mile and a half from the launch site, making a long desert hike for team founder Ian Whittinghill and his colleagues. But Del Carbon (the name is a word play on the rocket’s carbon-fiber construction and a Del Taco location that was the team’s late-night sustenance stop) is now being readied for another launch before the end of July.

Whittinghill is a junior majoring in aerospace engineering at the USC Viterbi School who plans to do a year of graduate work after graduation. His goal before he leaves is a USC student rocket that will make it into space, internationally defined as an altitude of 100 km (or 62 miles, equal to 328,000 feet) within the next two years.

Creating Del Carbon was a long labor of love for Whittinghill, a second-generation rocketeer. His father George is the founder of Whittinghill Aerospace, an engineering firm in Camarillo. “My dad and I would take lots of trips out to the desert,” where they tested rockets.

His interest led him to USC, where during his sophomore year, he began a persistent effort to form a club that set out to launch a rocket. He found an ally in associate professor Daniel A. Erwin of the astronautics division. “I said I’m interested in starting a group to look at experimental propulsion technology,” Whittinghill recalled, “a group that will get its hands dirty.”

Said Erwin, “Ian was not the first person to want to put together a student space group. But he was the first who really had the background to do it. We’d fired little rockets before, but nothing like what this group has done.”

With help from the USC Viterbi School external relations department, Erwin was able to get a two-year grant from the Lord Foundation. He also found a place to put the rocket together. “Rockets are long, so the space had to be a little unusual.”

Finally, Erwin was able to give one unit of class credit for participation in the project, “analogous to the AME racing team.” In July 2005, he gave Whittinghill the go-ahead.

“So in the fall of the school year, I started spreading the word,” said Whittinghill.

About two dozen people signed up � and, remarkably, more than a dozen persistently hung around through two years of work.

The rocket was “totally scratch-built” by hand, piece by piece from carbon fiber. Whittinghill’s father pitched in with access to computer based analysis tools.

For the engine, another second-generation rocketeer club member, freshman David Reese, supplied a small solid fuel engine. Lab manager Paul Giuliano, a sophomore, worked with industry to order supplies and get them in on time. Freshman Chris McNutt tackled the arduous task of polishing the nose.

Endless hours of work led to the May 20 launch. “I am so grateful to the Viterbi School and our funders for all their trust and faith. We owe them a debt,” said Whittinghill, who explained that the next step will be developing a full-size engine, a “hybrid” combination of liquid and solid fuel that’s much safer than liquid and much more powerful than solid fuel.

According to Erwin, such engines are still new in the field, and much remains to be learned. Some students from the project may find their way into peer-reviewed engineering publications, Erwin believes.