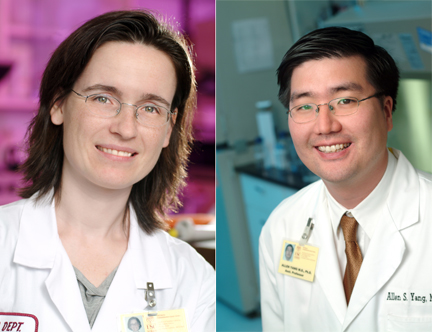 Two USC researchers received prestigious awards this week at the annual meeting of the American Society of Clinical Oncology (ASCO) in Atlanta.

These awards are given to physicians in their second, third, or fourth year as full-time faculty members in a university setting. Each winner will receive a three-year grant totaling $170,100 to test a hypothesis or accomplish intended research.

“The award is very important in helping new clinical scientists build their careers,” said Yang. “It provides three years of funding, which will be very important, especially with cutbacks in other funding sources.”

The Keck School of Medicine was one of only three institutions that had multiple awardees.

“ASCO is committed to supporting clinical investigators early in their careers by encouraging and rewarding their development of promising research initiatives in all areas of cancer treatment,” said Ross C. Donehower, chair of ASCO’s Grants Selection Committee.

The ASCO Foundation Grants Program selects leading young clinical oncologists across a broad range of specialties from around the world. The program is one of the largest among professional medical societies.

Since 1984, ASCO has awarded more than $35 million to approximately 450 deserving researchers, including more than 100 Clinical Research Career Development awardees and more than 350 Young Investigator awardees.

“Both Yang and Aparicio are young physician researchers who exemplify the power and possibility of translational research underway at our outstanding USC/Norris Comprehensive Cancer Center,” said Edward Crandall, chair of the Keck School Department of Medicine and the Kennth T. Norris Jr. Chair in Medicine.

On the clinical side, Yang is developing a program to offer trials of investigational therapies, based in epigenetics, to patients with hematologic malignancies that have resisted traditional medications.

Yang was enrolled in the rigorous M.D./Ph.D. program at the Keck School. While learning to treat patients, he also delved into the basic science behind cancer’s inner workings. He joined the lab of USC/Norris Director Peter Jones, an expert in the still-nascent field of DNA methylation, who became his mentor.

DNA methylation locks certain genes. The locked-up genes are unable to stop cells from growing out of control, which results in cancer.

Yang developed a sensitive test to show how strongly the chemotherapy drug decitabine stifled DNA methylation in each patient. The test provides insight into how the drug acts, and Yang hopes it will help oncologists use decitabine effectively in the future.

Aparicio pursues similar translational goals in solid tumors. As a fellow, she conducted some of the cancer drugs’ first clinical trials at USC/Norris, evaluating them in patients with melanoma, breast cancer and other solid cancers.