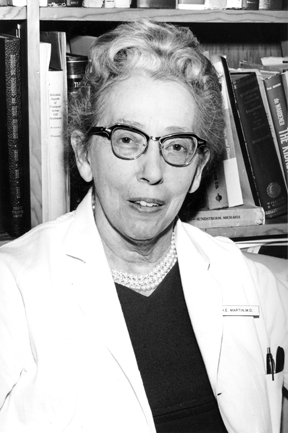 Helen Martin, a pioneer in diabetes care whose strong ethos of top-notch patient care influenced generations of doctors in training, died on June 3, just weeks after her 100th birthday.

Martin, whose childhood bout with polio left her dependent on a cane, spent much of her early years in hospitals and decided then that medicine was her calling. She didn’t have the support of her parents, however, who opposed her decision out of concern that the profession would be too physically demanding.

In a display of the grit and determination that she would become known for, Martin doggedly pursued her goal. She earned her bachelor’s degree from Pomona College, spent a year working at Massachusetts General Hospital and returned to California in 1929 to become one of five women in her class at the USC School of Medicine.

After graduation, Martin completed a demanding internship and residency in internal medicine at the Los Angeles County General Hospital. But with the Great Depression came a paucity of opportunities for physicians. Her choices limited, Martin accepted a teaching position in the medical school’s Physiology Department and taught there for four years. She also taught on the hospital wards of County Hospital.

Martin became a full-time clinical instructor in 1941 and, as the nation braced for war, soon found herself carrying the majority of the work load as many of her colleagues left to serve in the armed forces.

“She really did the work of seven or eight people,” said Phil Manning, a former student of Martin.

“She established a discipline in the entire medical school that mediocre care [was] not an option. Every patient … must get the best possible care. That was emphasized over and over again. She insisted upon it,” said Manning, emeritus professor of medicine and former associate vice president of health affairs at USC.

Robert Tranquada, another colleague who became the Los Angeles County Hospital’s medical director in 1969 and later dean of the USC School of Medicine, hailed Martin as “one of the best role models that I have ever seen in medicine for students, faculty, certainly for myself in terms of emphasis on the patient.”

This standard of excellence—and the acceptance of nothing less in those around her—would, over the years, grant Martin the status of a legend at the medical school. Letters written by former students to honor her 100th birthday reflect the indelible impression she left on the scores of doctors she trained.

Samuel K. Wirtschafter, class of 1957, wrote: “I think back today about the fear and trepidation I had concerning living up to the high standards she always insisted we have in the care of our patients. In doing this, she imparted to me the love, excitement and privilege of practicing medicine.”

Sol Bernstein, a member of the class of 1956 and former medical director of the Los Angeles County Hospital, characterized her as the “ideal physician” in his letter, while Gershon Lesser, class of 1962, described her as the “Mother Theresa of medicine.”

Aside from being an outstanding mentor, Martin was a medical pioneer. In the late 1940s, she contributed to the creation of the first homemade artificial kidney by Robert Maronde. It used a stainless steel beer keg as the reservoir. She also did seminal research on fluid and electrolytes.

Martin’s legacy extended to the classroom as well. She taught a memorable Survey of Disease course that linked basic science concepts with clinical medicine. Martin also organized a program—dubbed the “Couth Course” by the students—that exposed budding physicians to the humanities, thereby broadening their perspective. The sessions included readings by actors, piano recitals, short films, dance performances and slide shows from famous explorers.

Martin became a full professor of medicine in 1954. She was also named a Los Angeles Times “Woman of the Year” in 1964 and retired in 1968. But her service to the hospital did not stop there. Over six years, she painstakingly compiled a history of LAC+USC Hospital. The richly detailed 566-page volume was published in 1979.

During an interview in 1996, Martin said, “I really found medicine a fascinating career, and I can truthfully say that I got up every morning looking forward to going to the hospital because I never knew what was going to happen.”

A voracious reader, Martin was active in her book club and still found time for another of her consuming passions—USC football.

Manning stated it this way: “She had always been a woman who was not limited to what she did in medicine. She was a true Renaissance giant.”

Martin, who had no children, lived in Pasadena.

Donations in her honor may be made to the Helen E. Martin Endowed Scholarship Fund, which was created in 1969 with a gift of $10,000 from friends in the Professional Staff Association. Donations may be sent to: Keck School of Medicine, Office of Development, Attn: Michael Mayne, Alumni and Constituent Relations, 1975 Zonal Avenue KAM 300, Los Angeles, CA, 90089.