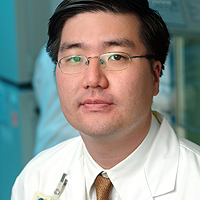 Two Keck School of Medicine of USC researchers received prestigious awards at the annual meeting of the American Society of Clinical Oncology (ASCO) in Atlanta.

The awards are given to physicians in their second, third, or fourth year as full-time faculty members in a university setting. Each winner will receive a three-year grant totaling $170,100 to test a hypothesis or accomplish intended research.

“The award is very important in helping new clinical scientists build their careers,” Yang said. “It provides three years of funding, which will be very important, especially with cutbacks in other funding sources.”

The Keck School of Medicine was one of only three institutions that had multiple awardees. The ASCO Foundation Grants Program selects leading young clinical oncologists across a broad range of specialties from around the world. The program is one of the largest among professional medical societies.

Since 1984, ASCO has awarded more than $35 million to approximately 450 researchers, including more than 100 Clinical Research Career Development awardees and more than 350 Young Investigator awardees.

On the clinical side, Yang is developing a program to offer trials of investigational therapies, based in epigenetics, to patients with hematologic malignancies that have resisted traditional medications.

As a fellow, Aparicio conducted some of the cancer drugs’ first clinical trials at the USC/Norris Comprehensive Cancer Center, evaluating them in patients with melanoma, breast cancer and other solid cancers.