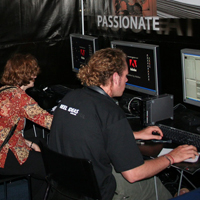 Kathy Smith, left, chair of the school’s John C. Hench Division of Animation & Digital Arts, led the program along with three other mentors.

This year’s Cannes film festival gave a trio of USC School of Cinema-Television students a chance to produce daily broadcasts and award-winning documentaries of the event.

Sponsored by Adobe Systems, some 50 students were broken into 14 teams for the 2006 American Pavilion Student Filmmaker Program. The competition chronicled the glitz and the glamour, as well as the grit and the grime, of the festival, which ran May 17-28.

Kathy Smith, chair of the school’s John C. Hench Division of Animation & Digital Arts, led the program along with three other mentors from film schools in California and Canada.

“It was a phenomenal experience,” said Smith, who left for France shortly after the cinema-television commencement ceremonies on May 12, to attend the workshop.

Using Adobe Production Studio, Smith and her colleagues focused their teaching on the art of storytelling and how to incorporate animation into their pictures. “The minute we all arrived, we hit the ground running,” she said.

USC cinema-TV students Susannah Kondrath ’06 and Rajiv Smith-Mahabir and Julie Pifher (both seniors this fall) were among those producing five-minute broadcasts that included a brief documentary. Pifher and Kondrath, respectively, were members of the teams that produced the best documentary and best-in-broadcast category.

The USC students’ work can be viewed via Adobe’s Web site at https://www.adobe.com/go/cannes.

“It was all about creativity,” Smith said.