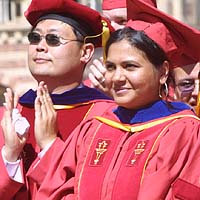 Members of the class of 2006 accepted positions in Fortune 500 companies as well as startup ventures.

Recent USC Marshall School of Business graduate Aimee Anderson had a lot to be thankful for this past Thanksgiving.

When the senior business major went home for the holiday, she had a job offer from Kraft Foods in hand. By the end of the fall semester, she had another offer, one from Gallo Wines, which she accepted.

“I had always heard it was hard to get jobs, Anderson said. “But most of my friends had jobs before they graduated.”

When Anderson began college in 2002, the economy was sluggish and grads had a hard time finding work after commencement. But that has changed. The class of 2006 was one of the most highly recruited in recent years, with some students, like Anderson, offered multiple jobs and signing bonuses.

“We really saw an increase this year,” said Eileen Kohan, head of the Career Planning and Placement office, who estimates that 20 percent more recruiters visited campus this year over last. “Students really had more options.”

And what happened at USC can be seen across the country. The National Association of Colleges and Employers (NACE) reports that college hiring was up nearly 14 percent for the class of 2006.

And the organization already is predicting that 2007 will be another strong year, based on estimates from recruiters around the country.

This year more than 600 companies recruited on campus, looking to fill jobs in a variety of fields. Members of the class of 2006 accepted positions in Fortune 500 companies as well as startup ventures. As in years past, Teach for America was the largest employer of USC graduates. Starting salaries for the most competitive jobs were in the mid-$50,000 dollar range, Kohan said.

“USC students have a wide variety of opportunities in the job market, particularly in Southern California, which is very large and very diverse,” Kohan said.

And this year USC saw more recruiters from out of state, particularly from Las Vegas, which offers students high-paying jobs and a lower cost of living.

While job-specific skills such as accounting, engineering or language skills can help set candidates apart, Kohan said the strength of a broad liberal arts degree should not be underestimated.

“Employers value liberal arts students because their majors help develop key skills that translate to success in the workplace,” she said. “They tend to be strong communicators, analytical and able to work well with others.”

For those just beginning their job search, Kohan offered some tips:

“Be able to articulate your skills for prospective employers and study the specific companies and industries you are interested in,” she said. “Also, look for opportunities to network with family and friends.”

And it is never too early to start thinking about the future. Kohan said that 60 percent of students who had job offers by graduation had participated in internships during college.

Anderson said that years of internships in the financial industry had an unintended consequence by helping her rule out the pursuit of a career in that field.

That was not surprising to Kohan, who said today’s students today are not just after a paycheck.

“This generation wants balanced lives and time to spend with their families or on outside interests,” she said.

As it turned out, Anderson did not take the best-paying job she was offered. She took the one she felt was a better fit for her personality.

“I just felt right,” she said. “I felt very comfortable there.”

While eager to start in the corporate world, Anderson is not leaving school behind. Like most recent graduates, she plans to earn an advanced degree in the next five to 10 years.

And she still has some studying to do. Her new employer has its own required course � an education in fine wines.