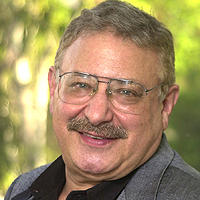 The brain’s craving for a fix motivates humans to maximize the rate at which they absorb knowledge, said USC College neuroscientist Irving Biederman.

Neuroscientists have proposed a simple explanation for the pleasure of grasping a new concept: The brain is getting its fix.

The “click” of comprehension triggers a biochemical cascade that rewards the brain with a shot of natural opium-like substances, said Irving Biederman, professor of neuroscience in USC College, who presents his theory in an invited article in the latest issue of American Scientist.

“While you’re trying to understand a difficult theorem, it’s not fun,” Biederman said. “But once you get it, you just feel fabulous.”

The brain’s craving for a fix motivates humans to maximize the rate at which they absorb knowledge, he said.

“I think we’re exquisitely tuned to this as if we’re junkies, second by second.”

Only more pressing material needs, such as hunger, can suspend the quest for knowledge, he added.

The same mechanism is involved in the aesthetic experience, Biederman said, providing a neurological explanation for the pleasure we derive from art.

“This account may provide a plausible and very simple mechanism for aesthetic and perceptual and cognitive curiosity.”

Biederman’s theory was inspired by a widely ignored 25-year-old finding that mu-opioid receptors � binding sites for natural opiates � increase in density along the ventral visual pathway, a part of the brain involved in image recognition and processing.

The receptors are tightly packed in the areas of the pathway linked to comprehension and interpretation of images, but sparse in areas where visual stimuli first hit the cortex.

In a series of functional magnetic resonance imaging trials with human volunteers exposed to a wide variety of images, Biederman’s research group found that strongly preferred images prompted the greatest fMRI activity in more complex areas of the ventral visual pathway. (The data from the studies are being submitted for publication.)

Biederman also found that repeated viewing of an attractive image lessened both the rating of pleasure and the activity in the opioid-rich areas. In his article, he explains this familiar experience with a neural-network model termed “competitive learning.”

In competitive learning (also known as “Neural Darwinism”), the first presentation of an image activates many neurons, some strongly and a greater number only weakly.

“One advantage of competitive learning is that the inhibited neurons are now free to code for other stimulus patterns,” Biederman writes.

This preference for novel concepts also has evolutionary value, he added.

“The system is essentially designed to maximize the rate at which you acquire new but interpretable [understandable] information. Once you have acquired the information, you best spend your time learning something else.

“There’s this incredible selectivity that we show in real time. Without thinking about it, we pick out experiences that are richly interpretable but novel.”

The theory, while currently tested only in the visual system, likely applies to other senses, Biederman said.

Edward Vessel, who was Biederman’s graduate student at USC, is now a postdoctoral fellow at the Center for Neural Science at New York University. Vessel collaborated on the studies and co-authored the American Scientist article.