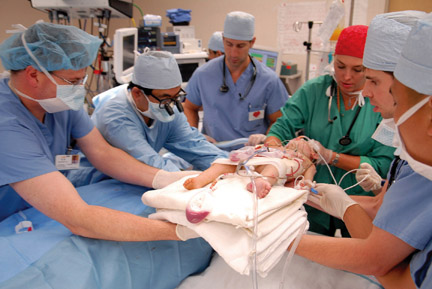 Ten-month-old twin sisters Regina and Renata Salinas Fierros slept in their own beds for the first time last week after the formerly conjoined sisters were successfully separated during 22 hours of surgery.

A team of nearly 80 staff at Childrens Hospital Los Angeles—including general, orthopaedic and plastic surgeons and anesthesiologists from the Keck School of Medicine of USC, as well as nurses, and other caregivers and specialists—successfully separated the girls, who were joined at the mid-abdomen and pelvis and facing each other.

“Seeing the girls today beginning to wake up and move and respond is really exciting for us all,” said James E. Stein, the pediatric surgeon who led the operation, at a press conference.

Regina and Renata were a type of conjoined twins known as ischiopagus twins, which are among the rarest and most complex to separate because they involve many organ systems. The girls shared a liver, intestines, and urinary, reproductive, vascular systems. Their pelvic bones were also fused.

Regina and Renata were considered the ideal age to undergo the surgery, said Stein. “Their tissues and bones at this age tend to be both firm and pliable enough—and also of a reasonable size—to manipulate them easily,” Stein said. “If the surgery were not performed, the twins’ anatomy would begin to limit their quality of life over time—taking away their individuality, their ability to walk and to develop normally. There are psycho-social issues of separation and identity involved in separating conjoined twins more than one-year-old.”

The surgical team began the series of operations on June 14 at 6 a.m. and concluded 22 hours later. Stein was joined by Keck School surgeons Cathy Shin and Donald B. Shaul.

Other Keck faculty included: Dominic Femino, who led the orthopaedic team; John Gross, plastic surgery team leader, and; William McIlvaine, who was in charge of the anesthesia team.

The girls’ mother, Sonia Fierros, 23, said that it was strange to see them lying in their own beds. “It’s weird because I was used to seeing them together,” she told the Los Angeles Times in Spanish through a translator. “I can’t wait to hold one in this arm and one in the other,” Fierros said.

Fierros said she used to sing the girls a lullaby before the surgery about a day when they would sleep in their own beds, far away from each other.

The girls’ father, Federico Salinas, 36, told the Los Angeles Times he was overjoyed by the successful separation. The couple said they will return to their home in Mexico when the girls have recovered.

The girls were born at LAC+USC Medical Center on August 2, 2005, and were transferred to Childrens Hospital Los Angeles the following day. They have been seen regularly at Childrens since their birth, and underwent various diagnostic procedures, a reversible colostomy and the insertion of “tissue expanders” to gain additional skin and soft tissue to close the open wounds after the separation surgery.

Stein previously led the team that successfully separated another set of conjoined twins at Childrens Hospital on Sept. 11, 2003, in a rare, highly complex and historic procedure. Those twin girls, who were known publicly as ‘Baby A’ and ‘Baby B’ to protect their identities as wards of the court, were a similar type of ischiopagus twins. Those girls, along with their triplet sister, have been adopted and continue to thrive together in another state.