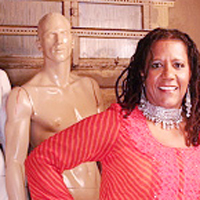 The work of Judi Henderson-Townsend has received awards from the Environmental Protection Agency and Wells Fargo Bank.

Judi Henderson-Townsend recycles stiffs for a living. What’s more, she plans to give them new brains.

The 1978 journalism alum is no demented scientist. The Oakland, Calif., resident is a mannequin liquidator, heading a five-year-old business, Mannequin Madness, that recycles more than 100,000 pounds of used mannequins each year.

“They are large, bulky objects that don’t belong in landfills,” she said.

She has received awards from the Environmental Protection Agency and Wells Fargo Bank, but earlier this year, she bested 2,300 other small businesses nationwide for a $100,000 technology grant from Intel.

The competition included three elimination rounds, with five finalists flown to New York City to give 15-minute presentations to a panel of judges. “It was like ‘American Idol,’ ” Henderson-Townsend said. “We found out within the hour what the verdict was.”

Her winning technology wish list included radio frequency identification tags to implant in the approximately 1,500 mannequins stored in the warehouse at her home. The high-tech tags will allow her to track inventory. She also proposed moving her headquarters to New York City, with satellite offices staffed by employees with wireless laptops and Webcams, the better to make long-distance decisions on buying mannequins.

The company purchases mannequins when stores close or remodel. Some dinged and damaged dummies are sent out for repairs, and others are sold as is. “Some customers just want parts for art projects,” Henderson-Townsend said. “People like to make those mannequin leg lamps, for example.”

Mannequin Madness sells used mannequins at about 30 to 50 percent of the cost of a new one. Customers include trade shows, nonprofit groups holding fund-raising auctions, theater groups, small clothing stores and even high-end stores seeking vintage mannequins. Trial lawyers also purchase mannequins to demonstrate in court where a person was shot or stabbed, she said.

Henderson-Townsend is thrilled about the Intel grant money, which she can use for information technology products, services and training, and grateful that her banker persuaded her to enter the contest.

“If I had known how many others were competing, I’m not even sure I would have put my hat in the ring.”

Worth an Arm and a Leg