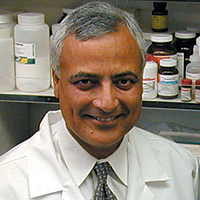 Parkash S. Gill, professor of medicine in the Keck School of Medicine, was the study’s senior author.

A protein that allows breast cancer cells to evade the body’s natural immune responses could be a target of future cancer therapies, according to a study by scientists in the Keck School of Medicine of USC.

The study, published in the July 1 issue of the American Journal of Pathology, is the first to identify how EphB4 � a protein that sits on the surface of cells � functions.

“The important aspect of this study is that … if we turn the protein [EphB4] off, the tumor cells die, which means that its function helps the cancer cells survive,” says Parkash S. Gill, professor of medicine in the Keck School and the study’s senior author.

“The first step was to identify whether it’s there [on cancer cells], and how often,” he explained. “We found that it was present on 60 percent of the tumors … and it’s expressed from the very first stage of the cancer formation.”

The next step was to determine EphB4’s purpose. What the scientists discovered was that EphB4 serves as a sentry, guarding the tumor cells from any defenses the body deploys to attack them.

“There are means in the body to kill tumor cells,” Gill said. “[If] you block those, then you give the cells the opportunity to survive and grow.” Not only did EphB4 block those defenses, but it helped the cancer cells flourish by issuing a call for more blood vessels � the biological equivalent of food for the tumor.

The goal of a future anti-cancer therapy would be to block the protein, essentially knocking out one of the tumor cell’s guardians. A similar approach was used to develop Herceptin, one of the first biological treatments for breast cancer.

Herceptin targets the her2 protein, which is found on the surface of tumor cells about 20 percent of the time, Gill said.

The her2 protein played a role in this study as well. That protein, along with several of its cousins, was found to activate EphB4, he said. “There are certain growth factors that can make this particular protein [EphB4] go up,” Gill said. “We are learning more about how this protein is turned on and off in a cancer cell.”

The study was funded by the Entertainment Industry Foundation’s Women’s Cancer Research Fund and the National Institutes of Health.