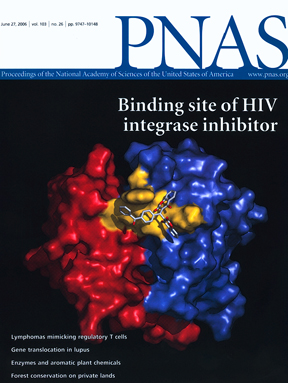 A study by USC School of Pharmacy researchers describing a new drug-binding site in HIV appeared as the cover story in the June 27 issue of Proceedings of the National Academy of Sciences.

A study by Nouri Neamati, assistant professor of pharmaceutical sciences at the USC School of Pharmacy, and his research group is featured on the cover of the June 27 issue of the Proceedings of the National Academy of Sciences. The study identifies a new drug-binding site in a viral enzyme critical for HIV replication.

“Integrase plays a key role in the viral replication cycle,” said Neamati. “Targeting this enzyme with a viable drug has the potential to reduce the viral load in infected individuals, and act synergistically with currently used drug regimens.”

Neamati’s group used an interesting approach to discover the inhibitor-binding site. Since the enzyme they were studying was not amenable to traditional techniques including X-ray crystallographic or nuclear magnetic resonance, the group devised an alternative study route. First, the researchers irreversibly attached the inhibitor to the viral enzyme, integrase, using ultraviolet light. Then the binding site was identified using mass spectrometry and validated through mutagenesis and enzymatic assays. According to the published article, the group also conducted molecular modeling studies to gain insight into how the small molecule actually inhibits the viral enzyme.

“Nouri’s ability to utilize molecular modeling tools at the computer in combination with his expertise in biochemistry and cell biology at the bench have enabled him to establish a unique niche in the design of new drugs for the treatment of AIDS,” said Sarah Hamm-Alvarez, the Gavin S. Herbert Professor of Pharmaceutical Sciences and interim chair of pharmaceutical sciences at the School of Pharmacy.

Currently, there are no FDA-approved drugs targeting integrase for HIV treatment. While three other molecules have entered clinical trials over the past five years, these molecules are all suspected to bind to the active site of the enzyme.

Remarkably, the inhibitor used in Neamati’s study was found to bind to a completely different area of the integrase enzyme, not the active site.

This is the first study to identify an alternative drug-binding site in the protein, providing a new site for HIV drug design strategies. Such discoveries could make a major impact in the design of future antiviral drugs and the field of HIV drug design targeting integrase.”

Integrase is a multi-subunit enzyme, meaning that it requires multiple copies of itself to work correctly. Once the inhibitor binds to integrase, it appears to disrupt the subunit formation, therefore stopping integrase from working.

This study is the first to describe a small molecule inhibitor with the potential to disrupt integrase formation.

“We predict that small molecule inhibitors designed to bind to this new site that we identified will work in unison with existing drugs,” said Laith Al-Mawsawi, a Ph.D. candidate in pharmaceutical sciences who is the first author on the paper.

Neamati is a leading researcher in the HIV-1 integrase drug design and development field. This article, his fourth on integrase to be published in the Proceedings of the National Academy of Sciences, was accepted as direct submission to the journal.

The research was predominately conducted at the USC School of Pharmacy in collaboration with scientists from the University of North Carolina in Chapel Hill, the Katholieke University in Flanders, Belgium and the Medicinal Chemistry Laboratory of the National Institutes of Health in Frederick, Maryland.