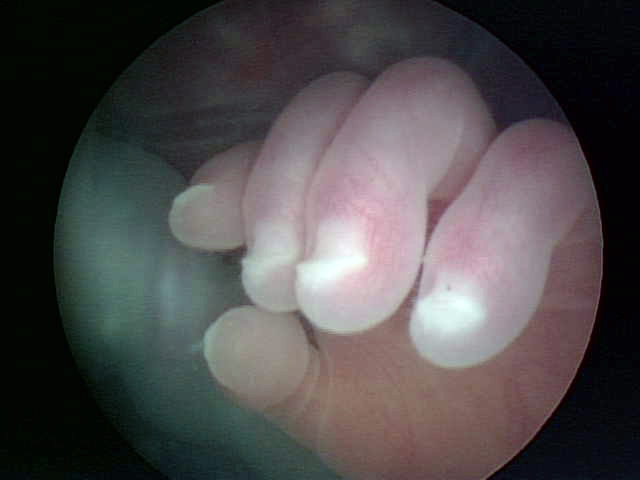 One of the babies’ hands can be seen in a fetoscopic image taken during a life-saving surgery to equalize the blood flow delivered to each twin.

Two healthy twin boys born via caesarean section last week were saved by state-of-the art surgery performed in utero by Ramen Chmait, assistant professor of clinical obstetrics and gynecology at the Keck School of Medicine of USC and director of fetal therapy within the Childrens Hospital Los Angeles-USC Institute for Maternal–Fetal Health (IMFH).

The babies and their mother were the first in utero surgery patients at the IMFH and launched the institute as one of only a few facilities nationwide—and the only one in Los Angeles —offering in utero surgeries.

Chmait performed Operative Fetoscopic Laser Therapy in March when the mother was 20 weeks pregnant to treat Twin-Twin Transfusion Syndrome (TTTS), a life-threatening condition in which identical twins who share a placenta do not share the blood supply evenly. The shared placenta contains abnormal blood vessels that connect the umbilical cords and circulations of the twins. Unequal blood between the twins via the communicating blood vessels leads to TTTS, which usually results in the death of at least one if not both fetuses.

Operative Fetoscopic Laser Therapy uses laser energy to remove the connecting blood vessels on the surface of the placenta so that the babies’ blood is no longer shared. Using local anesthesia, a 3.3 millimeter scope is placed into the uterus through a tiny hole in the skin. The small connecting blood vessels can then be visualized and closed using laser energy from a small fiber optic passed inside of the scope.

After the surgery, “all the previous blood flow pattern abnormalities resolved,” said Chmait. “The babies were able to grow normally, and the problems caused by TTTS resolved.”

Lizbeth Erazo, 30, delivered the identical twin boys at 36 weeks at Hollywood Presbyterian Medical Center. The first boy weighed in at 4 lbs. 15.6 oz. and the second weighed in at 5 lbs. 13.2 oz. The babies went to the Neonatal Intensive Care Unit for observation and the mother to recovery. All are doing well, according to hospital representatives.

“I am grateful to Dr. Chmait, the nurses and the hospital. If it wasn’t for this program, there would be no hope for my babies,” said Erazo.

Chmait performed more than 200 surgeries in utero during his tenure at the Fetal Surgery Program at St. Joseph’s Women’s Hospital in Tampa, Fla. To prepare the USC staff for the intricate surgical procedure, he practiced with the team in six complete mock surgeries before performing the first in procedure in Los Angeles.

Since the March surgery on the twins, he has performed more than 14 operations here in Los Angeles as part of the CHLA-USC Institute for Maternal-Fetal Health.

“It has been a long term goal of ours to expand services at the IMFH into minimally invasive fetal surgery and we were fortunate to be able to attract one of the few perinatologists in the world with Dr. Chmait’s skills,” said T. Murphy Goodwin, chief of maternal-fetal medicine at the Keck School and co-director of the IMFH. Goodwin worked closely with David Miller, associate professor of medicine and medical director of the IMFH, to recruit Chmait to join USC and expand the services. “The IMFH is now capable of providing the full spectrum of cutting edge prenatal diagnostic and therapeutic options through one tightly coordinated team, a service unique in the Los Angeles area,” he said.

The Institute for Maternal-Fetal Health, based at Childrens Hospital Los Angeles, is a cooperative program between CHLA and the Keck School.

The Institute’s Diagnostic Perinatal Program and its Minimally Invasive Fetal Surgical Program are based at Hollywood Presbyterian Medical Center and next to Childrens Hospital Los Angeles. The Institute is now entering its fourth year of operation.

USC physicians save twins’ lives in rare in utero surgery