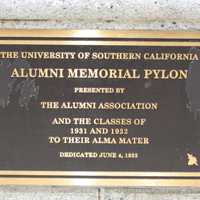 Text at the bottom of the pylon

Once standing proudly at the main campus entrance at University and Hoover, this classic limestone and granite column lost its prominence when traffic was moved decades ago to Jefferson Boulevard.

But the pylon, a gift from the classes of 1931 and 1932 and the General Alumni Association, speaks to us still, said university archivist Claude Zachary. It has four words carved around its shaft at eye level: Courage, Service, Devotion, Fidelity.

Dedicated at the height of the Great Depression, it represents a $6,000 investment in the glory of learning at a time when money was tight.

The octagonal pylon was designed by the USC College of Architecture, whose dean at the time, Arthur C. Weatherhead, explained its significance.

Great European cities have such monuments as the center of important squares, he wrote, but they have not been used extensively in America.

“The Trojan column is decidedly a modern creation,” he noted. “It is heavy and strong to harmonize with our Romanesque forms on the campus.”

Weatherhead then decoded its symbolism: The monumental shaft and great pedestal stand for weighty significance. Its lines pointing upward characterize the lofty ideals of our institution. The beautiful book forms around the pedestal, the ornate university seals and the crowning torch of learning all speak to the importance of scholarship.