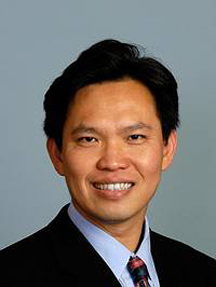 In fact, he works at finding them. And then he works inside them.

As director of the Doheny Laser Vision Center, Huang came to USC two years ago from the Cleveland Clinic and is breaking new ground when it comes to eye surgery and eye imaging in very, very small spaces.

OCT is an imaging technique that uses light waves to create an image of very, very small portions of the eye—usually the retina—much like sound waves are used in an ultrasound or X-rays in a CT scan. By measuring how the light waves are reflected in a sequence of several hundred scans across the retina, OCT can measure such things as a map of retinal thickness. OCT is now a common technique for imaging and measuring internal eye structures with microscopic precision.

Then there is his work with Verisyse phakic intraocular lens implants, an ultra-small lens that is inserted behind the cornea inside the eye. Used in Europe for almost two decades to correct severe nearsightedness, phakic implants were only approved by the U.S. Food and Drug Administration in 2005.

Last year Huang, also an associate professor of ophthalmology at the Keck School of Medicine, began implanting the lens in patients whose vision problems were too severe to be fixed with traditional LASIK surgery. “There’s very little room for the lens,” he admitted.

But the beauty of this procedure, if measurements show there is enough room in the eye to fit the lens without touching the natural lens or the cornea, is that this tiny plastic implant can restore vision enough so that people who had thick glasses can be completely free of glasses and contacts.

“Most people who are highly nearsighted have a longer eye, so generally they have a little more room in the eye and are good candidates for this,” Huang said. “These are people with Coke-bottle glasses, and now we have options for them.”

He added, “It’s an outpatient surgery, just like cataract surgery, only we don’t take out the lens, we just put an extra lens in the eye.”

Huang also performs Intacs implants for patients with very thin corneas or distorted corneas. “These are also people who are told not to have LASIK, that have vision distortion. We can reduce the distortion, lower their prescriptions and maybe get it to the point that someone who could not see to drive now can,” he said.

It is understandable that Huang, who holds a Ph.D. in medical engineering and medical physics from the Massachusetts Institute of Technology in addition to his medical degree from Harvard Medical School, would be excited about the new technologies.

He points to the example of “wavefront-guided” LASIK surgery, which is allowing vision correction for patients who might not have been good candidates before because they are too nearsighted or farsighted. “The advanced laser treatment patterns reduces ‘higher order aberrations’—a more complex pattern of optical defects than the usual nearsightedness or astigmatism,” he said. Wavefront-guided LASIK surgery can improve the quality of vision and reduce the side effects associated with conventional LASIK, such as blurriness or a halo or starburst when looking at street lights at night. This makes the biggest difference for people with high degrees of nearsightedness or farsightedness.”

An eye surgeon using wavefront technology begins by shining a beam of light into the eye, which measures reflection over several hundred locations in the eye. This gives a map that’s much more precise and much more complete.” The map is used for the LASIK procedure and reduces the side effects because of the hightened precision.

Huang performed his first laser vision correction during his residency at USC. He was recruited to be director of the Doheny Laser Vision Center, where he performs a variety of procedures, including LASIK and PRK with the CustomVue technology, Intacs intracorneal implants and natural lens replacement. He also is a specialist in corneal diseases and performs corneal transplantation and cataract surgery.

But even as much as he appreciates the possibilities and potential of the new technologies, what Huang really likes is the end result.

“Patients say this kind of surgery changes their lives,” he said. “People perceive their eyesight limitations as a handicap. It’s not as obvious as a wheelchair or crutches, but wearing thick glasses can make a person self-conscious and uncomfortable. There’s nothing like watching how improved vision changes someone’s life.”

USC ophthalmologist’s medical innovations are a sight for poor eyes