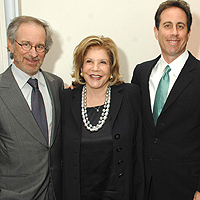 The USC Shoah Foundation Institute for Visual History and Education is moving forward with its plan to expand beyond the Holocaust and document survivor memories from other acts of genocide and oppression.

Calling the move an “important new phase,” Douglas Greenberg, a history professor at USC College and the institute’s executive director, said he and his colleagues are talking with peers in South Africa, Rwanda and Cambodia about collaborating on projects to document atrocities in those countries.

The announcement came during the institute’s annual Ambassadors for Humanity dinner in Los Angeles on April 23. Funds raised will benefit the institute.

Wallis Annenberg, vice president of the Annenberg Foundation, was honored for her philanthropy in promoting tolerance and cultural understanding worldwide. USC’s longest-serving trustee, Annenberg is also a member of the institute’s board of councilors.

The obligation to remember is a moral responsibility extending to all targets of racism in the modern world, Greenberg told an audience of 600 at the California Science Center.

“That is true whether they are Jews or Armenians or Cambodians or Rwandans or Darfuris,” Greenberg said, “or men and women in South Africa still living in the aftermath of apartheid and the struggle to destroy it. Or African-Americans who remember life in a viciously segregated society that called itself a democracy.”

Housed at USC College, the institute holds 52,000 video testimonies of Holocaust survivors in 32 languages collected in 56 countries. Thirteen years ago, filmmaker Steven Spielberg launched the foundation and it soon began collecting the testimonies. In 2006, the foundation joined the university and relocated from trailers on the Universal Studios lot to USC.

USC President Steven B. Sample listed for the audience the reasons USC welcomed a role in preserving the audiovisual testimonies, which, he said, “bear witness to the indomitable strength of the human spirit.”

“First, we knew that the visual histories would help advance important scholarship and teaching about the Holocaust,” Sample said. “Second, we believed that the personal and emotional testimonials would bring the past to life in a way that history books could not.

“And third, we realized that the testimonies would add to our academic strengths in interdisciplinary research and teaching, and in digital visual archiving.”

During the fund-raiser, three undergraduates told how working with the archive has benefited their education � and their lives.

“My understanding of not only the Holocaust, but the human condition has been broadened and strengthened,” said Darian Lopez, a College freshman. “Personally, by watching the testimony, I’ve been inspired to be a better person. No longer do I take the simplest things for granted. I truly want to be a change, a light in my world.”

In introducing Spielberg, host Jerry Seinfeld lightened the mood by joking about how nervous he was the first time Spielberg visited his home.

“To be Jewish and grow up in Long Island, and to know you’re having dinner with Steven Spielberg,” Seinfeld said. “I started to prepare my haftorah all over again. This was going to beat my bar mitzvah.”

Spielberg presented the award to Annenberg. In his remarks, Spielberg discussed a recent opinion piece in The New York Times by actor and playwright Harvey Fierstein. In it, Fierstein said the recent uproar over Don Imus’ racist remarks was hypocritical in a culture where prejudice and intolerance is commonplace.

Spielberg thanked Sample and Provost C. L. Max Nikias for the partnership: “The testimonies could only thrive in an educational environment in a great university.” He recalled when the then-foundation first contemplated a move to USC. He and Greenberg, who joined the foundation in 2000, took Annenberg on a tour of the archival site.

“For all of us, it was love at first sight,” Spielberg said. “Wallis got it. She really got it. She understood the significance of the work we were doing, and she also saw that our move to USC was essential to building a current home for our testimony. Wallis gave a significant contribution that allowed our move to go forward without delay.”

Spielberg said Annenberg has been equally as generous with other organizations throughout the world.

“Most deeply, we honor Wallis Annenberg for her example of generosity and moral commitment in a world that has far too few of either,” he said. “She is truly an ambassador for humanity.”

After receiving a standing ovation, Annenberg discussed her heritage, noting that her maternal grandmother, Rose Dunkelman, was the founder of the Zionist movement in Canada. Dunkelman’s son Ben fought alongside David Ben-Gurion (who became Israeli prime minister) for Israeli independence in 1948, she said.

“The Jewish experience, the struggle and the triumph, is my experience,” Annenberg said. “But the power of the Shoah (Holocaust in Hebrew) and the power of remembrance is more than a history lesson, more than a museum exhibit. It’s not even singularly Jewish in its import.”

Rather, she said, it is a warning.

“It’s a teaching to all people that the capacity for hatred, the drive for exclusion,” she said, “lies coiled in the human soul.”

The testimonies are permanent reminders to always be vigilant, she said.

“When the plain fact of the Armenian genocide, said to have influenced Hitler himself, is barely recognized by the international community, when hundreds of thousands can be exterminated in Rwanda by people who parroted the very rhetoric of the Nazis, when Jews are still not safe in our own homeland, we still need the awareness of the Shoah,” Annenberg said.

She said a child is not born wanting to hate or believing that difference must divide people; that must be taught.

“We must replace hate with love,” she said. “We must begin with ourselves. Each and every one of us.”

Some audience members were Holocaust survivors whose testimonies are included in the institute’s archive. Sigi Hart, 82, of Calabasas was one. At Auschwitz in 1943, Hart remembers being one of 13 men and teenagers ordered to step aside during one selection. The rest � several hundred � were led off to what Hart later learned was a gas chamber.

For the past 12 years, Hart has volunteered his services at the institute. Hart said the testimonies guarantee that those who perished in the Holocaust will never be forgotten.

“They are no longer here and cannot speak for themselves,” he said.