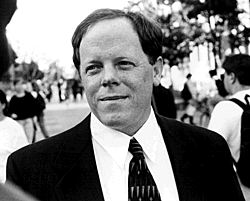 Joseph Allen: USC is among “the top 15 universities in the country in terms of attracting National Merit Scholars.”

The 1995 undergraduate population is even stronger in quality than last year’s incoming class, which was hailed as a banner group. Moreover, USC has achieved its undergraduate enrollment goals while carrying out a planned decrease in transfer student admissions.

By the third week of classes, the number of first-time freshmen (one measure of a university’s appeal to strong high school graduates) had jumped by 201 students from the previous year – up from 2,407 to 2,608, according to enrollment figures compiled by the Office of the Registrar.

The average grade point average for freshmen was 3.59, compared to last year’s 3.54. The average freshman SAT hit 1113, exceeding the university’s goal of 1100 for the second year. Last year’s average SAT was 1102.

“It’s really quite astounding to come up 10 points,” Allen said.

The number of Trustee Scholars, which typically hovers around 100 students, rose to 106. The number of National Merit Scholars, meanwhile, shot up from 76 to 115.

“That puts us in the top 15 universities in the country in terms of attracting National Merit Scholars,” he said.u0000

The number of transfers dropped by 294 students , from 1,766 last year to 1,472 this year, because the university was able to be more selective in the transfer students it accepted, Allen said. For instance, the university looked for the first time at high school performance. In the past, admissions looked only at how well the applicants had performed in college.

“We’ll always welcome transfer students, but students who stay with us for the full four years have a fuller USC experience – they take our GE courses, come to know the faculty better and have an easier time making the connections to fulfill their academic goals,” Allen said. “This year, we’re in an even better position to do this for more students.”

Despite these changes in the shape of the student body, its size differed little from last year. By design, the total number of undergraduates rose only slightly, from 14,534 in 1994 to 14,540 in 1995.

In explaining the successes, Allen credited an enrollment management approach to admissions. The approach, which he instituted three years ago when he joined the Office of Admissions and Financial Aid, balances economic and academic goals.

“Rather than simply setting an enrollment goal of getting as many students as we could find, we’ve tried an enrollment model that is closely tied to academic and quality goals,” he said.

The goal, Allen said, was to stick close to last year’s undergraduate enrollment levels, while increasing new freshmen by 100 students and decreasing transfers by 100 students.

“I was most nervous about the transfer students, but we exceeded our goals by a factor of three,” he said.

Efforts to recruit students from local public and preparatory schools were stepped up, because research shows that “for all the recruitment efforts made by colleges, most students still go to school within 100 miles of their home,” Allen said.

Enhanced cooperation between the Office of Admissions and Financial Aid and other academic units was another important factor in improving the quality of USC’s student body.

“Previously, coordination wasn’t so strong,” Allen said. “People in the many departments and schools of the university have also worked hard toward recruiting and retaining students.”u0000

One of the few disappointments in the enrollment figures was a drop among new master’s degree candidates. That figure fell by 290 students since last year, from 2069 to 1779.

During the 1993-94 academic year, non-doctoral students brought the university $104 million in tuition revenue, said Alice Parker, the dean of the graduate school.

The drop is unfortunate, as master’s students tend to pay their own way, receiving less financial aid than undergraduates or Ph.D. candidates. “It’s a significant revenue stream, so an unanticipated downturn is always undesirable,” Parker said.

While precise details weren’t expected until later this month, part of the decrease was intentional. After two bumper crops of students, the School of Social Work decided this year to scale back admissions by about 30 students, said Rino Patti, the school’s dean.

“Our figures were artificially inflated over the past two years, so it only looks like we’ve suffered a loss,” he said. “In fact, we’re just holding steady.”

In other instances, however, the losses of master’s candidates were unintentional. The School of Engineering experienced the largest unexpected drop, probably owing to two recent academic trends, Parker said.

“Some Asian countries that used to send their students here are educating their own,” she said. “They’re also being courted by other American universities.”

Another factor is the ongoing slump in Southern California’s aerospace industry.

“A lot of [master’s degree candidates] were new hires at local aerospace companies that were paying for the continuing education,” she said. “There are fewer new hires in aerospace.”

As of the fifth week of classes, the engineering school was still checking its enrollment, so the decline’s extent is not yet clear, according to Joseph Devinny, engineering’s associate dean for academic affairs.

“We’re concerned about it, and we’re doing everything we can to deal with it,” he said. “We’re going to continue to redouble our efforts in recruitment and retention, and we’ve had some success with retention. More students are staying.”u0000

Parker also promised to increase assistance to academic units and graduate admissions in recruiting graduate students of all sorts.

“In the coming year, we’re going to be providing materials that paint the picture of USC as a major top-tier research university. Students want to come to a university that’s highly regarded,” she said.

“We’re also implementing a system that will allow us to notify graduate advisors of students who have made inquiries as a result of recruiting efforts by the Graduate School,” she said. “This will give them more names of interested students to [whom they can] send recruiting material.”

It wasn’t immediately clear why the number of new professional and doctoral students had jumped or where these increases were concentrated, Parker noted.

“If it’s an area where we’re saturated, it’s not helpful,” she said. “But if it’s in an area where we’ve been short, it’s good. We’ll have to look to see what’s going on in each school, but the increase may just be a statistical variation.”

However, enrollment officials downplayed the importance of the drop, pointing out that fully 204 of those students were categorized as “other students,” which includes part-time students taking a single course and employees or their family members taking advantage of tuition remission benefits.

This year’s breakdown has not yet been tabulated. However, tuition remission typically accounts for two-thirds of the “other students” category, which in this case would be 136 students, said Kenneth L. Servis, dean of academic records and registrar.

“Those enrollments are never significant academically or financially for the institution,” he said.