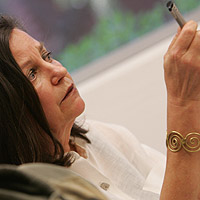 “I write on a visual canvas,” Wiggins said, “seeing a scene in my thoughts before translating it into language.”

It was a morning graced with that October light that loves proximity to water, and the high sky over the Tennessee bounced the river’s shimmer back through every cranny in the city.

Such powerful imagery is one of Wiggins’ signatures. Her protagonist in “Evidence” is fascinated by light – luminescent fireflies, jellyfish and the like – and her prose is chock-full of tantalizing snapshots.

Wiggins, who joined the USC College English department in fall 2005, has joked that she is a visual junkie. Photography is one of her hobbies. Her only child, Lara Porzak, a successful professional photographer in Los Angeles, inherited her visual sensibility.

“I write on a visual canvas,” Wiggins said, “seeing a scene in my thoughts before translating it into language.”

“Evidence,” which won the Commonwealth Club Prize in 2004 and was nominated for both a National Book Award and the Pulitzer Prize, is Wiggins’ seventh novel. She also authored two collections of short stories.

Wiggins shares her multidisciplinary approach to fiction writing with her undergraduate and graduate students. She sometimes takes her creative writing classes to art museums in Los Angeles or to poetry readings for inspiration. Music also inspires her.

“Sometimes I see a certain stroke of the brush on canvas and wonder, ‘How can I express that in words?’ ” Wiggins said.

Her prose is also poetry. Observe this fluid sentence from “Evidence” about a couple in love at the cusp of the Atomic Age:

All along the pirate coast the lighthouse keepers cast their practiced eyes into the night, raking dark infinity with expectant scrutiny the way the lighthouse beams combed cones of light over the tillered sea.

It wasn’t surprising that Wiggins, a lover of luster and light, chose a bench under direct sunlight to be interviewed. On a cloudless day in March at USC, she talked about some of the events in her colorful life.

Born and raised in Lancaster, Pa., to parents of Greek and Scottish ancestry, Wiggins’ father was a farmer who preached in a conservative Christian church founded by her grandfather. She married at 17 and gave birth to Lara. Self-educated, she never attended college.

She raised her daughter in Martha’s Vineyard off the Massachusetts coastline. She lived in London for 16 years and for brief stints in Paris, Brussels and Rome.

While a single writer in London, she recalled the night she cooked a vegetarian Thanksgiving dinner for a group of friends. She wanted her English friends to enjoy an American tradition. Her literary agent brought along one of her male clients – a handsome Indian-born Englishman named Salman Rushdie.

“He was single and charming and gregarious and smart as hell,” recalled Wiggins, sitting on the bench in vibrant emerald satin pants, a rose-colored satin scarf and piercing blue eyes. “And funny. Things moved quickly.”

They fell in love while both were writing novels. Wiggins was writing “John Dollar” (Simon & Schuster, 1989), a story of eight shipwrecked British schoolgirls whose descent into cannibalism becomes a metaphor for Western civilization. Rushdie was finishing “The Satanic Verses,” which chronicled an ancient legend about the Prophet Muhammad, founder of the Islamic religion.

They wed in January 1988. They were preparing a joint book tour in the United States when on Valentine’s Day 1989, they learned the Ayatollah Ruhollah Khomeini had ordered Muslims to kill Rushdie for blasphemy against Islam.

The couple went into hiding under the protection of the British government, moving 56 times in six months from safe house to safe house. Living underground, they were restricted to reading, writing and watching television. The couple decided that Wiggins should emerge from isolation, and she lived in a London flat for a while under an assumed name.

Divorced from Rushdie for 15 years, she has no desire to write a detailed account of her experiences underground. She won’t write specifically about any of her adventures, from chasing tornadoes in Nevada to venturing the Amazon to officiating a wedding in Oaxaca this past spring break.

“I have lived a really interesting life,” she said. “I haven’t lived it so I can excavate material for my writing.”

Besides, she said, “I’m a novelist. I don’t have those muscles. It’s not about me. It’s about what I’ve imagined. It’s the universal voice that I want to move forward. That’s my natural voice.”

She bristled when told she has the kind of sensitivity that produces great writing.

“Writers aren’t the only ones who have that sensitivity,” she said. “Some nurses have it. Bus drivers have it. People with dogs have it. It’s what being human is. I find comfort in that. I don’t promise to give you answers. I write about the human condition.”

Enamored With Luster and Light