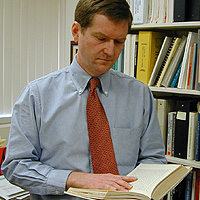 A new study from researchers in the Keck School of Medicine of USC suggests that having a dog in the home may worsen the response to air pollution of a child with asthma.

In “Dog Ownership Enhances Symptomatic Responses to Air Pollution in Children With Asthma,” researchers looked at the relationship between chronic cough, phlegm production or bronchitis and dog and cat ownership among 475 Southern California children with asthma who participated in the Children’s Health Study, a longitudinal study of air pollution and respiratory health.

Children with dogs had significantly increased cough, phlegm production and bronchitis responses to the measured pollutants, including nitrogen dioxide, ozone, particulate matter and acid vapor. There were no increases of these symptoms in children who lived in homes without pets or who lived with only cats.

“Further work is needed to determine what it is about dogs that may increase an asthmatic child’s response to air pollution,” said Rob McConnell, professor of preventive medicine in the Keck School and lead author of the study.

McConnell and colleagues speculated that the increased response to air pollution from a dog in the home may really be due to increased levels of endotoxin, a part of the cell wall of common bacteria, which is more common in homes where there is a dog.

“Cats are highly allergenic, and children with asthma are often allergic to cats,” McConnell said. “Therefore if an allergen were enhancing the lung’s response to air pollution, we’d be more likely to see an association with cats. But in this study we see an effect of air pollution in homes with dogs, so we think endotoxin exposure is a more likely explanation for our results than allergen exposure.”

The authors noted that inhaled endotoxin produces a marked inflammatory response in the lungs, and it may cause the airways of people with asthma to constrict. In previous studies, endotoxin has been shown to enhance the inflammatory effect of diesel exhaust particulate, inhaled highway aerosols and ozone in the lungs of experimental animals.

“There’s experimental literature that shows both allergens and endotoxin interact with air pollution and increase the effect of each other,” McConnell said. “But there’s been very little study to see if these experiments have relevance for the general population of children with asthma.”

McConnell cautioned that much more study is needed to specify why, exactly, children with asthma living in homes with dogs had an enhanced response to air pollution.

“There are other possible explanations for the findings,” he said, “and actual measurements of home allergen and endotoxin, in addition to air pollution, would be important to evaluate further our hypothesis. It could also be that something only indirectly related to dogs could explain these results, for example that kids with dogs exercise outside more so they have more exposure to air pollution.”