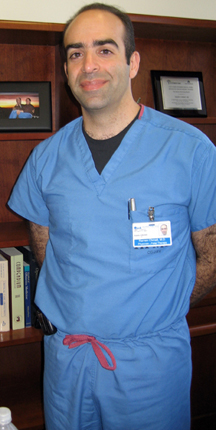 Ramen Chmait’s patients are the tiniest of the tiny—most not even able to live and breathe on their own.

That is because this Keck School of Medicine assistant professor of obstetrics and gynecology specializes in surgeries performed on fetuses in utero: a cutting-edge medical field that is quietly and dramatically changing prenatal care.

In fact, as director of fetal therapy at the USC Institute for Maternal-Fetal Health at Childrens Hospital Los Angeles, that is Chmait’s personal and professional mission: to offer more comprehensive care and a wider range of alternatives for what he calls the littlest patients of all.

“Initially I wanted to go into surgery, but I chose obstetrics and specialized in perinatology because I thought it was a great way to make a difference,” says the southern California native, who attended medical school at UCLA and did his residency at Kaiser Permanente. But the specialty, which he says focuses heavily on prenatal diagnosis, “becomes very frustrating. You can diagnose but, until recently, you couldn’t do anything about the problems you’d find.”

His search for a better alternative led Chmait to a collaboration with Ruben Quintero, one of the pioneers of minimally invasive fetal surgery. During this partnership in Tampa, Florida, Chmait participated in more than 200 surgeries, correcting abnormalities of the fetus and placenta through incisions as small as 3 millimeters.

Last fall, T. Murphy Goodwin, chief of maternal-fetal medicine at the Keck School and David Miller, associate professor of obstetrics and gynecology and medical director of the Institute for Maternal-Fetal Health, began recruiting Chmait to USC. “It has been a long-term goal of ours to expand services at the IMFH into minimally invasive fetal surgery, and we were fortunate to be able to attract one of the most skilled perinatologists in the world,” said Goodwin. “We wanted the IMFH to be capable of providing the full spectrum of cutting edge prenatal diagnostic and therapeutic options through one tightly coordinated team.”

Chmait said he was attracted by the IMFH’s concept of providing total care to the fetus, through childbirth and then into the neonatal period. “It’s a rare perspective on care for the child,” he said. “I think of it as a wagon wheel—each spoke is very important. They had every spoke except fetal therapy and surgery—it was a clear fit.”

Chmait joined USC last January, happy, he says, to bring his family back to the region where he grew up.

By March he had performed his first surgery, an operative fetoscopic laser therapy on a mother 20 weeks pregnant with twins to treat twin-twin transfusion syndrome (TTTS).

This life-threatening condition, in which identical twins share a placenta but do not share the blood supply evenly, comes about when the shared placenta contains abnormal blood vessels that connect the umbilical cords and circulations of the twins. Unequal blood between the twins via the communicating blood vessels leads to TTTS, which usually results in the death of one, if not both, fetuses.

Placing a 3.3 millimeter scope into the uterus through a tiny hole in the skin, Chmait uses laser energy to ablate the connecting blood vessels on the surface of the placenta so that the babies’ blood is no longer shared. Since the March surgery on the twins, he has performed more than twenty fetoscopic operations. Patients have been referred to Chmait from as far away as Hawaii, Oregon, Nevada and Texas.

Among the fetal operative procedures Chmait performs: an “amnio-patch,” which can seal the membranes if a pregnant woman’s water breaks too early, shunt placement for lower urinary tract abnormalities, and transfusions for severe fetal anemia. “The menu is continuously expanding,” he added, noting that soon he will be offering fetal heart surgery as well as treatment of congenital diaphragmatic hernia.

Chmait calls fetal surgery a medical frontier with enormous potential. “The surgery we do now wasn’t even possible a dozen or so years ago,” he noted. “And there’s so much more on the horizon. Imagine how much hope we can give parents today.”

Fetal surgery, he cautioned, is still in its early stages.

He said, “When we look back in 20 years, this will seem like the dark ages. But it is important because we’ve unveiled the black box. Pregnancy was the black box, in that we couldn’t deal with the fetus until the baby was born. Now we have the ability to access the intrauterine environment and deal with congenital defects. Potentially we could use that access to treat genetic syndromes, whether cystic fibrosis or Tay Sachs or anything else,” he said. “The future is wide open.”