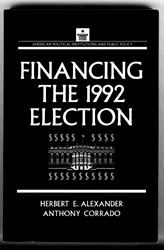 Ross Perot made a lot of noise about bloated presidential campaign budgets during the 1992 election, but Financing the 1992 Election paints a surprisingly parsimonious picture.

Though Perot’s own campaign was the most expensive ever financed by an individual, the tab for all 23 presidential candidates came only to $550 million – surpassing the total for 1988 by little more than 10 percent – according to the new book, which was co-written by USC political science professor Herbert E. Alexander.

“I’m sure these findings will surprise the average voter,” said Alexander, founding director of the USC-based Citizens’ Research Foundation.

“Spending on the 1992 presidential campaign actually fell short of 1988’s record-setting expenditures when adjusted for inflation,” said co-author Anthony Corrado, principal research associate at the CRF and an associate professor of government at Colby College, in Waterville, Me. “However, a record-breaking increase of 52 percent in congressional spending made up for lost ground in total campaign spending.”

Financing the 1992 Election reports that American political candidates raised and spent $3.2 billion for federal, state and local campaigns in the 1991-92 election cycle.

“The $3.2 billion represents an increase of only 19 percent over the CRF’s estimate for the 1987-88 election cycle,” Alexander and Corrado write. “Notably, this increase was close to the 18.6 percent rise in the Consumer Price Index (CPI) during the period from 1988 to 1992, but it was enough to continue stoking the fires of criticism of political campaign costs.”

Television advertising was a big-ticket item for the “big three” presidential candidates in the post-convention period. Clinton picked up the biggest tab (nearly $32.7 million), followed by Perot ($31.9 million) and Bush ($27.7 million).

As in previous elections, PACs were the second-largest source of funding in congressional races, contributing $51.8 million to major-party Senate candidates and $128.3 million to major-party contenders for House seats – for a total of $180.1 million (27.4 percent of total receipts). However, in the presidential race, PACs played a much smaller role than in President Reagan’s 1980 and 1984 campaigns and President Bush’s 1988 campaign. Bush was the only 1992 presidential candidate who had had a PAC, and he closed it down in 1990.

In federal, state and local campaigns, Democrats spent $73.2 million and Republicans spent $80.9 million in soft money, typically to pay for such state-level campaign activities as voter registration and get-out-the-vote campaigns.

The Presidential Election Campaign Fund, designed to promote public funding of presidential campaigns through tax-return checkoffs, continued to lose ground. Receipts have dropped from a high of more than $41 million in 1981 to less than $30 million in 1992.

What kept costs for the 1992 presidential race under such control, compared to 1988?

“[Bush’s] popularity discouraged widespread Democratic politicking,” Alexander said, “and the dramatic events surrounding the August 1990 invasion of Kuwait by Iraq and the subsequent Gulf War produced an abrupt chilling effect on presidential campaigning. By the time Bush’s decline became certain, it was too late for prominent Democrats to gear up a campaign.”u0000