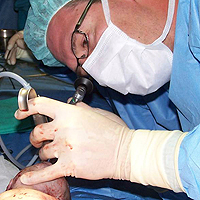 CHLA surgeon Jeff Koempel examines a baby’s airway before repairing a congenital malformation that otherwise would have suffocated the newborn.

A newborn with a potentially fatal birth defect is alive today, thanks to groundbreaking surgery performed at LAC+USC Medical Center by physicians from the Keck School of Medicine of USC and Childrens Hospital Los Angeles.

Using high-resolution 3-D and 4-D ultrasound imaging, doctors at the CHLA-USC Institute for Maternal Fetal Health (IMFH) discovered weeks before the baby was born that it probably would not survive birth because it had an obstructed trachea (commonly known as the windpipe).

“If the baby had been born normally, it couldn’t take a breath, because the whole airway was blocked,” said Istvan Seri, professor of pediatrics, head of the USC division of neonatal medicine and co-director of the IMFH.

A team of 30 doctors and nurses was assembled to perform a rare surgery called the EXIT procedure. EXIT stands for ex-utero intrapartum treatment.

The first portion of the procedure, a modified cesarean operation, was performed by David Miller, maternal-fetal medicine specialist and medical director of the IMFH.

A team of anesthesiologists led by Jeff Lee administered deep general anesthesia, as surgeons opened the uterus with a special stapling device to prevent bleeding and delivered the baby.

However, instead of clamping and cutting the umbilical cord, as in a standard cesarean section, the team allowed the cord to continue delivering oxygen from the placenta to the baby. This gave the doctors extra critical time to assess the newborn and perform the life-saving surgery.

While the baby continued to receive oxygen from the placenta, CHLA pediatric ear, nose and throat surgeon Jeff Koempel performed laryngoscopy to examine the baby’s airway.

Once he determined that the airway was completely blocked due to a malformation of the larynx � known as the voice box � a team of specialists that included Koempel and Henri Ford, professor of surgery, chief of CHLA pediatric surgery and surgical director of the IMFH, performed emergency surgery to open the airway.

Philippe Friedlich, section head, CHLA operations of the USC division of neonatal medicine, and Seri administered medications to the fetus and monitored the heart rate and oxygenation during the surgery.

Once the baby’s airway was opened and secured by a tracheostomy, the umbilical cord was cut and the patient revived. After a short stay at LAC+USC, the baby was transferred to the CHLA Center for Newborn and Infant Critical Care. At press time, the baby was in stable condition, receiving mechanical ventilation.

The EXIT procedure, the first of its kind performed in Southern California, took more than an hour, with the tracheostomy procedure taking about 20 minutes.

The multidisciplinary teamwork it required highlights the nature of the comprehensive management of complex cases provided by the CHLA-USC IMFH, which “provides the full spectrum of cutting-edge prenatal diagnostic and therapeutic options through one tightly coordinated team, a service unique in the Los Angeles area,” said T. Murphy Goodwin, chief of maternal-fetal medicine at the Keck School of Medicine and co-director of the IMFH.

The Institute for Maternal-Fetal Health, based at Childrens Hospital Los Angeles and the adjacent Hollywood Presbyterian Medical Center, is a collaborative program between CHLA and the Keck School of Medicine.