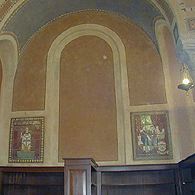 Painting was touched up in the southeast corner of the James Harmon Hoose Library.

From outward appearances, the James Harmon Hoose Library in USC’s Mudd Hall of Philosophy looks just as it has since it opened in 1930.

But behind the familiar vaults, mosaics, timbers and brickwork of this architectural treasure, a recently completed retrofit has rendered the building — housing the university’s oldest continuously operated library — far more resistant to earthquake.

The four-month project that began last May used the skills of more than 100 people, according to Axel Gumeson, director of construction project management in the office of the University Architect.

The building has an unreinforced masonry structural system that would not be used for a similar building being constructed today, he said.

Structural engineers did several studies on the best way to seismically reinforce the building. The option chosen included 14 shotcrete shear walls with strengthened footing and additional steel bracing of the roof system, he said.

If the Hoose had been a generic structure, the work would have been straightforward, according to Gumeson. But the building — designed by Ralph Carlin Flewelling (son of USC philosophy professor Ralph Tyler Flewelling, who built the library’s collection) — is a unique and historic part of the USC campus and Southern California.

“We required that the architect, engineers and contractor follow their suggestions and directions to preserve the historic fabric, look and feel of this grand old building,” Gumeson said.

Gumeson was impressed with the skills shown on the job.

The plaster subcontractor protected, removed, stored and then replaced the historic plaster frescos. The touch-up artist then had the job of repairing and matching the patina of the surrounding decorative painting so that the cut lines necessary for removal and replacement would be virtually invisible.

“Even those of us who know where to look for the cut lines cannot see them,” Gumeson said.

But while the building — which suffered minor damage in the 1994 Northridge temblor — looks the same, the retrofit has “greatly improved [its] ability to withstand and recover from the lateral forces delivered by an earthquake,” he said.

Hoose librarian Ross V. Scimeca was happy about being able to return to his high-ceilinged domain.

Structural work, however, was not limited to the building.

Scimeca said that hundreds of the library’s oldest and most fragile holdings — including its 382-volume, mid-19th century, complete French edition of the writings of the Church Fathers — have been rebound.

The library takes its name from John Harmon Hoose, who joined the USC faculty in 1895 and played a key role in the creation not only of the philosophy but also the sociology, history, economics and psychology programs at the university, receiving an honorary degree in 1913 for his contributions.

Mudd Hall is named after the Seeley Mudd family, who contributed $300,000 to build the structure, which is patterned after an Italian medieval monastery.