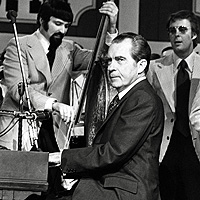 Richard Nixon plays the piano at the dedication of the Grand Ole Opry in 1974.

Photographer David Hume Kennerly has captured some of the most memorable and important images of the past four decades. Now a contributing editor for NBC News and a Getty Images photographer, he has shot for leading news organizations and served as official White House photographer, garnering a Pulitzer Prize and many other accolades along the way.

The USC Annenberg School for Communication, in partnership with the Armory Center for the Arts and with support from Getty Images, presents an exhibition of Kennerly’s photographs from Oct. 3 to May 18, 2007. The exhibit will be in the Annenberg Gallery, on the second floor of the Annenberg School building.

The public and the press are invited to meet Kennerly at the exhibit’s opening reception, to be held Oct. 3 from 5 to 7 p.m.

“Kennerly’s powerful and instructive photographs provide a unique perspective on events and individuals in recent American history,” said Geoffrey Cowan, dean of the USC Annenberg School. “They will provoke thought and discussion, and I am delighted that our school will have the opportunity to share his important work with our students and the public.”

Kennerly has photographed more than 35 covers for Time and Newsweek, covered assignments in more than 130 countries and counts more than one million images in his photographic archive.

At the turn of the millennium, as he approached coverage of his eighth presidential campaign, he tried a new technique. Using one camera and one lens, he created a visual diary with a photo per day during the year 2000. Over the year, he traveled more than 250,000 miles to 38 states and seven countries. The resulting images were presented in his fourth book, “Photo du Jour: A Picture-a-Day Journey Through the First Year of the New Millennium.”

The project, which Kennerly describes as the most satisfying of his career, includes many historic political moments and encompasses the periphery of politics � “the texture of life that surrounds it,” according to Kennerly. “I had finally melded my job as a political reporter with the photographic equivalent of stopping to smell the roses.”

The USC exhibition � the first in California to feature images from “Photo du Jour” � also contains classic Kennerly photographs, including his work covering the Vietnam War and major political leaders over the past four decades.

“Photojournalism is part science, part art and part magic,” said Rick Meyer, head of USC Annenberg’s photojournalism program. “David Hume Kennerly is a photojournalist who uses those three things to produce dramatic and important images year in and year out. His photos also inform, delight and document. He will inspire Annenberg students with his photographs.”

Don E. Carleton, director of the Center for American History at the University of Texas at Austin, which houses Kennerly’s archive, said, “David Kennerly has spent his whole career documenting the world around him, especially the political and civic world. He has captured the evidence of history as it unfolds. It’s important for future generations to be able to access the times he has been documenting. He is certainly among the most outstanding practitioners of photojournalism craft working today. He ranks in a class of his own.”

In 1972, Kennerly won the Pulitzer Prize for feature photography for his “dramatic photographs of the Vietnam War.” After the war, Kennerly returned to the United States for Time and began to cover the domestic political battles raging in Washington.

When President Nixon resigned, Kennerly was on the South Lawn of the White House as the soon-to-be-ex-president departed. His historic photo of Nixon’s wave goodbye � taken when Kennerly was just 27 years old � is one of the dozens of his images that have helped define American photojournalism.

Nixon’s successor, Gerald Ford, asked Kennerly to serve as White House photographer. When the Ford presidency ended, Time called Kennerly back to action, sending him to photograph Fidel Castro in Cuba, President Anwar Sadat in Egypt and the horrors of Jonestown in Guyana, among other assignments. He went on to shoot major projects for Newsweek, LIFE, Vanity Fair, George and many other publications. He is now a contributing editor for NBC News and shoots for Getty Images.

Howard Fineman, chief political correspondent for Newsweek, once said of Kennerly: “[He] modestly refers to himself as a ‘political photographer.’… It’s like calling Matthew Brady a ‘war photographer’ or Thomas Eakins a ‘Philadelphia portrait painter.’ Kennerly is as good as it gets in a craft he defined.”

Kennerly has won numerous awards in addition to the Pulitzer. A selection of “Photo du Jour” images received five prizes in the 2001 White House Press Photographer’s contest, including a first prize for best 2000 campaign coverage. Kennerly was included in Washingtonian’s end-of-the-century list of the top 50 journalists (the only photographer on the list) and was named one of American Photo’s Top 100 most important people in American photography. His work has been exhibited at the Smithsonian Institution and the New York Historical Society.

The author of five books, he is working on the upcoming “Extraordinary Circumstances, the Presidency of Gerald Ford and Big Shots,” featuring 40 years of his portraits from Miles Davis and Ansel Adams to seven U.S. presidents.

Regular viewing hours for the exhibit are Monday through Friday, 10 a.m. to 5 p.m. The exhibition is free and open to the public. Images are on loan from the Center for American History at the University of Texas at Austin and Rebecca and David Kennerly. The exhibition is sponsored by Getty Images.

The David Hume Kennerly exhibition is curated by Jay Belloli, director of gallery programs at the Armory Center for the Arts. USC Annenberg will present several related events during the course of the exhibition.

Portrait of a Photographer