The human brain holds many clues about a person’s long-term health — in fact, research shows that a person’s brain age is a more useful and accurate predictor of health risks and future disease than their birthdate. A new artificial intelligence model that analyzes MRI brain scans developed by USC researchers could be used to accurately capture cognitive decline linked to neurodegenerative diseases like Alzheimer’s much earlier than previous methods.

Brain aging is considered a reliable biomarker for neurodegenerative disease risk. Such risk increases when a person’s brain exhibits features that appear “older” than expected for someone of that person’s age. By tapping into the deep learning capability of the team’s novel AI model to analyze the scans, the researchers can detect subtle brain anatomy markers that are otherwise very difficult to detect and that correlate with cognitive decline. Their findings, recently published in the journal Proceedings of the National Academy of Sciences, offer an unprecedented glimpse into human cognition.

“Our study harnesses the power of deep learning to identify areas of the brain that are aging in ways that reflect a cognitive decline that may lead to Alzheimer’s,” said Andrei Irimia, assistant professor of gerontology, biomedical engineering and neuroscience at the USC Leonard Davis School of Gerontology and corresponding author of the study.

People age at different rates, and so do tissue types in the body. We know this colloquially when we say, ‘So-and-so is 40, but looks 30.’

Researchers collated the brain MRIs of 4,681 cognitively normal participants, some of whom went on to develop cognitive decline or Alzheimer’s disease later in life.

The researchers utilized a neural network developed by Paul Bogdan, associate professor of electrical and computer engineering at the USC Viterbi School of Engineering, and members of his Cyber Physical Systems lab group. This neural network — an AI model that ‘learns’ through intensive, complex data analysis — allowed the research team to predict participants’ ages from their brain MRIs: First, the researchers trained the network to produce detailed anatomic brain maps that reveal subject-specific patterns of aging. They then compared the perceived (biological) brain ages with the actual (chronological) ages of study participants. The greater the difference between the two, the worse the participants’ cognitive scores, which reflect Alzheimer’s risk.

The results show that the team’s model can predict the true (chronological) ages of cognitively normal participants with an average absolute error of 2.3 years, which is about one year more accurate than an existing, award-winning model for brain age estimation that used a different neural network architecture. 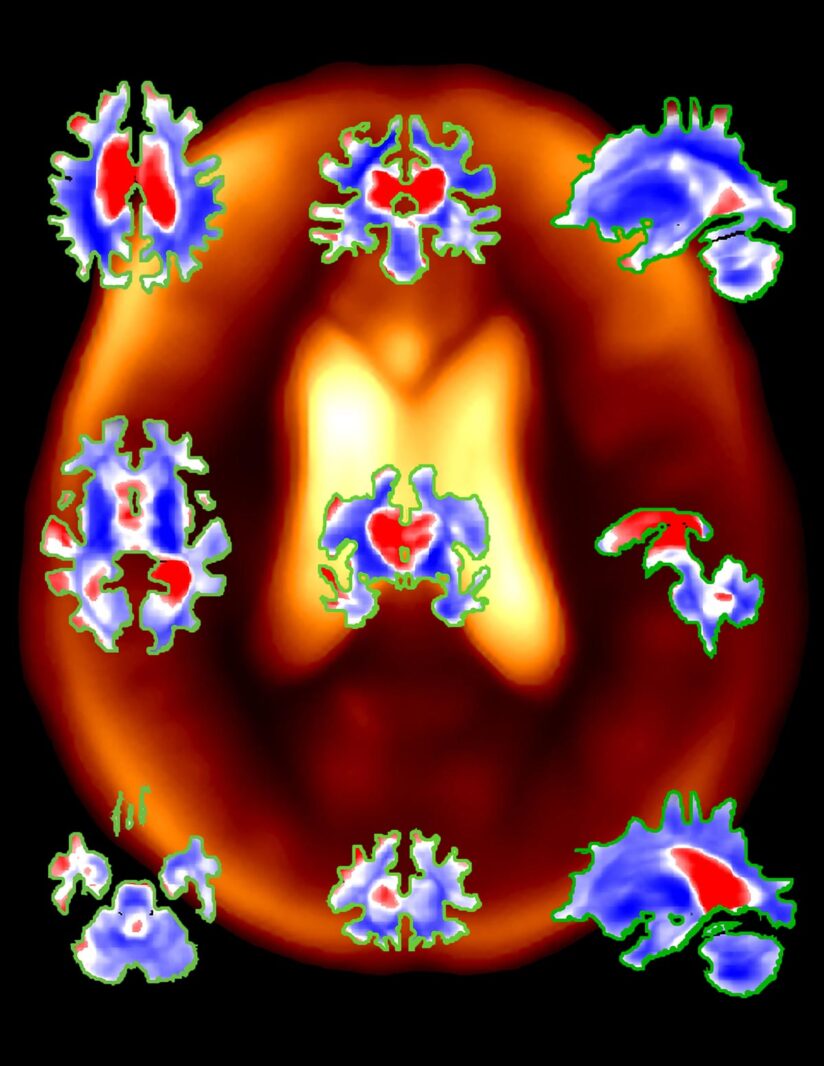 Researchers collated the brain MRIs of 4,681 cognitively normal participants, some of whom went on to develop cognitive decline or Alzheimer’s disease later in life. (Illustration/Courtesy of the USC Leonard Davis School of Gerontology)

“Interpretable AI can become a powerful tool for assessing the risk for Alzheimer’s and other neurocognitive diseases,” said Irimia, who also holds faculty positions with USC Viterbi and the USC Dornsife College of Letters, Arts and Sciences.

“The earlier we can identify people at high risk for Alzheimer’s disease, the earlier clinicians can intervene with treatment options, monitoring and disease management.”

Brain aging: differences according to sex

The new model also reveals sex-specific differences in how aging varies across brain regions. Certain parts of the brain age faster in males than in females, and vice versa.

Males, who are at higher risk of motor impairment due to Parkinson’s disease, experience faster aging in the brain’s motor cortex, an area responsible for motor function. Findings also show that, among females, typical aging may be relatively slower in the right hemisphere of the brain.

An emerging field of study shows promise for personalized medicine

Applications of this work extend far beyond disease risk assessment. Irimia envisions a world in which the novel deep learning methods developed as part of the study are used to help people understand how fast they are aging in general.

“One of the most important applications of our work is its potential to pave the way for tailored interventions that address the unique aging patterns of every individual,” Irimia said.

“Many people would be interested in knowing their true rate of aging. The information could give us hints about different lifestyle changes or interventions that a person could adopt to improve their overall health and well-being. Our methods could be used to design patient-centered treatment plans and personalized maps of brain aging that may be of interest to people with different health needs and goals.”

What older adults do while they sit affects dementia risk, study indicates

Researchers at USC explored the link between sedentary behavior and risk of dementia, find that type of activity matters when it comes to brain aging.

The buildup of a protein called amyloid beta in the brain, often thought to be connected to Alzheimer’s, may instead be a general change that occurs with age even in healthy brains, USC’s Caleb Finch says.

How old is your brain, really? Artificial intelligence knows