On a cold winter morning (at least by Southern California standards), USC’s newest students received their official warm welcome into the Trojan Family on Friday with words of encouragement and a reminder to take chances that lead them outside their comfort zone.

Each year, several hundred Trojans — this year, they represent approximately one-fifth of the 2022-23 freshman class, along with more than 1,200 graduate and professional students — start in January. Friday’s convocation officially launched their USC academic journey.

This was the first time the event has been held in the Galen Center. While the larger fall new student convocation in Alumni Park looks a lot like USC’s May commencement ceremony, the spring convocation has traditionally been a more intimate event in Bovard Auditorium.

NEW TROJANS BY THE NUMBERS

Some details about the students who will start USC classes in January 2023:

This time, though, the stage was set in the university sports arena, filled with family, friends and new Trojans sporting academic gowns.

Folt highlighted the incredible diversity of the new Trojans, who include transfer students, almost 100 veterans and students from 40 countries. 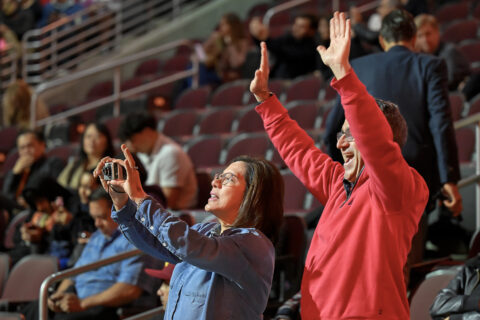 She also welcomed the friends, families and mentors of the new students as well: “You, too, are now members of the Trojan Family.”

Folt shared her own academic journey, from dropping out of The Ohio State University and waiting tables while taking community college classes in Santa Barbara, to earning her bachelor’s degree, master’s degree and doctorate in the University of California system. Not every step along the way was successful, she said, “but I wouldn’t change a thing.”

She shared three pieces of advice for the newest Trojans:

“USC is really filled with extraordinary people with varied backgrounds and so many different experiences,” she said: Hone your skills, try new things and take intellectual challenges.

“You’re going to find your own big moment,” she said.

Student government leaders echoed Folt’s sentiment that each student make time for themselves. Undergraduate Student Government President Hannah Woodworth — now a senior — noted that, when students returned to campus after the COVID pandemic had forced classes to be held remotely, “it was important for me to find a balance between the ‘hamster wheel’ and nothing.” Graduate Student Government President Sam Garza agreed, telling the new Trojans that “this journey will take everything you’re willing to give it,” but adding, “It’s important to recognize that taking time for ourselves is not a luxury but a necessity.” 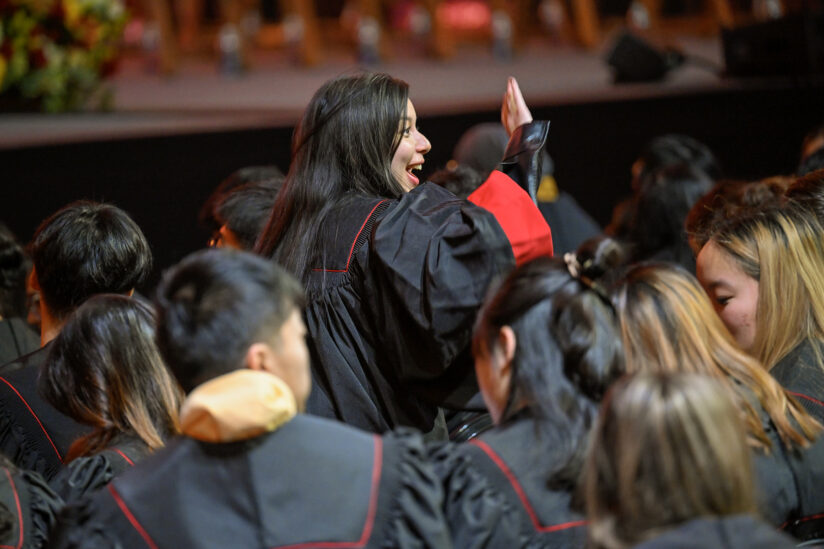 The newest Trojans — in their academic robes — wave to the crowd. (USC Photo/Gus Ruelas)

Entrepreneur Zachary Coughlin, a 2021 graduate, advised the students not to fear the “rabbit holes” they might find themselves in, because one never knows where they might lead. “They paved the way for the path I was meant to take,” he said.

Assistant Professor Michael Paranal, himself a USC graduate and now an accounting instructor at the USC Marshall School of Business, shared a recent experience he had while working on a project with SpaceX. Paranal, an accounting and law expert suddenly surrounded by engineers, began to doubt himself. But he overcame it: “I didn’t quit. You know why? Because I am a Trojan.”

In the academic welcome, Andrew McConnell Stott — dean of the USC Graduate School and USC’s vice provost for academic programs — noted that “your education does not begin with an acceptance letter, nor does it end with a diploma.”

He said the students may experience “imposter syndrome,” but reminded them that “you are not an imposter.” The new students may feel uncomfortable at times, Stott said, but as faculty, “We wouldn’t be doing our jobs if we didn’t challenge you.”

Most of the new students were unaware that upon entering the lobby of the Galen Center, they would immediately be directed to find an academic black robe in their size to wear during the event. The robes have traditionally been part of the fall convocation but not in the spring event until this year.

Freshmen Ryan Long and Sammy Fromberg stood with a group of new friends as they put on their gowns, and Long joked: “I feel like Emperor Palpatine [from the Star Wars films].”

Wearing the robe had completely enriched the experience for freshman Riya Duddalwar, who is majoring in computer science and business administration. 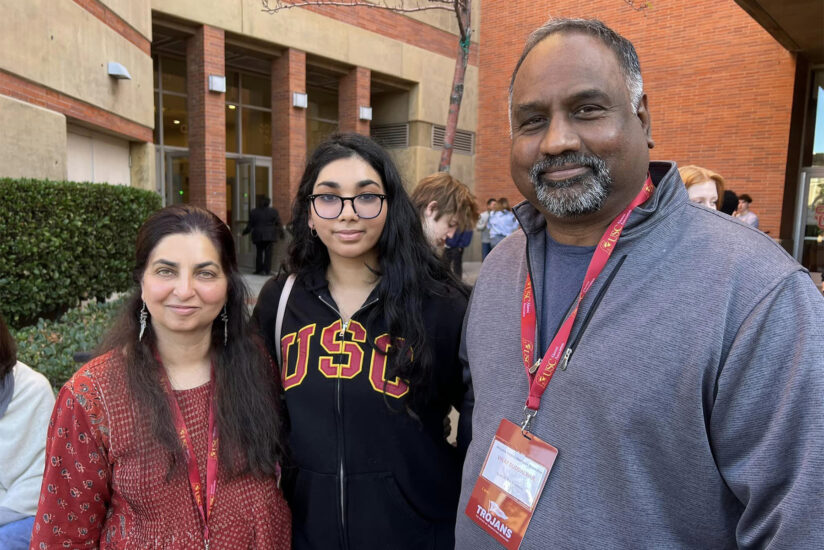 Freshman Riya Duddalwar is flanked by her parents, Geeta Iyengar (left) and Vinay A. Duddalwar, outside Galen Center. (Photo/Greg Hernandez)

“I didn’t think it was going to be this formal, but the ceremony helped to create this sense of community — especially with all of us wearing the same garments,” she said as she stood with her parents after the event. “Yesterday, I was feeling a little bit of imposter syndrome like I was behind and maybe don’t fit in here, but I just feel more part of the Trojan Family now.”

Dominic Elrington, an incoming sophomore who completed his freshman year at El Camino College, also walked out of the Galen Center feeling like a Trojan at last.

“It’s a send-off from my life at home, and it’s a really good welcome,” the business administration major said. “It made me feel really official. As a transfer student, you feel like you might not belong here, but we got all the same experiences that all new students get and I loved it. I was surprised that we got to wear the gowns, and it was cool.”

Outside the Galen Center, selfies and hugs

The scenes after the event resembled graduation day, with students taking selfies with each other and proud parents hugging their children as they embark on a new chapter.

As Tobey Groome, a freshman majoring in journalism, greeted his parents outside of the Galen Center, they were beaming with pride and excitement and pleased with the helpful messages imparted during the program.

I loved the enthusiasm … It makes me want to go back to college.

“I loved the enthusiasm and how the speakers emphasized being sure to take time for yourself and to take those moments and enjoy them as part of your journey,” said Groome’s mother, Vala Runolfsson. “It makes me want to go back to college.”

Groome said he found it hard to believe that he had arrived on campus less than 24 hours earlier and that it was already feeling like home.

“I’ve met so many people here already,” he said. “It was cool to hear from past students today and from some of the faculty we’re going to be working with. I’m super excited about being here.”

It may be a good choice for those who are set on USC and like to get a jump on things. For others, the standard process remains the way to go.

New Trojan ready to get the most of his USC experience

Oliver Laryea — one of more than 2,000 students who start at USC this month — is ready to take advantage of everything the university has to offer, from academics to connections only the Trojan Family can provide.

Newest Trojans get official welcome as they start their USC journey