A USC study of Instagram shows that a picture and a video are worth more than just a thousand words. They can fuel a human rights movement.

The study, published Wednesday in the journal PLOS ONE, demonstrates how images and videos on social media amplify conversations around civil rights and shape large-scale movements like the Black Lives Matter marches and demonstrations that occurred after police killed George Floyd in Minneapolis on May 25, 2020.

The research involved collaborators from the USC Annenberg School for Communication and Journalism and the Information Sciences Institute at the USC Viterbi School of Engineering.

“So much political communication research prior to this study focused on Twitter as a driving force for digital activism. When #BlackoutTuesday began trending on Instagram on June 2, 2020, however, our team realized that we may be witnessing a visual paradigm shift,” said Allissa Richardson, associate professor of journalism and author of Bearing Witness While Black: African Americans, Smartphones, and the New Protest #Journalism.

In a computer analysis, researchers found that more than 1.1 million posts and 1.6 million photos on Instagram after the police killing mentioned #JusticeForGeorgeFloyd. The study of Instagram posts from May 28 through June 30, 2020, showed that the platform, designed to amplify popular posts, elevated the voices of independent journalists, celebrities, advocates and activists who were outraged by the killing recorded by a citizen witness, Darnella Frazier.

“We had seen in prior social movements, like Occupy Wall Street a decade ago, that social media can help with the framing of the core narratives of protest, and help coordinate collective action,” said Emilio Ferrara, USC professor of communication, computer science and preventative medicine. “But #JusticeForGeorgeFloyd brought the discussion even further to mainstream media attention.”

The truth reframed amid #JusticeForGeorgeFloyd

The research team noted that the posts effectively reframed the situation as a social justice matter instead of as a criminal one. 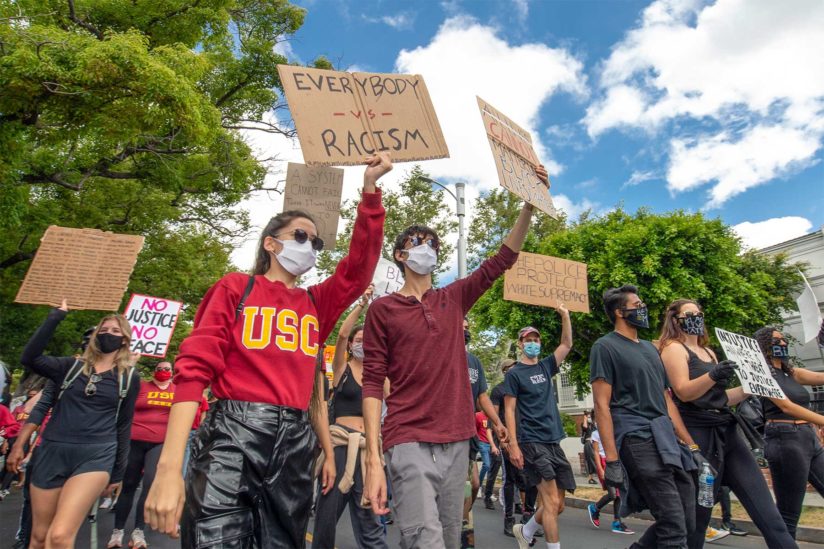 Additional hashtags appeared and protests occurred throughout those weeks of June 2020, including the musician-led protest #BlackOutTuesday, as well as a second wave of #BlackLivesMatter protests. The first wave had taken place six years before Floyd’s death. Demonstrators then were demanding justice for Michael Brown, who was shot and killed by a police officer in Ferguson, Mo.

This is believed to be one of the first studies to quantify Instagram posts in relation to the second wave of #BlackLivesMatter movements across the country.

“Amid the 2020 COVID-19 lockdowns, people wanted to see and share compelling images of solidarity, more than they ever had before,” Richardson said. “They wanted to be connected visually to each other in ways that Twitter did not seem to allow. When it came to the tragic nature of Mr. Floyd’s death, tweets seemed inadequate — they wanted to host live discussions, create pictorial carousels of information and broadcast their protests.”

The researchers found that Instagram, as a visual content platform, was particularly effective in mobilizing coalitions around racial justice by allowing new opinion leaders to enter public discourse.

Independent journalists, activists, entertainers, meme groups and fashion magazines were among the many opinion leaders that emerged throughout the protests through visual communications that went viral. This contrasts with text-based platforms like Twitter that allow voices with institutional power (such as politicians, traditional news media or police departments) to control the flow of information.

The composition of the opinion leaders during the movement on Instagram is distinct from that on Twitter.

“The composition of the opinion leaders during the movement on Instagram is distinct from that on Twitter,” said Ho-Chun Herbert Chang, a USC ISI doctoral student and corresponding author on the study.

“What was surprising was the diversity of content consumption by individual users who commented and responded to sources one would assume to have different audiences.”

The researchers explained that the new wave of opinion leaders helped reframe narratives by posting visuals that portrayed protests as memorials instead of riots and protestors as poignant rather than deviant.

“This suggests that visual-based social media can potentially serve as platforms for grassroots social movements and political organizing, similar to the early days of Twitter. We are seeing how social media can merge audience streams, likely through its feed algorithms,” Chang said.

“This study suggests there is something beautiful in human nature’s ability to come together, mourn and coalesce around shared ideals, and social media can help bring that out,” Ferrara added.