Editor’s note: Title IX — the landmark legislation that prohibits sex discrimination in educational institutions that receive federal funding — was signed into law on June 23, 1972. In recognition of this anniversary, we’ll be profiling Trojan Title IX trailblazers throughout the academic year.

When Jean Chen Shih interviewed for a faculty position at the USC Alfred E. Mann School of Pharmacy and Pharmaceutical Sciences in 1974, she was told there were 70 other applicants for the job and left campus feeling unsure about her chances. Shih was nearly nine months pregnant, but no one seemed to notice after two days of interviews and a seminar presentation.

Just days after giving birth to her second son, Shih received a call from a man congratulating her. She replied, “Thank you! It’s a boy!” After some confusion, Shih was surprised to discover she was not speaking with a family well-wisher but with the head of the USC search committee who was calling with an offer to join the faculty.

“He said, ‘I didn’t know you were about to deliver a baby,’” she recalled. “I didn’t know if it was an important issue and didn’t know what they thought about it.”

Shih didn’t ask; she just got to work. During her nearly five-decade career at USC, she has done groundbreaking scientific research and become a world leader in understanding the neurobiological and biochemical mechanisms behind such behaviors as aggression and anxiety. She is also developing cancer drugs with dual therapy and diagnosis functions.

She is a University Professor and holds the endowed Boyd P. and Elsie D. Welin Professor of Pharmaceutical Sciences chair. Her areas of expertise include brain development, autism spectrum disorder and repurposing antidepressants for brain cancer and prostate cancer.

Shih’s many honors and accomplishments include two prestigious MERIT (Method to Extend Research in Time) Awards from the National Institutes of Health. Fewer than 1% of researchers who apply for federal funding are chosen to receive a MERIT Award, which provides five years of grant support with the option of an additional five years. She is the only faculty member to hold this honor in USC history. She is also the founding director of USC-Taiwan Center for Translational Research and past president of the Society of Chinese Bioscientists in America, a leader in global interdisciplinary and translational research.

Title IX had been signed into law just two years before Shih’s hiring at USC. The landmark law prohibits sex-based discrimination in any school or other educational program receiving funding from the federal government. 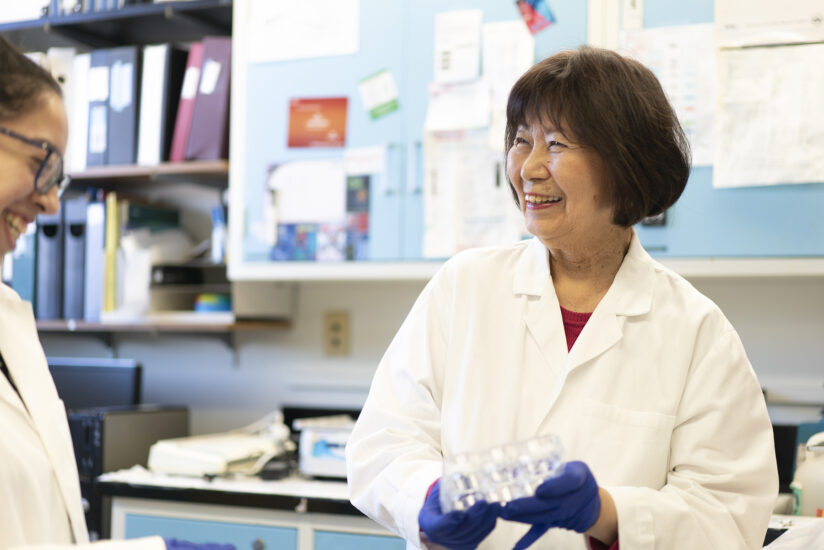 Jean Chen Shih has been with USC’s pharmacy school for 48 years. (Photo/Courtesy of the USC Alfred E. Mann School of Pharmacy and Pharmaceutical Sciences)

“Most women like me didn’t know what our rights were,” Shih said of her early days at USC. “When anything would happen to us that wasn’t fair, we just thought, ‘That’s the way it is.’”

The discrimination wasn’t obvious, but it was there.

“In 1974, there were fewer female faculty members, and our slogan was always, ‘A woman has to work twice as hard to get credit,’” Shih said.

Title IX also couldn’t make it easier for Shih to juggle her responsibilities at work and at home.

“Sometimes a faculty meeting would go past 5 p.m., and I’d have to pick up my son from school,” she said. “But at that time, I was afraid to say, ‘I cannot stay.’ I would get to the school and there would be my son standing at the football field by himself waiting for his mother to pick him up. I’d feel terrible.”

She pointed out that faculty meetings began to finish much earlier once male faculty members became involved in picking up their kids as well.

Although Shih has seen changes and improvements, she believes Title IX is as important now as it was 50 years ago.

“Now we have more female students, and I think this law has really helped people at all levels to see the importance of equal rights — especially in education,” Shih said. “It’s very important that more and more people are aware of this law. Then, I think the improvement will be expanded exponentially.”

A mother’s example to a Title IX trailblazer

Born in China, Shih moved with her family to Taiwan when she was 8 years old. She lived there until after graduating as valedictorian with a bachelor’s degree in biochemistry from National Taiwan University.

Shih said “education was always everything” because of the influence of her “trailblazer” mother.

“I was brought up to always do my best in everything I do and always try to help others,” Shih said. “I’ve known many Nobel Prize winners, but she is the person I admire the most.”

It never occurred to Shih, the second of three daughters, that she wasn’t as smart as the men in her classes. She had the confidence and the drive to leave Taiwan and earn a doctorate in biochemistry from a joint program at the University of California, Riverside, and UCLA.

My mother never even for one day let us think that females are different.

“My mother never even for one day let us think that females are different,” she said. “She believed education would bring us to a higher level to help more people.”

Her mother not only stressed academics, but also being a good person. She led by example: “When I was little and wanted to buy shoes, she would also buy shoes for the neighbor who was poorer than us.”

Shih believes she has continued her mother’s legacy of education and helping others through her teaching.

“I have been here 48 years, and my female students always write to me saying I serve as a role model for them and how much they appreciate me,” she said. “Some of their daughters have graduated from college now. I feel good that I have been able to pass along that important, good message.”

The substantial gift from innovator and physicist Alfred E. Mann will expand USC’s activities at the intersection of health sciences and engineering.