A 10 a.m. time slot for a theatrical production is not usually an actor’s dream. But ask any cast member of this month’s USC School of Dramatic Arts stage production of Into the Woods, and they’ll tell you that this particular matinee performance was special.

The cast performed for 350 middle and high school students from East and South Los Angeles at USC’s Bing Theatre, hoping to inspire the next generation of artists.

“I knew when stepping out on that stage that I was showing these little babies what was possible for them to achieve, that there is space for them in the spotlight and that they deserve to take up space and be celebrated,” said Talha Barberousse, a senior earning her BFA in musical theater.

The School of Dramatic Arts invited five local schools to attend the performance. The event was the culmination of a partnership between the school and the USC Office of Community and Local Government Partnerships, with the Ella Fitzgerald Charitable Foundation helping to provide transportation for the students. According to Sergio Ramirez, associate dean of admissions and student services at the School of Dramatic Arts, this event was years in the making.

“This was really just a way of bringing different audiences into our space to see our shows,” Ramirez said. “We wanted to make theater more accessible to students.” 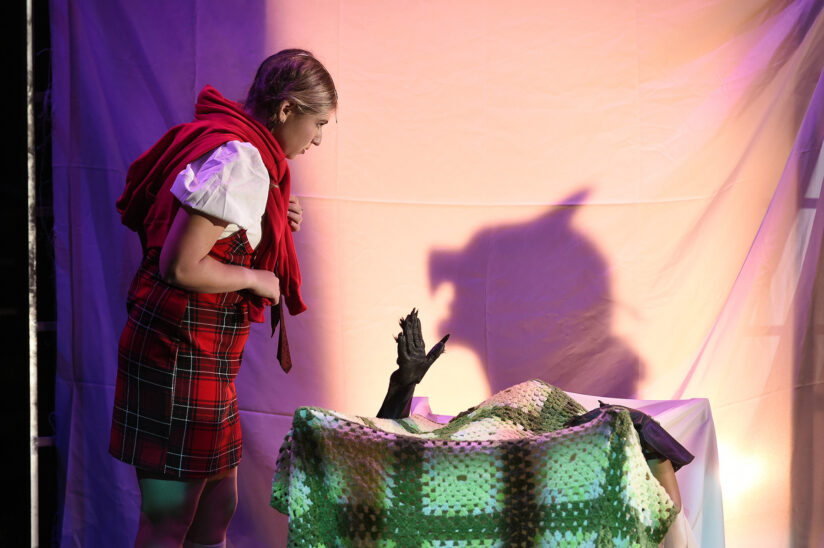 Into the Woods intertwines the stories of several main characters, including Little Red Ridinghood, Jack (of beanstalk fame) and Cinderella. (Photo/Craig Schwartz)

As part of the school’s fall season, Into the Woods ran from Oct. 27 to Nov. 3.  The musical featured a cast of 24 students, with dozens more stage managing and designing the costumes, sets, sound and lighting for production.

Originally written for the stage by legendary composer and playwright Stephen Sondheim and James Lapine, Into the Woods is a fantasy musical that intertwines the stories of several main characters: Cinderella, who wishes to attend the king’s festival; Jack, who wishes his cow would produce milk; Little Red Ridinghood, who wishes to bring bread to her grandmother; and a baker and his wife, who wish to have a child. A witch curses the baker and his family due to the actions of his father. The witch — played by Barberousse — tasks the baker with collecting several items to reverse the curse, sending him down a path that crosses with the other main characters.

“The witch is portrayed as an extremely beautiful, extremely powerful, dynamic woman, and that is such a refreshing image for how Black women are portrayed in the media,” Barberousse said. 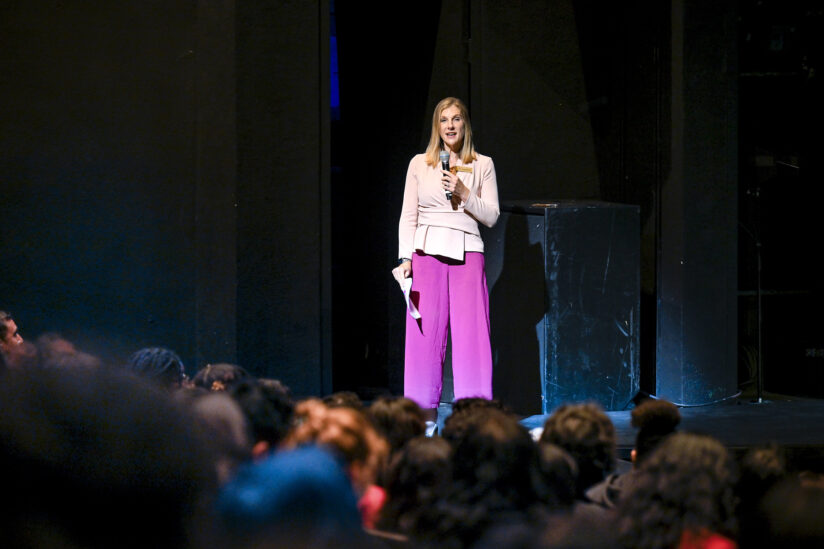 The play was adapted into a film in 2014 that featured Hollywood heavy hitters like Meryl Streep, Johnny Depp, Chris Pine, Emily Blunt, Anna Kendrick and James Corden, as well as a budget of $50 million. USC’s production budget wasn’t quite that high, but that doesn’t mean the performances and sets were unimpressive.

Into the Woods design team’s work helps tell the stories

The design team created several sets and backgrounds so that the audience could keep track of the separate storylines that intertwine at various points. The front stoop of Cinderella’s house — which also doubled as the palace — along with the front of the baker’s shop and Jack’s farm were all drawn and painted at large scale and lowered from the rafters to signal where the current scene was taking place. For scenes in the woods, those three sets were raised up, revealing a large tree and painted scaffolding that served as towers, beanstalks and other parts of the forest.

For a scene featuring a giant, LED lights were used to create a mouth and eyes in the upper corner of the theater, with one of the actors using a voice modifier to create a deeper tone that provoked an energetic response from the young audience.

That audience engagement is what senior Armand Akbari said made this performance particularly special.

“Seeing how reactive and fascinated they are by the spectacle of live theater reminded me not only of my inner child who first fell so deeply in love with performing, but also how fortunate I am to be where I am, studying what I do,” said Akbari, who played both Rapunzel’s prince and Cinderella’s father.

Actors meet audience members after Into the Woods performance 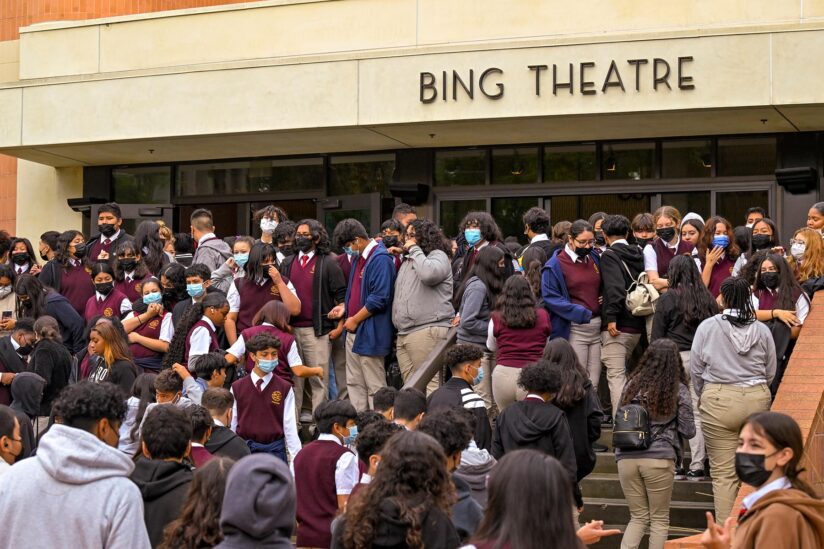 The biggest thrill of the day for both Barberousse and Akbari — who is also earning his BFA in musical theater — came after the show, when the cast was able to interact with students outside of the theater.

“I was speaking with some SDA faculty, and some students nearby crowded together and were like, ‘Oh my gosh — is that the prince?’” Akbari said. “It’s so thrilling to see raw and unfiltered reactions and such directness and fascination coming from the area students.”

For Barberousse, the opportunity to interact with students and serve as a role model for those looking to pursue a career in theater made all the work worth it.

“I hope the school continues outreach like this in the future because theater really isn’t accessible for many BIPOC,” Barberousse said. “Seeing yourself represented in excellence is necessary to envision yourself that way.”

Thiloshon Nagarajah has developed a device that stops plastic debris from flowing through neighborhood drainage systems and polluting the oceans.