USC and the Alfred E. Mann Foundation for Biomedical Engineering have launched a major initiative to reimagine biomedical engineering and pharmaceutical sciences for the 21st century. A gift from inventor and physicist Alfred E. Mann has grown to more than $230 million that will be used to support the expansion of USC’s academic and research activities at the intersection of health sciences and engineering.

To acknowledge this new focus and related investments, two USC entities will be renamed: USC Alfred E. Mann School of Pharmacy and Pharmaceutical Sciences and the Alfred E. Mann Department of Biomedical Engineering within the USC Viterbi School of Engineering.

The USC Mann School of Pharmacy and Pharmaceutical Sciences will receive a $50 million endowment for student scholarships, faculty recruitment and integrating a universitywide research infrastructure related to biomedical innovation across USC’s University Park and Health Sciences campuses. It is the largest naming donation for a school of pharmacy in California.

The Mann Department of Biomedical Engineering will receive $35 million to expand medical engineering research, attract top faculty members and strengthen its ties with the Keck School of Medicine of USC. This is one of the largest naming gifts to a biomedical engineering department in the nation.

Additional funds will go toward interdisciplinary endowed chairs across multiple schools to support life-improving and life-saving research, innovation and student learning and the continued support of the Alfred E. Mann Institute for Biomedical Engineering at USC.

This sweeping initiative reflects Alfred Mann’s pioneering vision and has the power to expand human understanding in pharmaceutical sciences and biomedical engineering.

This initiative builds on Mann’s prescient work to develop and commercialize innovative solutions for the unmet medical needs of today and tomorrow.

“Al was a firm believer and dedicated his life’s work to the proposition that pharmacological science as well as biomedical engineering would both improve and extend the lives of millions if not billions of those afflicted,” three trustees of Alfred E. Mann’s charities and of the Alfred E. Mann Foundation for Biomedical Engineering — Michael Dreyer, Anoosheh Bostani and Claude Mann — said in a joint statement. “We wholeheartedly believe that associating Al’s name with the School of Pharmacy and the Department of Biomedical Engineering is a great way for his legacy to be remembered, as these were the fields he was most passionate about.”

With more than half of all pharmacists in Southern California trained at USC, the School of Pharmacy is moving beyond the traditional role of the field to position pharmacists as first-line medical staff and health care providers.

The endowment further enables the School of Pharmacy to continue its centurylong tradition of innovative programming, research, practice and collaboration. One of the first schools of pharmacy in the country at its founding in 1905, the school established itself as a trailblazer in changing the education, requirements and professional career path of pharmacy early on by training professionals across the continuum of pharmaceutical sciences, from clinical care to economics.

With 117 years under its belt, the school is one of the top pharmacy schools nationwide and the highest-ranked private pharmacy school. USC was the first school in the nation to offer a Doctor of Pharmacy degree, as well as a clinical pharmacy program, clinical clerkships, doctorates in pharmaceutical economics and regulatory science, and a PharmD/MBA dual-degree program, among other innovations in education, research and practice.

“Our fields are ever-evolving, and as health care needs change, this $50 million endowment will give us the flexibility and wherewithal to quickly pursue bold ideas and innovations that anticipate and are ahead of the curve in meeting those changes,” said Vassilios Papadopoulos, dean of the USC Mann School of Pharmacy and Pharmaceutical Sciences. “We will have the agility, coupled with the know-how and determination, to address new opportunities and challenges as they arise, recruit and retain top interdisciplinary faculty, and increase the aid we are able to offer to attract the best and brightest students from across the country and around the world.

“The naming really makes perfect sense, because Alfred E. Mann was also a person who believed in the business of pharmacy,” Papadopoulos said. “It is not only knowledge; health care also has a business and economics aspect. When I was told about the interest, I thought this would definitely be fitting for everything the School of Pharmacy does, from discovery to application.”

Throughout his long and distinguished career, Mann founded companies and funded the creation of products that revolutionized the health care field. He also donated more than $174 million to USC toward advancements for human health, including the establishment of AMI-USC, which has been instrumental in creating groundbreaking medical inventions such as the artificial retina. Mann, who died in 2016, was a member of the university’s Board of Trustees and also served on the Board of Overseers of Keck School of Medicine of USC.

Students and faculty from the School of Pharmacy drew national attention  during the pandemic for their work vaccinating hundreds of thousands of community members. The pandemic revealed how essential pharmacists are within a traditional health care team. 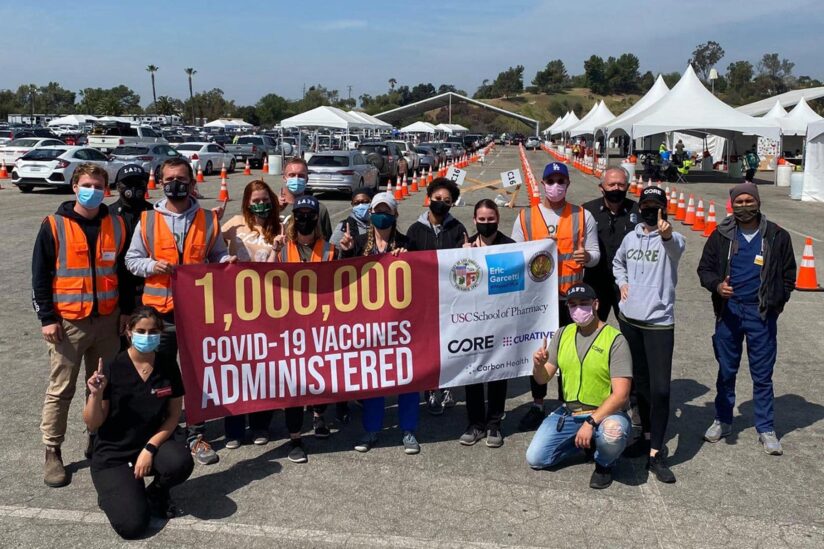 “This is one of the few positive things of the pandemic,” Papadopoulos said. “This is where people realized that primary care can be done by pharmacists and that the pharmacy really is the place where people connect with their health care provider.”

Richard Dang, assistant professor of clinical pharmacy and residency program director at the School of Pharmacy, agrees: “Many members of government and the community recognized that pharmacists can play a major role in the delivery of health care, and it’s beyond the traditional image of simply providing a medication. It’s also opened the eyes of our own students and staff to the magnitude of impact that they can have as a pharmacist.”

When multiple COVID-19 vaccines gained FDA approval near the end of 2020, the School of Pharmacy sprang into action, partnering with key Los Angeles entities, including the mayor’s office, L.A. Fire Department and the nonprofit Community Organized Relief Effort, to ensure that vaccines were available where Angelenos work, live and play.

This swift action is part of the inspiration for the school’s new naming gift. The permanent endowment represents a vote of confidence in the quality of the school and a guarantee that it remains a top-tier destination for the world’s best in pharmaceutical sciences and research.

Only about a quarter of pharmacy schools around the country have been named. Around the nation, the endowment is believed to be second in size only to the UNC Eshelman School of Pharmacy at the University of North Carolina at Chapel Hill.

“This endowment will allow the USC Alfred E. Mann School of Pharmacy and Pharmaceutical Sciences to extend its commitment to health equity, wellness and best possible patient outcomes,” said Steven D. Shapiro, senior vice president for health affairs at USC. “We look forward to new opportunities for innovative discoveries as we train the next generation of health care leaders, expand interdisciplinary collaborations within the university and improve the health of our local Los Angeles community.”

Department of Biomedical Engineering bridges the gap between engineering and medicine

For USC Viterbi Dean Yannis C. Yortsos, the Department of Biomedical Engineering’s naming gift is a natural offshoot of the department’s early and close affiliation with AMI. Yortsos hopes to use some of the funds to expand the department’s programming and research and deepen its relationship with Keck School of Medicine of USC. 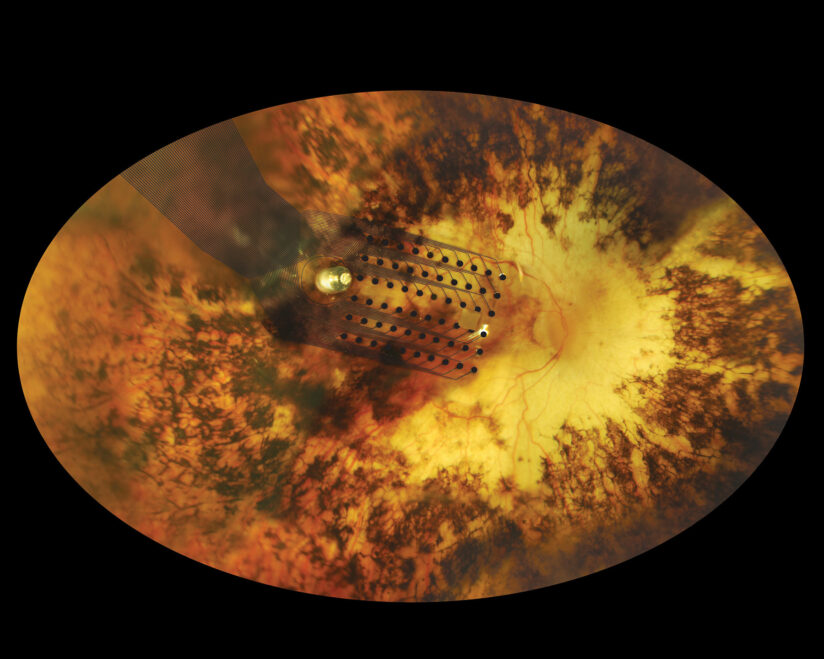 The Argus II retinal implant, which restores some sight to patients who have lost vision due to retinitis pigmentosa, was developed by Mark Humayun, a faculty member of both the USC Viterbi School of Engineering and the Keck School of Medicine of USC. (Photo/Courtesy of USC Viterbi)

“The fundamental idea is that technology enables all aspects of health sciences — whether in neuroscience, molecular biology, diagnostics, synthetic biology, devices or pharmaceuticals — as well as the practice of medicine, to advance the well-being and health of all,” Yortsos said. “The  strong set of health sciences schools at USC and USC Viterbi are natural and strong partners in the advancement of this initiative.”

Yortsos pointed out that many faculty members in USC Viterbi — even outside of biomedical engineering — have joint appointments or projects with applications in biology and medicine, a fact he believes highlights the breadth and scope of the department. He pointed to the work of USC Professor of Ophthalmology and Biomedical Engineering Mark Humayun as an example of how engineering and medicine can go hand-in-hand to achieve Mann’s vision of life-improving medical technologies that can be commercialized. Humayun, director of the USC Dr. Allen and Charlotte Ginsburg Institute for Biomedical Therapeutics, is both an ophthalmologist and biomedical engineer who led a diverse team to develop the world’s first artificial retina, approved by the Food and Drug Administration in 2013. The project was backed by AMI and an example of the strong connection between the institute and the Department of Biomedical Engineering.

Likewise, in 2011, a brain implant developed by the biomedical engineering lab of USC Viterbi Professor Ted Berger became the first medical device in the world to restore lost memory function and strengthen the recall of memories. The MIT Technology Review later named it as one of the Breakthrough Technologies of 2013.

And since 1985, the USC Biomedical Simulations Resource, USC Viterbi’s longest continuously funded National Institutes of Health research center led by Viterbi professors Vasilis Marmarelis and David D’Argenio, has produced software like ADAPT, used in the development of Herceptin, which is the first biologic developed for the treatment of breast cancer, as well as Rituxan for treating non-Hodgkin lymphoma.

The department, established in 1976, is one of the oldest biomedical engineering departments in the country, born from advances in electrical and mechanical engineering and the realization that engineering innovation could be beneficial to the human body. It is the first such program in California to offer bachelor, master and doctoral degrees. An early pioneer in neural engineering, medical devices, diagnostics and, more recently, in molecular bioengineering, the department has achieved many notable successes.

“Technology is revolutionizing medicine and health sciences in an unprecedented way with the goal of living without illness,” Yortsos said. “Biomedical engineering will play a fundamental role in that objective for the benefit of humanity.”

Papadopoulos says his hope for the newly named USC Mann School of Pharmacy and Pharmaceutical Sciences is to train students to address the issues and pandemics of tomorrow, “possibly through jobs that don’t even exist yet.” One current problem affecting the Los Angeles community is pharmacy deserts, an issue Dima M. Qato, community pharmacist, public health advocate and associate professor at the School of Pharmacy, has spent more than a decade addressing.

To help meet that need, the school plans to open a new USC pharmacy on the corner of Manchester Avenue and Broadway in South Los Angeles late next year that will go beyond filling prescriptions. The facility will also offer chronic disease management, vaccinations, health and wellness education for the community, and research on best practices and health policies to reduce health disparities.

For Yortsos, the naming gift likewise opens new doors for the kind of talent and innovation the Department of Biomedical Engineering will need to create the medical and technological solutions of tomorrow. “Naming the department has always been an important goal of the school since it provides additional resources for growth and global impact,” Yortsos said. “It is also a testament to the university’s commitment to advancing the field.”

USC-led study is part of a growing body of research indicating that an expansion of pharmacists’ roles is a potential solution.