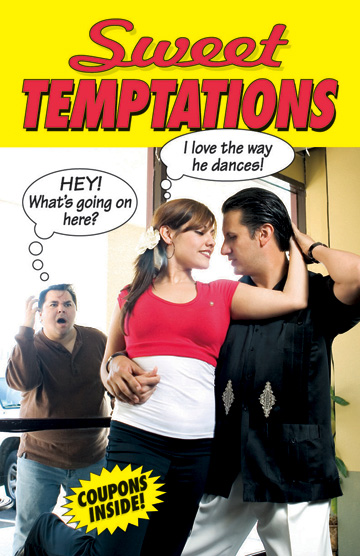 “No, Ramon, you know better than that. Insulin doesn’t cause blindness. Your brother’s diabetes has been out of control for years…because he didn’t take care of himself. I’m worried about you, too,” Julia tells her overweight husband.

Julia and Ramon, portrayed in dramatic black and white photos, are the main characters in Sweet Temptations, a fotonovela produced by the USC School of Pharmacy to educate the Spanish-speaking community about diabetes by dispelling common myths and promoting lifestyle choices that positively affect the disease.

“As pharmacists, one of our roles in the community is to educate our patients about disease prevention, the care of their disease and to improve compliance so that they may achieve a positive health outcome,” said Melvin F. Baron, associate professor at the School of Pharmacy, who served as the project director for the fotonovela. “Diabetes strikes Latino Americans at one-and-a-half times the rate that it strikes the rest of the population. We’re trying to change the course of this disease by getting people to take care of themselves.”

Baron, who previously directed a fotonovela on the importance of folic acid to prevent birth defects, recognizes that the medium can make a big difference in the impact of a message. He worked with focus groups that identified the fotonovela, a photo comic book punctuated with soap opera themes, as a popular format that is familiar to the Latino community.

Once the format was determined, Baron and his team launched into writing a script addressing myths and fears about diabetes.

For example, as the above quote portrays, many Latinos think insulin causes blindness. Other diabetes concerns that came out of the focus groups and are dealt with in the story include sex, heart disease and longevity.

“The focus groups identified all the hot buttons and the myths that we deal with in the story,” Baron says.

The end result is a fact-filled piece, intertwining parents, their young adult children and their loved lives and family lives and the threat that diabetes poses to them. The story is funny and heartwarming while making a strong case to take care of your own health through diet, exercise and prescribed medicines.

Baron relied on the expertise of Gregory Molina, a project director at the USC Institute for Health Promotion and Disease Prevention Research, to produce the fotonovela. Molina was instrumental in tapping the writing talents of Josefina Lopez, who co-wrote the screenplay for the feature film, “Real Women Have Curves,” as well as the theatrical talents from CASA 0101 theater group in Boyle Heights

The School of Pharmacy is extending the reach of the fotonovela through performances featuring bilingual actors, using a hybrid script that mixes English and Spanish. A community event is also planned for early 2007 that will present a reading of the fotonovela followed by a discussion about diabetes with health professionals and free diabetes screenings.

The booklets are being distributed to the community through area clinics and Good Neighbor Pharmacies.

To obtain copies of the fotonovela or to learn about upcoming events, contact Melvin F. Baron at (323) 442-2686 or at mbaron@usc.edu.