The USC Trojan football team had just lost another game last fall. Ray Paladino, USMC, suffered along with his fellow Trojans, but he wasn’t defeated. The Los Angeles Memorial Coliseum erupted at halftime as a deep-voiced announcer told Ray’s story in 47 seconds: 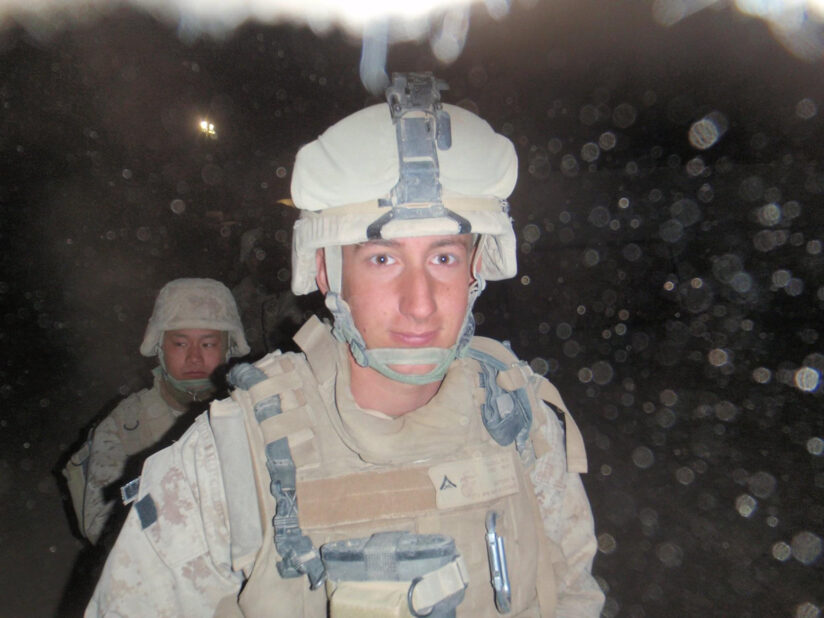 Ray Paladino was deployed to Afghanistan in 2009. (Photo/Courtesy of Ray Paladino)

“Ray spent the last 14 years in the Marines and was deployed to Afghanistan in 2009.

“He serves in the reserves in Seal Beach and is a recent graduate of the Marshall School of Business with a bachelor’s degree in business administration. Ray is now pursuing a master’s degree in finance at USC.

“Please join us in welcoming Raymond Paladino as our student veteran of the game.”

With the crowd roaring around him, Paladino, dressed in a Trojans jersey, flashed the victory sign and mouthed, “Fight On!”

It was a good day. Paladino had a plan, a fiancée and a solid career as a Marine reservist. All that stayed in place until three months later, when his life took a hard turn.

‘Like active duty in a combat zone’ for USC veteran

“I thought it would just be something that they could just cut off and I’d go on with the rest of my life,” Paladino said of the painful mole on his foot that made it difficult to walk. “The dermatologist biopsied it. They called me as soon as they got the results. It was surreal. I kind of tuned out whatever else the doctor was saying, at that point, just kind of thinking, what’s gonna happen next, with my life?”

The biopsy revealed malignant melanoma, stage 3. Stage 3 melanoma, also known as regional melanoma, means it has spread to nearby lymph nodes, lymph vessels or skin. Ahead lay a different kind of enemy from what the Marine previously survived.

“It’s like active duty in a combat zone, it’s very simple,” Paladino said. “You only have to worry about one day at a time, what you’re doing and staying alive to make it to the next day.”

Born in Oxnard, Paladino joined up at the end of high school. Within months, he was protecting infantry units from mortar attacks and missiles in Afghanistan.

I headed over there at 18 not knowing much about the world.

“I headed over there at 18 not knowing much about the world,” Paladino said. “There were grown men working with me and against me. If somebody wanted to attack our convoy, we were always an easy target. It made me grow up fast.”

After Afghanistan, Paladino helped train forces in the countries of Norway and Georgia before returning to the U.S. as a reservist. After a job in the private sector ended, a community college counselor encouraged him to transfer to USC.

Paladino started at USC Marshall in 2019 and took up residence at USC Veterans Housing. He graduated in the spring and started working on a master’s in finance right away. It was a remarkable achievement for a man who graduated high school with middling grades.

The melanoma diagnosis would change his course, but not his destination.

Once a month, Paladino shuttles to the USC Norris Comprehensive Cancer Center. His oncologist is Gino In, assistant professor of clinical medicine at Keck School of Medicine of USC.

The doctor becomes enthusiastic when he discusses cancer treatment — especially immunotherapy, which has transformed medical care over the past 10 years. Chemotherapy, by comparison, is a blunt weapon, in said. 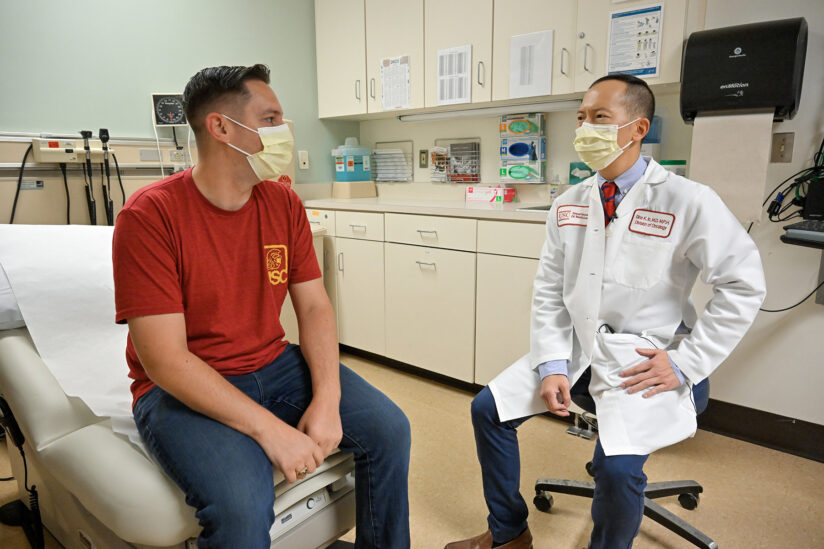 The treatment process starts around 8 a.m. and finishes by early afternoon. Paladino’s fiancée, Christina Burcelis, also a USC grad, is usually with him. Her mother, Patricia, died in 2009 of the same disease, and, like Paladino, the cancer started in her foot.

“I’m the extrovert of the relationship. He’s definitely introverted,” said Burcelis, a sharp, confident advocate for Paladino. “But once you start finding out about his passions and excitement and finding common ground, he doesn’t shut up.”

Burcelis traces Paladino’s cancer back to toxic exposures from burn pits in Afghanistan. The couple is pursuing treatment coverage through a new law recently enacted by the Biden administration, the Promise to Address Comprehensive Toxics Act. The act expands health benefits for veterans exposed to burn pits, Agent Orange and other toxic substances.

A future in family and finance for USC veteran

Burcelis and Paladino incorporate college, work, treatment and follow-up into their schedule. There’s no wedding date, but both want a life that balances work and family. After he completes his master’s in finance in December, Paladino plans to work in portfolio management.

“A lot of people are financially illiterate,” he said. “They don’t understand that there’s a lot of ways that their money could be working for them. I was one of those people until I found a passion for finance. And I wanted to be able to use that knowledge to help others.”

From master sergeant to master’s degree and doctorate, Shawna Hudson finds her place

Overcoming a learning disability, this South L.A. native and Air Force veteran fulfilled her dream of graduating from USC and now teaches corporate America a lesson in racial bias.