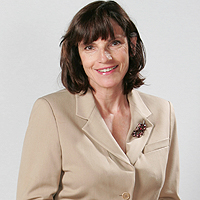 Eichenthal is the KUSC director of arts programming.

KUSC director of arts programming Gail Eichenthal is known to many Angelenos as the voice of the Los Angeles Philharmonic, but she has been carrying her tape recorder and keen questions to arts institutions all over the Southland since she returned to the station a year and a half ago after a 16-year absence. Her “Spotlight on the Arts” features tell listeners about important events, people and developments in visual arts, theatre, film, dance, architecture and, of course, music. With the 60th anniversary of Classical KUSC FM 91.5 being celebrated Tuesday, Oct. 24 from 9 a.m. to 5 p.m., it seemed an appropriate time to check in with this well-connected broadcast journalist.

AE: How did you prepare to work at a classical music station?
GE: At UCLA (there, I said it!), where I majored in music and English, I was fortunate to receive the Abram Chasins Internship in Classical Music Radio at KUSC. I learned the ropes of music programming, writing for broadcast and some announcing. I fell in love with KUSC instantaneously, and they couldn’t get rid of me. The internship at KUSC turned into a job that lasted 14 years.

AE: After you left KUSC in 1989, people knew you as a radio news reporter and film critic on KNX, the local CBS affiliate. What was the reentry like, coming back to classical music?
GE: Well, they don’t check my car for planted bombs when I pull into the parking lot at KUSC! Everything’s different, really. In news, I would be sent to a breaking story at 6:30 a.m. and by 7:11 a.m., they’d want the story on the air, with all the facts straight and some interview clips. I got used to working on my feet, running a lot and talking much faster to squeeze all that news into a 45-second report. Mozart and Beethoven require a more relaxed tempo. Sometimes I still find myself talking too fast.

AE: How early do you arrive before a live broadcast, such as last month’s opening concerts at Segerstrom Hall in Orange County?
GE: I may have worked on the script for two to three days with Alan Chapman, my co-host, and, with the help of KUSC director of production Mark Hatwan, produced an intermission feature a few days before. Well, more accurately, a few hours before. I confess I usually end up delivering the intermission interview to recording engineer Ted Ancona still warm, like the tape in “Broadcast News.” For an 8 o’clock performance, Ted arrives two hours ahead, having adjusted the microphones at several rehearsals earlier in the week. Alan and I arrive one hour before curtain, traffic willing. I do have a tendency to cut these things too close. Perhaps I’m in search of that old news reporter’s adrenalin rush.

AE: What is the “Spotlight on the Arts” series?
GE: We do five to six 90-second features a week that cycle throughout the day at 6, 7 and 8 a.m. and 4, 5 and 6 p.m. We try to make them timely, and the topics can range from the new opera “Grendel,” an Actors’ Gang performance, a playwriting workshop in Palm Springs, an opening at the USC Fisher Gallery or a student ballet company at the Ford Amphitheatre. I voice most of them, with Brian Lauritzen co-producing, and the great ABC Radio anchor Gil Gross stepping in for me from time to time.

AE: The range of subjects you cover truly is astonishing, from Music Man Murray’s rare record store to a mural restoration on Olvera Street. What’s been the reaction?
GE: Classical personalities, small theatres and fledgling chamber groups often don’t get mentioned in the Los Angeles Times or Orange County Register and don’t have much money for promotion. So they tend to be excited about our features. There’s so much to cover in the arts, and our reach extends to Santa Barbara, Palm Springs, San Bernardino and Riverside counties. There’s been an explosion of small theatres in Southern California, and in terms of visual arts, it’s a very eclectic, exciting time here. It’s my hope these features help strengthen KUSC’s ties to the wider arts communities.

AE: What about symphonic coverage?
GE: In the last few years, L.A. has become the symphonic capital of the country. Disney Hall really galvanized the arts scene. It’s a fabulous time to be making negotiations with American Public Media to broadcast a lot of these concerts nationally. We are doing the entire 2006-07 seasons of concerts by the Los Angeles Chamber Orchestra, the Los Angeles Master Chorale and a 13-week series of local broadcasts of the L.A. Philharmonic, plus many special concerts. We’re also finalizing plans for some major opera broadcasts � a first.

AE: You mentioned that the cultural spirit these days is similar to what you felt at the 1984 Olympics. What do you mean by that?
GE: I covered the amazing Olympic Arts Festival for KUSC that year. The caliber of international talent that was here really changed the way L.A. views the world of arts, and vice versa. We had the most adventurous companies and artists and musicians from Europe, Asia, everywhere. It turned all of our heads around. And it’s the same feeling I’m getting now.

AE: What is the station doing to celebrate its 60th birthday?
GE: Let me get one thing straight: Contrary to our image, classical music people are party animals. We’re devoting the entire broadcast day to special programming, digging up some of Jim Svejda’s buried broadcast treasures and bringing in lots of surprise guests. We’ll have a blast. Tune in!