With Election Day nearly upon us, Kambiz “Kamy” Akhavan is leading a final push to encourage USC students, faculty, staff and the local community to make their voice heard. 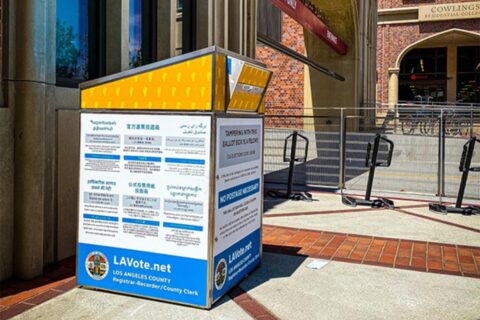 “Your vote is your way to influence the outcome of these public decisions, to honor your civic duty as an American and to join your community in shaping the future you want to see,” said Akhavan, executive director of the Center for the Political Future at the USC Dornsife College of Letters, Arts and Sciences.

Get out the vote: Taking voting to the voters

This year, USC hosted the Los Angeles County Mobile Vote Center Program with the county registrar’s office. The program takes voting to the voters, with eligible voters able to vote early or via provisional ballot at both USC campuses. And in another first, Los Angeles County Vote by Mail boxes were installed at USC Village and on the Health Sciences Campus. The drop boxes made their initial appearance during the June primary; for the midterm elections, they will remain available until 8 p.m. on Nov. 8, Election Day.

Your vote is your way to influence the outcome of these public decisions, to honor your civic duty as an American and to join your community in shaping the future you want to see.

While the midterm elections generally lack the popularity of a presidential election, there’s still much at stake. Nationwide voters will decide who will represent them in the U.S. Senate and House of Representatives, and California ballot issues include abortion rights, legalizing online gambling and funding arts and music programs in public schools. Locally, there’s a heated Los Angeles mayoral race to weigh in on, as well as measures on funding for additional low-income housing and a property tax to raise money for affordable housing.

The Center for the Political Future hosts programs throughout the year to engage voters and hopes to carry over the momentum from the 2020 election, in which 87% of USC students were registered to vote. It was a record turnout for USC, an effort worthy of placing the university fourth among the top 30 ranked schools.

For more information on voting in the upcoming election, including polling locations and provisional ballots, visit USC Votes.

Why is America so divided? Researchers find fake news about controversial topics contributes to political polarization

A new USC study has found that liberals and conservatives feel certain violations of moral concerns like loyalty and purity in different areas of their bodies.

USC works to get out the vote