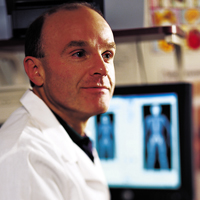 The Keck School of Medicine of USC has received a $150,000 Clinical and Translational Science Planning Grant from the National Institutes of Health.

The grant, intended to support the development of a Clinical and Translational Sciences Institute, is good news for a process that is already under way, said Thomas Buchanan, professor of medicine and obstetrics and gynecology and associate dean for clinical research at the Keck School.

“We have already implemented a two-year planning process to develop an institute in clinical and translational sciences,” he said. “The grant reviews were very positive and our priority score was in the outstanding range, which bodes well for the future.”

The goal, he explained, is to become a member of a new national consortium designed to transform how clinical and translational research is conducted. The consortium is part of a new priority at NIH to change and integrate the approach to medical research, enabling researchers to advance basic research discoveries to clinical care more efficiently and quickly.

The consortium is funded through Clinical and Translational Science Awards from NIH. So far, 12 academic health centers have received the awards. Another 52, including USC, were given the planning grants to help them prepare applications to join the consortium.

Size is the biggest hurdle faced by USC as it seeks to streamline and centralize its clinical research programs, said Buchanan, who directs the General Clinical Research Center, or GCRC, at LAC+USC Medical Center. Approximately 100 faculty members from the Health Sciences campus, Children’s Hospital Los Angeles and the University Park campus, as well as faculty from the City of Hope (who have a satellite GCRC in the USC program), are involved in planning the new institute.

“As you can imagine, trying to organize collaboration and infrastructure and deliver content across four campuses is quite an enormous undertaking,” Buchanan said.

So far funding for the planning has come from the Keck School, the schools of pharmacy and dentistry and the office of Vice Provost Randolph Hall, Buchanan said. The schools of social work and gerontology also are actively involved in the planning process.

USC has hired a consultant, AMC Strategies, to advise and oversee the process. “The NIH planning grant will augment those internal funds and allow us to continue through all phases of the planning,” Buchanan said.

Planning began with faculty interviews in early 2006, followed by an opening retreat in February. Following the retreat, the group developed a steering committee and five working groups to focus on the conceptual design of the institute. The five working groups are meeting individually to come up with the conceptual design for the five main “centers” that will make up the new institute, including:

� Center for Translational Science will promote and support interdisciplinary research to move basic discoveries into the pipeline of development of novel diagnostic and therapeutic approaches;
� Center for Human Studies will support mechanistic research in humans and first-in-human testing of novel therapeutics and diagnostics, expanding the current role of the GCRC;
� Center for Community Translation will support bi-directional research and implementation between the institute’s academic participants and both clinical care and community health partners;
� Center for Information Sciences will provide expertise in information management and analysis through support for informatics and statistics;
� Center for Training and Career Development will provide both general education and specific degree granting programs in clinical and translational science for trainees, faculty and staff of the three participating institutions.

“We already have many of the pieces that will be required to put this institute together,” Buchanan said. “However, some areas, such as informatics, will require significant investment and development to assure our success.”

The end goal, according to Buchanan, is to create a real academic home for clinical and translational science that will promote bench-to-bedside and bedside-to-community translation with an emphasis on improving the health of high-density, urban, multicultural populations.

Buchanan said he expects conceptual planning for the new institute to be completed this year, with the practical details to be filled in during the early part of next year. If all goes according to plan, USC will apply to the consortium by late 2007, he said.