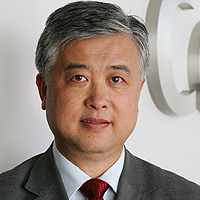 USC engineering alumnus Ming Hsieh, who was born and raised in northern China and went on to found a Southern California high-technology juggernaut, has donated $35 million to the USC Viterbi School of Engineering.

“Ming’s name adds luster to a department that is already highly distinguished. He is a great Trojan who cares deeply about educating future engineers, and we are grateful that he is investing not only in his alma mater but ultimately in this nation,” said USC President Steven B. Sample, who, as an electrical engineer, is also a tenured faculty member in the department.

Hsieh earned his bachelors of science in 1983 and his master’s of science in 1984 in electrical engineering, both from USC. In 1987, he founded AMAX Technology, and in 1990 he co-founded the South Pasadena-based Cogent Inc. He is currently president, CEO and chairman of the board of Cogent.

Cogent is a billion-dollar company that supplies automated fingerprint and other identification systems to governments, law enforcement agencies and corporations around the world.

All 47 law enforcement agencies in Los Angeles County use a Cogent system. The company’s 20.7 million share public offering was one of the most successful IPO’s (initial public offering) of 2004.

“I grew up in a very poor family,” Hsieh said. My childhood was spent studying hard at school during the day and working on the family farm at night.”

In high school, Hsieh was given some old transistors and other electronics and began building primitive radios and television sets. With encouragement from an uncle, P.Y. Hsieh, who earned an M.S. in mechanical engineering from USC in 1952, and an inheritance from his grandfather in Taiwan, Hsieh emigrated from China to the United States to attend USC.

“I will always be grateful for the engineering education I received from USC, and I want to help others do the same thing,” he said.

The department has been recognized for much fundamental research that laid the groundwork for the revolution in digital communications.

Hsieh is the latest in a remarkable list of entrepreneur-philanthropists, all engineering alumni, who have made major naming gifts during the Viterbi School’s ongoing $300 million fund-raising initiative. The list includes:

� Qualcomm co-founder Andrew J. Viterbi and his wife Erna, who named the school in 2004;
� Silicon Valley venture capitalist Mark Stevens and his wife Mary, who created the USC Stevens Institute in 2004;
� Real estate developer Daniel J. Epstein, who named the Epstein Department of Industrial and Systems Engineering in 2002;
� Energy Corporation CEO John Mork and his family, who named the Mork Family Department of Chemical Engineering and Materials Science in 2005; and
� Ken Klein, CEO and president of Wind River Systems, who established the Klein Institute for Undergraduate Engineering Life, also in 2005.

“I am grateful to the Viterbi School’s loyal alumni,” Yortsos said. “Their support is the most important key to raise the school’s endowment and to help our continuing ascent to national and global prominence, in an environment that grows more competitive each day.”