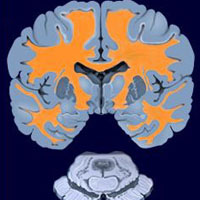 A breakthrough finding on the mechanism of myelin formation could have a major impact on the treatment of diseases such as multiple sclerosis and demyelination as a result of spinal cord injuries.

Myelin, the white matter that coats all nerves, allows long-distance communication in the nervous system.

“It plays a vital role in the overall health and function of the nervous system, and its degeneration plays a role in a number of diseases, such as multiple sclerosis, peripheral neuropathies and even in spinal cord injury,” said Jonah Chan, assistant professor of cell and neurobiology at the Keck School of Medicine of USC.

The study appears in the Nov. 3 issue of the journal Science. Chan, who works at the Zilkha Neurogenetic Institute at the Keck School, collaborated on the study with Michel Cayouette and researchers at the Institut de Recherches Cliniques de Montreal in Canada.

At a basic level, the nervous system functions like a collection of wires that transmit electrical signals encoding our thoughts, feelings, and actions.

Just as an electrical wire needs insulation, myelin is wrapped around axons � the wire-like extensions of neurons that make up nerve fibers. The sheath helps to propagate the electrical signal and maximize the efficiency and velocity of these signals in our brain and body.

Diseases and injuries that compromise the integrity of myelin, such as multiple sclerosis or peripheral neuropathies, have dramatic consequences such as paralysis, uncoordinated movements and neuropathic pain.

Chan’s study sheds light on the mechanisms that control how myelin is formed during development of the nerves. The article constitutes an important step forward in understanding the process of myelination and opens the way to new research in this field.

Chan showed that a protein, Par-3, is at the base of the myelination process. This protein becomes localized to one side of the myelin-forming cells, known as Schwann cells, upon contact with the axon that is to be myelinated.

Par-3 acts almost as a molecular scaffold to set-up an “organizing centre,” which brings together key proteins essential for myelination, in particular a receptor for a molecule secreted by the neurons.

The researchers found that when they disrupted this organizing centre, cells could not form myelin normally. Their discovery demonstrates that Schwann cells need to become polarized so that they know which side is in contact with the axon to initiate wrapping and to bring essential molecules to this critical interface.

These studies open the way to new research, Chan said, which should help to identify other components that are recruited at the organizing center set up by Par-3.

In multiple sclerosis, or after injury, Schwann cells can re-myelinate axons of the central nervous system to some degree. Therefore, these experiments bring about the possibility that manipulating the Par-3 pathway might allow for more efficient re-myelination of damaged or diseased nerves.

This work was supported by the National Multiple Sclerosis Society Career Transition Award and the Donald E. and Delia B. Baxter Foundation Award to Jonah Chan, and the Canadian Institute of Health Research to Michel Cayouette.