Dayanara Saucedo’s journey to a USC diploma began with a simple question: How was school?

“He would ask that question often, daily. It was my earliest memory of him,” Saucedo said. “He was really invested in my education. He wanted me to do more than he was able to do.” 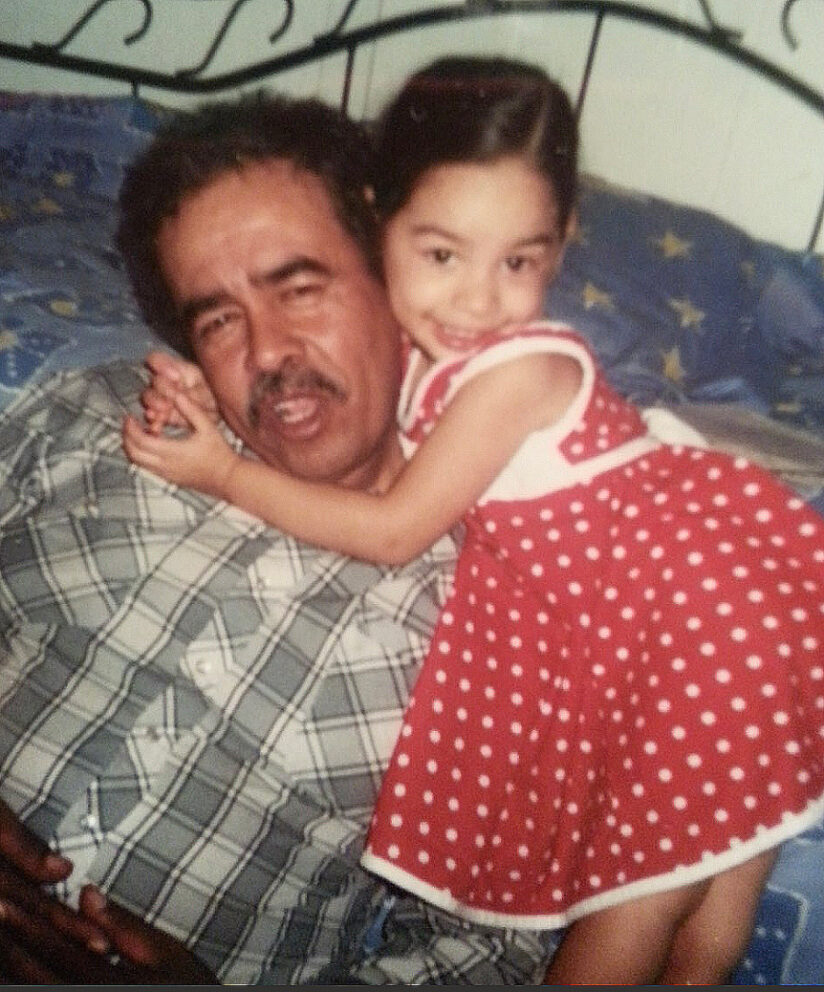 Higher education was important to the family patriarch. He dreamed of his granddaughter becoming the first in the family to attend college — but it was a dream that seemed likely out of reach.

Saucedo’s parents, Mayra and Marcos Saucedo, immigrated from Mexico, settled in Los Angeles and found what work they could selling baked goods and washing dishes. Eventually, the Saucedos earned enough money to rent a two-bedroom apartment in South Los Angeles, where they raised their two daughters, Dayanara and Yelena.

Their apartment was a block from USC — close but worlds away for the family and eldest daughter, Dayanara, who aspired to attend college and become an artist.

“At my school, there weren’t a lot of opportunities to do anything related to arts or fine arts,” she said. “The school just didn’t have the funding for it: The programs were either cut or didn’t exist.”

Then fate stepped in.

While attending the Foshay Learning Center, then-11-year-old Dayanara was scouted by a member from USC’s Leslie and William McMorrow Neighborhood Academic Initiative, or NAI. The program helps bridge the gap between low-income, high achieving students and access to higher education.

“Many of our NAI scholars find motivation in the NAI program to climb over multiple barriers to be able to access higher education,” said Kim Thomas-Barrios, associate senior vice president of USC educational partnerships. “The NAI exists to support scholars in the community on the pathway to college, starting in the fifth grade and culminating in their first undergraduate degree.”

The seven-year preparatory college enrichment program is designed to ready students from South and East Los Angeles for admission to any college or university, including USC.

Saucedo invested more than 100 hours a year for seven years during NAI Saturday Academies, studying writing, math and science and learning about each step of the process to successfully apply to and attend college.

“We don’t call it sacrifice, but we try to insert the fact that what the students and families are doing is investing,” Thomas-Barrios said.

“We are very fond of motivational quotes at the NAI and start our Saturday Academies with them. So, in this case, I’d like to quote President Abraham Lincoln, who said, ‘If I only had an hour to chop down a tree, I would spend the first 45 minutes sharpening my axe.’

“These children and families are sharpening the tools they will need to get to and through college.”

Saucedo’s grandfather was a constant support, offering daily encouragement throughout the arduous process.

“He was there to make sure that I never gave up,” Saucedo said.

In 2017, the hard work paid off when Saucedo finished was accepted into USC. While studying at the USC Roski School of Art and Design, the young artist’s photography received awards and accolades.

However, it was Saucedo’s 2021 spring photo book exhibit, Absence and Loss, that gained considerable attention. The artwork featured photos of the artist’s beloved grandfather — who passed away from COVID-19 days before Christmas 2020. Saucedo spent junior and senior years creating artwork dedicated to Rodriguez’s memory.

“I was doing these photographs for this photography book on the subject of my grandfather,” Saucedo said. “It was about the healing process and what it’s like to be healing in a collective form.

I decided to look through every single photograph … It was really comforting to see them.

“The first things that I had to do in order to get this project started was to look for these images, so my mom pulled out a box in our basement full of old photographs,” Saucedo said. “I decided to look through every single photograph and pick out the ones that I really wanted to work with and the ones that I really wanted to keep seeing every single day, and that’s how I got those images for the project. It was really comforting to see them.”

“This experimental approach is a central strength of Dayanara’s work that sets them apart from other documentary artists,” Kelley said.

For Saucedo’s thesis project, the artist created a photo and video installation about the Los Angeles Metro Rail. The presentation contained a mix of photographs and 8mm film with narration about the Saucedo family and its history living near the transit line.

Despite many artistic accomplishments, Saucedo admits intense feelings of anxiety and grief.

“With the pandemic and the recent death of my grandfather, I felt really overwhelmed,” Saucedo said. “So, every Sunday my family and I would go to the cemetery to just be there in the presence of my grandfather’s grave and it was there that I felt I could hear him saying, “How was school?’”

It was all the motivation that Saucedo needed to keep going.

In May, Dayanara Saucedo walked at the USC 2022 commencement, graduating with a bachelor of fine arts degree. Saucedo’s goal is to become a professional photographer and pursue outreach opportunities to aid Los Angeles public schools that lack art programs.