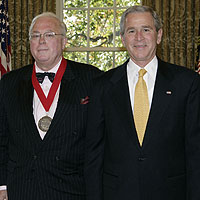 “I’m very grateful for this honor,” said Starr, who accepted the honor from President Bush.

USC University Professor Kevin Starr was honored today by President George W. Bush with the prestigious 2006 National Humanities Medal in a ceremony at the White House.

Considered to be the nation’s leading expert on California history, Starr was credited for his lifetime of work chronicling the state as a scholar, journalist and historian.

“University Professor Kevin Starr is California’s living archive, and he is also one of this nation’s greatest treasures,” USC President Steven B. Sample said. “He has distinguished himself as a gifted writer, professor and historian whose vibrant and penetrating examination of the Golden State � and those who have shaped it � is unparalleled.”

President Bush presented the award to Starr and other distinguished scholars in an Oval Office ceremony. Starr was accompanied by his wife Sheila, their daughter Marian Imperatore and USC Provost C. L. Max Nikias.

Reached by phone in Washington D.C., Starr said he invited Nikias as a guest because the university where he has worked for nearly 18 years provides a supportive environment that helps him to excel.

“I’m very grateful for this honor,” Starr said. “And I also want to thank USC.

“USC gave me the set-up and the self-confidence as a professor,” he said, referring to his success in becoming a national leading force in the humanities. “I share this humanities medal with USC.”

The National Humanities Medal, first awarded in 1989 as the Charles Frankel Prize, honors individuals and organizations whose work has deepened the nation’s understanding of the humanities, broadened citizens’ engagement with the humanities or helped preserve and expand America’s access to important humanities resources.

Starr joined the USC faculty in 1989 as a professor of urban and regional planning. He was designated University Professor in 1998 and currently teaches in the history department of USC College.

Starr is the author of nine books about California, about half of them written while on faculty at the university, he said. His most recent is the one-volume “California: A History” (Random House, 2005).

Currently, he’s working on the last of his seven-volume history of the “Americans and the California Dream” series, published by Oxford University Press. The Atlantic Monthly and others have called the nearly 10,000 pages “a breathtaking scope” of California’s history. Starr also is writing “Lift Up Your Hearts,” about the history of Catholicism in America.

His numerous publications have earned him a Guggenheim Fellowship, membership in the Society of American Historians, the Gold Medal of the Commonwealth Club of California, the Presidential Medallion of the University of Southern California, and the Centennial Medal of the Graduate School of Arts and Sciences of Harvard University.

He has been lauded for his efforts to fund and found the Huntington-USC Institute on California and the West, for his support of Proposition 14, garnering $350 million for libraries throughout California and for his role as author, teacher and all-around public believer in California.

A fourth-generation San Franciscan, Starr graduated from the University of San Francisco in 1962 and went on to earn a master’s degree in history and a Ph.D. in philosophy from Harvard as well as a master of library science from UC Berkeley.

He lives in San Francisco with his wife Sheila. They have two daughters and six grandchildren.