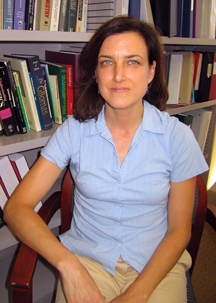 Call it the perfect storm of career paths: young investigator comes to institution renowned for epidemiologic research and gets caught up in one of the biggest issues of the day.

That’s just how it happened for Roberta McKean-Cowdin, assistant professor of research at the Department of Preventive Medicine. What started by chance became the launching pad to expertise.

It was the mid-1990s, and childhood brain tumors were getting enormous press. Between 1973 and 1994, according to data from the National Cancer Institute, the frequency of brain tumor diagnoses in children rose 35 percent. They became the most common pediatric solid tumors, and the second most common malignancy (after leukemia/lymphoma), accounting for one out of every five childhood cancer cases. Adding to the dramatic statistics was the horrible fact that survival rates were dismal.

Back then, as a young researcher at UCLA, McKean-Cowdin was collaborating with Susan Preston-Martin, now an emeritus professor of preventive medicine at the Keck School of Medicine. The two epidemiologists were tracking breast cancer causes, looking at models of steroid hormone metabolism and breast cancer. When McKean-Cowdin graduated from UCLA, she moved to USC.

Then the furor over childhood brain tumors erupted, and McKean-Cowdin jumped into the fray. She developed studies looking at all the traditional epidemiologic causes for the cancers: diet, medications, drugs the mothers took during pregnancy, occupational exposures.

Even when a National Cancer Institute review suggested that the jump in childhood brain tumors was more a result of better diagnostic equipment than any environmental factors, McKean-Cowdin didn’t back down. Working with statewide researchers on one of the first studies to incorporate genetics and lifestyle into the search for causes, McKean-Cowdin continued to track the incidence and look for the cause.

Which is why today McKean-Cowdin is considered one of the foremost researchers into the causes of childhood brain tumors.

But almost a decade later, she says the questions she asks have nowhere near complete answers.

“There are a number of reasons people think we might not have made much progress in finding the cause of these childhood brain tumors,” she said in her office at the USC/Norris Comprehensive Cancer Center. “Maybe there is not a frequent cause, one single cause. Maybe there are many causes.”

On the other hand, she doesn’t believe many of the popular theories for a rise in brain tumors are valid. “Electrical power lines were a hot topic in the late 1990s, when they were blamed for the increased incidence in many types of cancer,” she said. “There are still a number of lingering issues, but much research in the epidemiologic community has found no consistent evidence of an association.”

Similarly, McKean-Cowdin was intrigued by earlier theories that the artificial sweetener, aspartame, might play a role in brain cancers, but “again, there is nothing that showed a definite link.”

Now the hot topic, she said, is cell phones. “Many people feel strongly that cell phones can cause brain tumors, but most epidemiologists say probably not,” she noted. “There has been such a global increase in cell phone use that if there were an association, we probably would have seen evidence of a rise in brain cancers by now.”

McKean-Cowdin is at the forefront of those trying to overcome one of the main obstacles to research on childhood brain tumors: a relatively small sample size. Working with researchers around the world, she participates in the Brain Tumor Epidemiology Consortium, looking at both childhood tumors and adult brain cancers.

One current project focuses on DNA repair pathways for glioblastomas, one of the most fatal and common types of brain tumors. Through the Consortium, “We have DNA from more than 1,000 cases and 2,000 controls. We’ll also probably look into immune function genes to see if they play a role in the development of brain tumors.”

The goal, she said, is “to determine if there is individual susceptibility to glioblastoma. We’re trying to focus on some types of cancer with particular markers, so we can see if incorporating genetics helps explain the cause of these cancers.”

She said she is hopeful of this new avenue of research, because, “we know DNA repair at the treatment end is important, in that it plays a role in terms of sensitivity to some types of chemotherapy and affects patient response. So maybe it can affect susceptibility to environmental exposure or internal exposures like oxidative damage.”