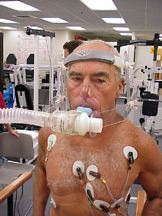 Exercise and high levels of activity can slow the aging of muscles, according to a long-term USC study involving active athletes over 40, including the subject above. Lab tests show the subjects have lower cholesterol, less body fat and reduced risk of strokes, heart attacks and bone fractures, compared to the average person.

Wendy, a lean 55-year-old, has less body fat than the average college student.

These are just a few of the athletes participating in a long-term USC study examining the physiological losses and performance changes in active swimmers, cyclists and runners over the age of 40.

Now in its 17th year, the study continues to demonstrate the benefits of exercise in health maintenance during the aging process.

“We initially expected to see our athletes gradually decline,” said Robert Wiswell, the study’s principal investigator and an associate professor of biokinesiology and physical therapy in the division of independent health professions, “but that hasn’t been the case.”

On the contrary, he said, “the data show that high levels of activity appear to slow down the aging of muscles and help to maintain strength and performance.”

Excellent health is key to observational aging studies like this, said Wiswell.

The study began in 1986 with 146 men and 82 women. Participants were required to be active athletes over the age of 40.

Currently, 120 subjects remain in the study, some of whom fly in from Connecticut, New York and Arizona for lab sessions, which include blood work, nutritional history logs and measures of strength, body fat, bone density and cardiovascular parameters.

“The subjects love the testing,” said Wiswell. “There’s a good deal of competitive spirit among the group, so many are interested in knowing how they compare to others in the bunch.”

While the study has three more years to go, intermittent follow-ups with the subjects have already begun to shed light on certain aspects of aging:

o The average middle-aged person experiences physiological loss at a rate of 1 percent per year, but those involved in ongoing exercise appear to experience slightly less loss.

o While it has been hypothesized that active men lose physiological function more quickly than active women, the study’s data shows that loss is about the same between the groups.

o It does not appear that competitive sports increase injury with age. For those who need this type of motivation, the data shows competition can be positive.

o Master athletes who ran an average of 18 to 30 miles per week had lower bone density than the average population, but less bone fracture risk. (Thirty-eight percent of the subjects had osteopenia, or low bone density.)

While it is “somewhat counterintuitive” to think that running would lower one’s bone density, Wiswell explained that studies in rats have demonstrated similar results: When exercised, the rats did not show higher bone density. But it took more force to break their bones.

These early bone-density results have led Wiswell and his team to rethink the sensitivity of the methods they employ when analyzing impact on bones.

“It could be the architecture of the bones, and not the density, that may be more telling,” Wiswell said.

Although this study focuses more on the effects of ongoing exercise than on nutrition, one can’t help but note the outstanding dietary practices among the subjects.

The study’s male subjects put away approximately 2,600 calories, compared to the average 3,000 for men.

“From a health perspective, one could argue that it’s their diet and not the exercise that causes all these neat things to happen,” said Wiswell. “It’s hard to say. But either way, this is a rare group with excellent habits.”

For those of us whose habits don’t quite meet such standards, there is still hope.

Researchers say people need not be lifetime athletes to reap the health benefits of exercise, nor do they have to be “elite” competitors.

“Most of our subjects didn’t start competing until they were in their 30s or 40s,” Wiswell said, “and very few were athletic growing up.

“It doesn’t appear that starting late limits one’s ability to perform or generate the health benefits that seem to be available from this kind of competition,” he added.

In fact, only 50 percent of the study’s subjects are master competitors.

While science has yet to find the fountain of youth, exercise could be our key to better living in general, said Wiswell.

“We’re reaching older ages these days, and we want to be healthy when we get there,” he said. “The key is maintaining function longer.”

Wiswell hopes to extend his research as far past 20 years as funding will allow, extending the depth of the study by looking at factors such as master athletes’ genes.

“There is no doubt that exercise can increase one’s quality of life,” Wiswell said. “If we can stimulate activity, be it high or low intensity, we might be able to reduce some of the health-care costs and problems associated with aging.

“Strength alone reduces some of the issues of frailty in later life,” he added, “which could mean longer independence for older people.”