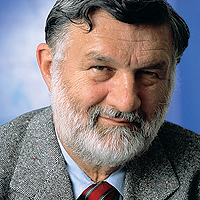 Thomas Mack, professor of preventive medicine, above, and Allen Yang will head the study.

The Keck School of Medicine of USC has received a $2.7 million grant from the National Institute of Environmental Health Sciences that will allow two researchers to track the effect of the environment on the epigenome.

The four-year study will look at pairs of twins from the California Twins Registry to see if environmental factors such as smoking, obesity, pesticide exposure and sun exposure affect the epigenome.

The epigenome is a vast code, invisible to the DNA sequencing effort that constituted the Human Genome Project, which is rapidly being shown to play a direct role in human health. From the Greek epi, meaning “in addition to,” the epigenome consists of chemical “amendments” that dangle like charms on a bracelet from the linear string of letters that spell out the genetic code.

For decades, the sequence of DNA was considered to be the sole determinant of heritable information, but recent discoveries have drastically changed this view. Epigenetics is the study of heritable changes in genome function that occur without a change in DNA sequence. So-called “epigenetic” modifications � changes to the chemical “switches” that turn specific genes on and off � affect hereditary information without the genetic code being modified.

Epigenetic studies have begun to look at genome-wide DNA methylation patterns of human genes in major tissues. Methylation is the only flexible genomic parameter that can change genome function under outside influence and thus may explain the interrelationship between genetics and environment in development of disease.

“We know identical twins often don’t get the same diseases and can be different with respect to methylation status,” said Thomas Mack, professor of preventive medicine. “We also know individual methylation status is associated with diseases like breast cancer and lupus. The question is, are they a marker for environmental exposures?”

Utilizing a methylation analysis developed by Allen Yang, assistant professor of medicine, the researchers will study the epigenome of 2,000 pairs of twins to see if methylation status is produced in the womb or if it comes after exposure to the environment.

“We want to see if there’s an heritable susceptibility,” Mack said, “and whether there are differences by age or sex.”