An exceptional drought season means California enters the summer under mandatory water use restrictions for the first time since 2015. Increasingly light snowfall sends less fresh water to be treated and distributed as fully drinkable water, making new methods of purifying water a vital priority. In fact, nearly 60% of the state is suffering from “extreme drought” conditions, according to the National Integrated Drought Information System. 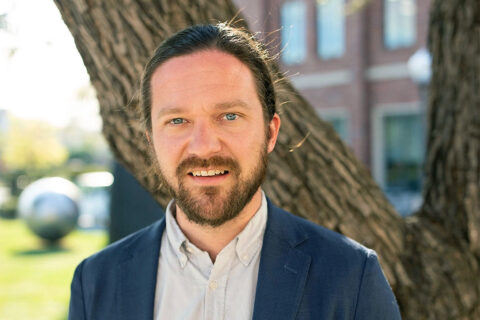 Enter Dan McCurry, assistant professor of Civil and Environmental Engineering at the USC Viterbi School of Engineering. McCurry is an environmental engineer who specializes in wastewater reuse and drinking-water treatment. We spoke with him about the water restrictions, the different types of wastewater and whether he meets the new state requirements for personal water use.

What is environmental engineering?

Environmental engineering is somewhat confusingly named. People tend to think that it involves building habitats for the spotted owl or something like that. Really the main goal is to control and remediate environmental pollution for ecological and human health reasons, and primarily the latter. It used to be called sanitary engineering until the 1960s, when they realized they had a marketing problem because that term sounds gross.

What do you research?

Environmental engineering is primarily split between air and water researchers — I work on the water side. My research is specifically about water reuse and the process that we use to take treated wastewater and turn it into something that is usable as a drinking water source. I study the chemicals in wastewater and how they interact with our treatment processes. These include all kinds of things like industrial solvents and stuff that gets flushed down the drain, like pharmaceuticals. Two-thirds of my research is focused on how well those chemicals are removed during the treatment process and understanding the chemical mechanisms of that. And the other third of my research is on developing new treatment technologies that might be able to get rid of some of those chemicals more efficiently or in a better way.

How does recycling wastewater work?

If you imagine a river going past a city, raw water comes in and is turned into tap water. We take water out of a river or the ground — or in the case of Los Angeles, we actually import it from hundreds of miles away — and treat it to make tap water and send it to people’s homes and businesses. It then becomes sewage and is treated as wastewater — it’s not clean enough to drink but it’s safe to discharge back into the river. With water reuse, we’re trying to close that loop by taking the treated wastewater and running it through a third plant and turn that into a new source for drinking water.

How is recycled wastewater used?

There are three flavors of water reuse — non-potable reuse, indirect potable reuse and direct potable reuse. Non-potable reuse is just recycling water to use on things like grass or golf courses, and also crop irrigation and industrial purposes — places where the water quality doesn’t bother people very much. You see this all over the place in Southern California. Anytime you see a purple pipe on the side of the freeway or in a median, that indicates that it’s using recycled water.

When you put water into the ground, it’s assumed you are getting a bit of treatment for free from nature.

Moving into potable reuse, the overwhelming majority of reused wastewater is being used for indirect use. The treatment plant in Orange County is a good example of this — once it’s recycled, it’s put into what is called an environmental buffer or environmental barrier. What that means 99% of the time is that the treated water is injected back into the ground where it essentially becomes new groundwater. It’s considered lower risk than direct potable use because when you put water into the ground, it’s assumed you are getting a bit of treatment for free from nature. Anything we missed with engineered processes will hopefully get filtered out by the ground.

OK, but what about water we can drink?

Direct potable use means closing the loop fully: Water coming out of the recycling process is run directly to the drinking water plant or refills a reservoir. Imagine something like a plant recycling water and then pumping it up to reservoirs like Castaic Lake or Pyramid Lake in the mountains north of L.A. There’s a lot of excitement about direct potable reuse, but right now it’s not legal in California but should be soon. The bar is much higher for direct use reuse because you sacrifice the filtration given by the environment. The good thing is that it ends up being a bit cheaper because you’re not pumping water out of the ground, which consumes an enormous amount of energy.

How close are we to having this technology available widely?

The short answer is we’re already there. There’s a couple dozen full-scale water reuse plants around the world and we have the biggest one in the world in Fountain Valley in Orange County. When fully operational, it will be able to process 100 to 130 million gallons per day — it is able to process 100% of Orange County’s reclaimable wastewater into water suitable for indirect potable reuse.

What impact will the new water restrictions have?

This isn’t a one-time thing. The water use restrictions are needed, but we’re kidding ourselves if we think that a short-term fix will solve the problem. There was a big call for voluntary water usage cuts followed by a conservation mandate during the last drought in 2015, and it worked, but only for a year and then water use went right back up. It’s the kind of thing you can get people to do for a little bit but then they get sick of it. In the long term, we need to produce more reliable local sources of water.

Are you following the restrictions?

I was looking at my water bill the other day because I’ve been interviewed by the media a few times recently and wanted to make sure I’m not using more than I should. Thankfully, I am already using less than the future restricted amount. In fact, we ripped out most of our backyard when we got our house about a year and a half ago, replacing most of it with native plants and leaving a little 10-by-10 patch of grass for the dog to roll around in. That’s to say your yard doesn’t need to be a barren wasteland — you can have a bit of green landscaping and still easily comply with the restrictions as long as you’re sensible about it.

How to reclaim more water — and save money, too

In Southern California, desalination facilities and wastewater reclamation plants are often near each other. That presents opportunities to provide the most water possible, while minimizing energy usage and keeping the environment in mind, USC Viterbi researchers say.

USC researchers have developed models that can help assess how emerging contaminants disperse, dissolve and ultimately impact water quality and the resilience of aquifers.

Throwing shade at L.A.: USC researcher measures impact of trees, or the lack of them

USC spatial scientist John Wilson discusses the benefits of more trees in the urban core, the differences between Beverly Hills and Boyle Heights, and how trees will shape L.A.’s future.

Becoming an ‘eco-minimalist’: USC experts show how you can help the planet

Is recycled wastewater the answer to California’s water shortage?