When Alyssa Young graduates Friday from USC, she’ll walk away with her Bachelor of Arts from the USC Dornsife College of Letters, Arts and Sciences and the satisfaction that she has given back to the university that has done so much to support her.

Young’s journey with USC began in middle school when she was accepted as a scholar in the USC Leslie and William McMorrow Neighborhood Academic Initiative and continued as a freshman when she was admitted as a fellow in the Norman Topping Student Aid Fund. 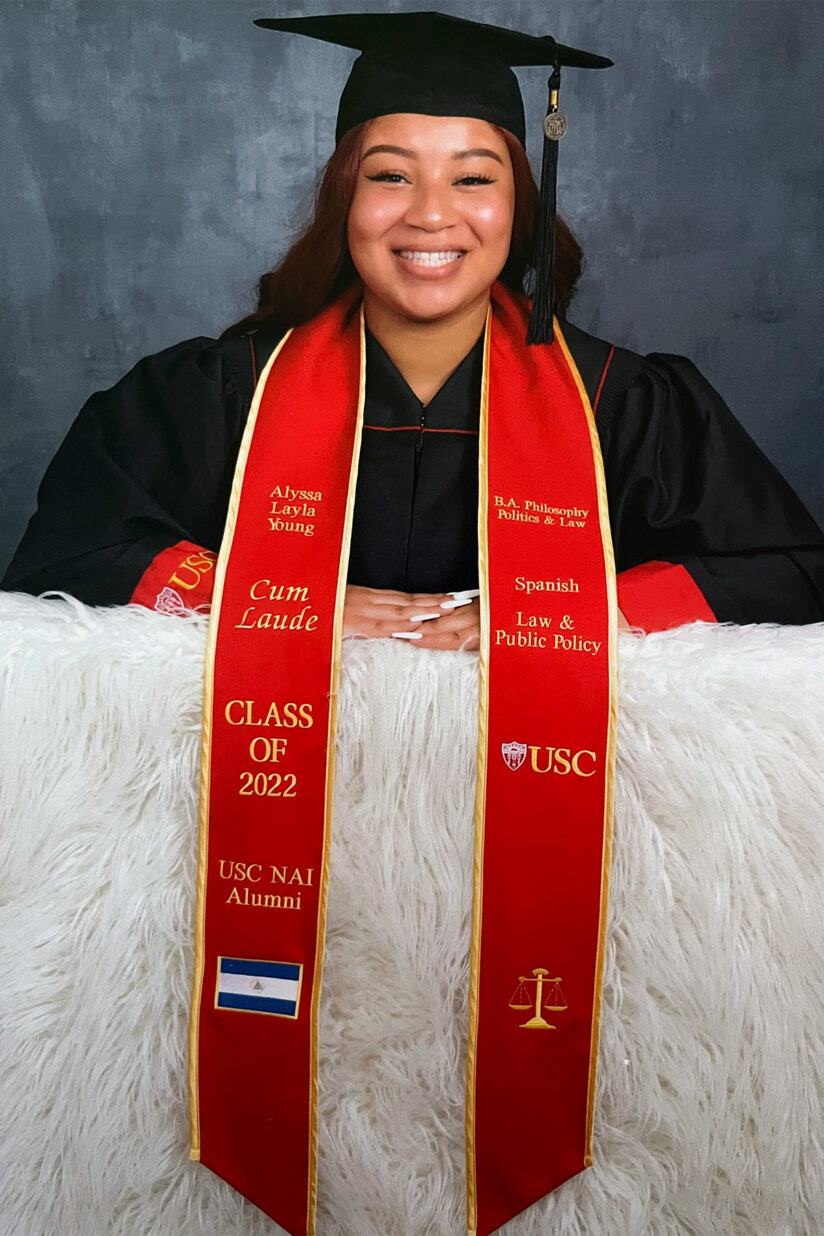 Alyssa Young, an alumna of the USC Leslie and William McMorrow Neighborhood Academic Initiative, attended USC as a fellow in the Norman Topping Student Aid Fund. (Photo/Courtesy of Alyssa Young)

Young, the daughter of immigrants and a first-generation college student, knew from an early age that education was her path to success. Young said her mother, Loja Moses, insisted on it, telling her, “You’re going to college, no doubt about it. I don’t care what you study — do what you are passionate about — but you are going to school.”

Moses learned about the Neighborhood Academic Initiative, or NAI, as Young was preparing to enter sixth grade at the Foshay Learning Center. The USC college preparatory program offers students and their families resources to get ready for college and to flourish once they arrive on campus. The seven-year program doesn’t guarantee admission to USC, but it does offer a full-tuition scholarship to those who gain admission.

The possibility of earning a full-tuition scholarship to USC was enough for Moses and Young to commit and make the sacrifices necessary to succeed in the program. Young graduated from Foshay in 2018 and was accepted into USC.

The summer before her freshman year, she learned about the Norman Topping Aid Fund scholarship. Topping, as its fellows call it, has provided more than $20 million in scholarships to low-income students, particularly those from the communities surrounding USC and first-generation college students. Along with scholarships, Topping also provides fellows with career advice, tutoring and mentorships.

Topping and NAI helped with the financial burden, Young said, but they also gave her a sense of belonging. “I had a community that really helped me,” she said. “If I ever felt lost, there were resources to remind me of my path.”

In turn, that foundation and reinforcement fueled Young’s desire to care for her community and for those “coming behind me.” She volunteered as an academic adviser for NAI and at Foshay, recognizing the importance of representation and hoping that her academic success would inspire other Black, Indigenous and people of color (BIPOC) students. She helped guide high school students through the college application process, advised them on navigating financial aid programs and shared her contact information with those she mentored, making sure they knew they had a resource, advocate and safety net.

I had a community that really helped me. If I ever felt lost, there were resources to remind me of my path.

Young also made a difference within the Topping program. During the pandemic, she spearheaded the creation of Black Excellence at Topping, a social group that provided a space and special programs, including access to therapists and well-being advocates, to help Black students who were feeling disconnected.

“Seeing so many people that look like us, our family members and loved ones, dying and in the face of harm, is traumatic,” Young said. “Without addressing that trauma, its lingering effects are harmful. If I had not found my community, that semester would have been unbearable.”

At last week’s 50th anniversary celebration of the Norman Topping Student Aid Fund, Young received the McDuffie Medallion, awarded to a student who has demonstrated service to the university or the community surrounding USC. 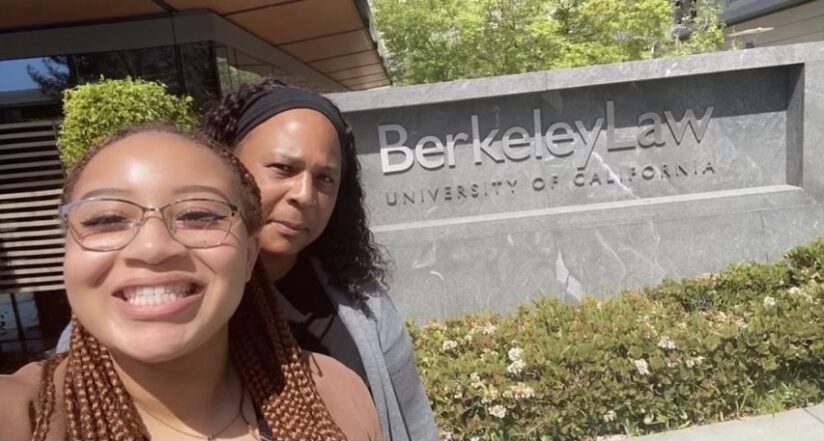 Alyssa Young and her mother, Loja Moses, visit the University of California, Berkeley, law school, which Young will attend in the fall. (Photo/Courtesy of Alyssa Young)

“It is heartwarming to know that we have talented people that care about their families, [who] care about their local community,” said Ron McDuffie, the Topping co-founder for whom the award is named. “They care about excelling in whatever field they choose to major in and have a desire to, once they become employed, still work on a mission that matters beyond themselves.”

The racial strife of recent years — and especially the stories about detention centers and minors separated from their parents at the border — influenced Young’s worldview and shaped her career choice. She will begin law school in the fall at the University of California, Berkeley.

“Being a child of immigrants myself and coming from a family of immigrants, it is near and dear to my heart,” Young said.

Leaving the comfort of the USC community after more than a decade will be bittersweet, but it’s not forever. “I want to come back,” she said, “and make an impact here.”

USC commencement 2022: What you need to know if you’ll be attending

COMMENCEMENT 2022: Thousands will descend on the University Park Campus for the university’s 139th commencement on May 13 — so you’ll want to plan accordingly.

Parents, as they often do, create the foundation of USC student’s success

COMMENCEMENT 2022: Jacqueline Martinez will receive bachelor’s and master’s degrees on Friday, thanks to her mom and dad’s loving support.

Freshmen from South L.A. high school stick together as they begin their collegiate careers.