With only two weeks until graduation, while most USC seniors were studying for finals in and around the University Park Campus, Andrew Binder was making his way along the Pennsylvania Turnpike to Quantico, Va., for some Marine Corps training. 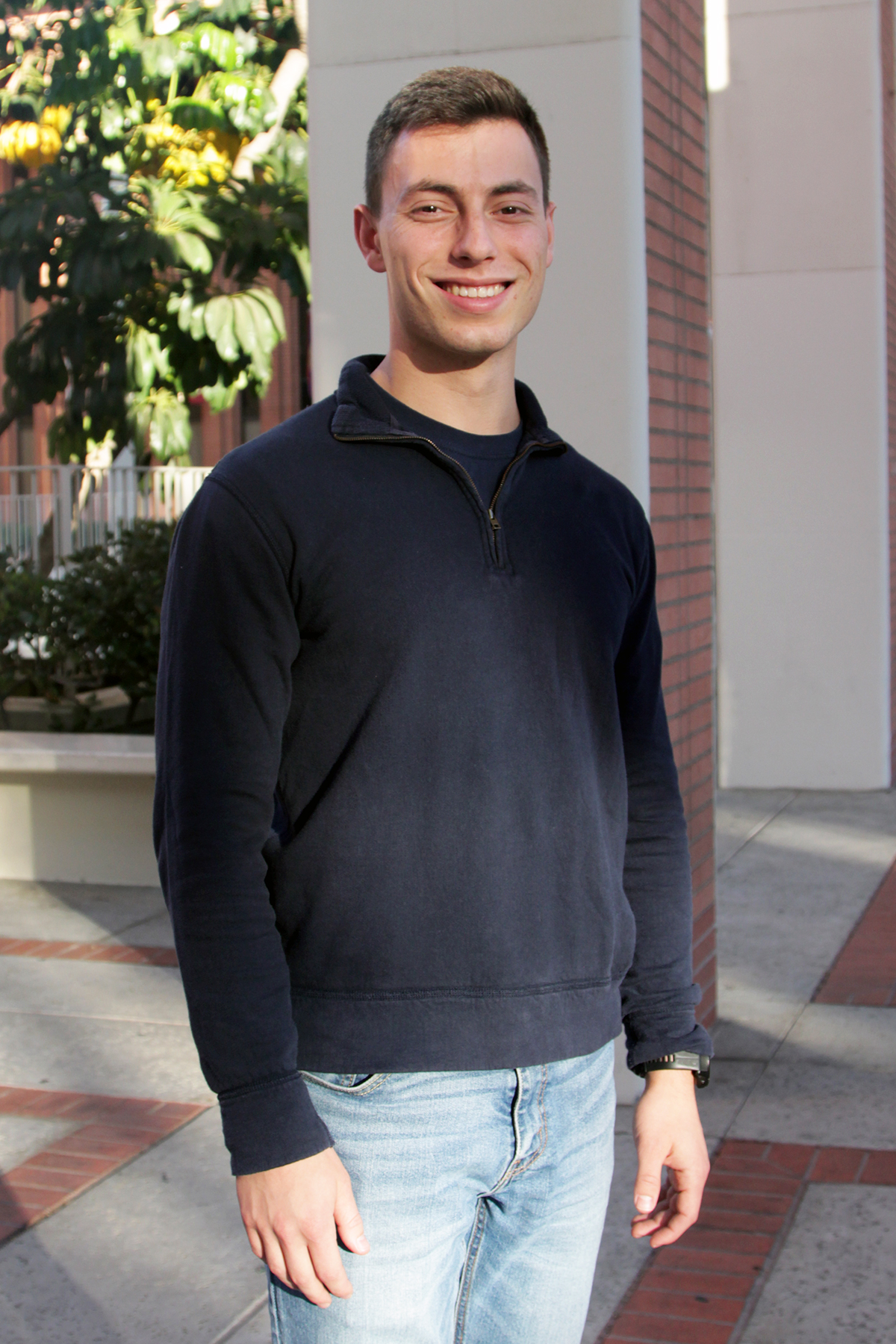 Binder understands this is not the typical experience of a college senior just before graduation, but given his path to USC, “typical” probably wasn’t in the cards. But regardless of the track that brought this East Coaster to sunny Southern California, the result speaks for itself: Binder earned his bachelor’s degree in philosophy, politics and law from the USC Dornsife College of Letters, Arts and Sciences, and was named one of the salutatorians for the Class of 2022.

“I graduated and was commissioned as a second lieutenant in the Marines, and the journey to get there was very challenging,” Binder said by phone from a grocery store parking lot in Pennsylvania. “I’m extraordinarily grateful for the people who helped along the way, because there’s no way I would have gotten to graduation and commissioning and through all of these different experiences without the help of my mentors, my family, my friends, my professors and the people who kept the university running before COVID and during the pandemic.”

Growing up in the small town of Chadds Ford, Pa. — “halfway between Philadelphia and Amish country,” he said — Binder had never really heard or thought about USC until his senior year in high school. A student in the grade above him had been accepted to USC, and out of curiosity, Binder decided to do a little research into the university.

“I thought that the university was extraordinarily well rounded,” he said. “It was a great option to explore my passions — for political science, for philosophy, for community service and for having a good time.”

With commencement just around the corner on Friday, May 13, meet USC’s 2022 salutatorians and valedictorian.

Meet salutatorian Shreya Daniel and the valedictorian of the Class of 2022, Adam Karelin.

Binder applied and was granted an interview, but he missed the sign-up for the Philadelphia round. He had a political conference in Washington, D.C., and noticed that USC was holding interviews there, so the high school senior hopped on a train to the capital — full suit and all — to talk about how USC fit into his hopes and dreams. As someone who had become politically active from an early age — volunteering with the Chadds Ford Democratic Committee in high school — Binder considered studying political science.

“I wouldn’t say I grew up in a family that was very involved in politics, but I would say that politics was involved in my family,” Binder said. “My family is Jewish, and pretty much all of the members of my family fled from anti-Semitic violence.”

One side of Binder’s family fled Russia in the early 20th century, and the other side fled Europe during World War II before relocating to Colombia, where they had to flee another oppressive regime.

“My grandmother inspired me to a certain extent to be involved in politics because she was involved in politics at a very young age in Colombia, speaking out against a dictatorial regime at the time,” he said. “They stood up for what they believed in because it was the right thing to do by her fellow Colombians and for her community, and so I was just very inspired by that story … to give a voice to those people who were most disadvantaged, or to do what I could to make a difference and move the ball forward towards justice.”

Still, he wasn’t entirely sure that he wanted to study politics in college, but he jokes that his first interview with USC sparked that path. During the interview he was asked to give his thoughts on a very divisive topic — the long-standing East Coast vs. West Coast debate: Shake Shack or In-N-Out?

“I said I liked the milkshakes from Shake Shack, but I really liked the burgers from In-N-Out,” Binder said with a laugh. “And the interviewer smiled and said that I’d do well in poli sci at USC.”

Upon his arrival at USC, Binder threw himself into several organizations. He joined ROTC and the Los Angeles County Bar Association’s Veterans Legal Services Project, where he helped homeless veterans who were experiencing legal troubles.

“It was my job to read through 800 pages of California code and find a way to assist them because these were sort of the cases that weren’t important enough to be assigned a public defender,” Binder said.

He later became active with USC Dornsife’s Center for the Political Future, VoteSC, Trojan Democrats (where he eventually became president of the organization) and The Civics Center, a nonprofit that helps high school seniors register to vote as they turn 18. Binder and his team sent out roughly 100,000 voter registration postcards to students across the country ahead of the 2020 elections.

“It was super inspiring to see how wrong the stereotype about my generation is,” Binder said. “Through that work, I met hundreds of students who were extraordinarily passionate about the issues they face and making them better for when they hand them off to the next generation.”

As with the rest of his fellow graduates in the Class of 2022, the COVID-19 pandemic basically upended the middle of his college career. Binder moved in with his parents — who now live in Scottsdale, Ariz. — for the rest of the spring 2020 semester but moved back into his apartment near campus in spring 2021. As he looks back at his experience during the pandemic, he does see some positives.

Our class was extraordinarily lucky to have both an in-person freshman and senior year.

“Our class was extraordinarily lucky to have both an in-person freshman and senior year,” he said. “For me, the pandemic was a reality check about why we do what we do, and the reason I say that is because during the pandemic we saw a lot of suffering, but we also saw a lot of unity and a lot of neighbors helping neighbors.”

Binder will be in the Marines for at least the next four years, but beyond that, he just hopes to bring that attitude of “neighbors helping neighbors” to everything he does.

“My goal with the Marines is to make the most of it and to be as helpful as possible in service to the nation,” Binder said. “Past that, I have an idea of what I want to do, but I’ll be just as happy wherever they need me the most — hopefully law school, but still a lifelong commitment to community service.”

COMMENCEMENT 2022: His USC resume includes an interrupted overseas semester and a unique performance with the pandemic as its backdrop.

Salutatorian Shreya Daniel looks to do it all after graduation

COMMENCEMENT 2022: Medical school is next for the USC Dornsife soon-to-be graduate, along with a side hustle that has so far raised nearly $15,000 for charity.

USC commencement 2022: What you need to know if you’ll be attending

COMMENCEMENT 2022: Thousands will descend on the University Park Campus for the university’s 139th commencement on May 13 — so you’ll want to plan accordingly.