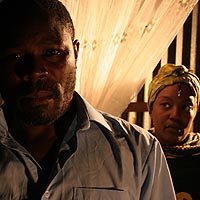 “This story tugs on your heartstrings and it was important to tell,” USC cinema student R.L. Hooker says of his film, “The Knife Grinder’s Tale.”

Malaria scares, military guards with AK47s and an imposing African kingpin are not your typical obstacles while filming a movie on unfamiliar terrain.

For two production graduate students at the USC School of Cinematic Arts, however, it’s all part of the process as they bring a Kenyan short story to the screen.

Following a trip to Kenya for a friend’s wedding, director R.L. Hooker’s passion for the African nation became the focus of his thesis film.

Not “wanting to be that guy who wrote about Kenya without knowing anything about it,” as Hooker put it, he began a search for material that led him to “The Knife Grinder’s Tale” by Yvonne Adhiambo Owuor.

Ironically, Owuor was giving a speech on women’s rights in Africa at Williams College in Massachusetts. Unable to meet with her in person, the writer/director faxed a pitch letter to her hotel, and within hours, Owuor was on board.

“This story tugs on your heartstrings, and it was important to tell,” Hooker said as he detailed his attraction to Owuor’s work.

“Knife Grinder’s” follows a father’s discovery that his son was murdered for their only means of communication � a cell phone.

“I felt it was important to tell this story where it actually takes place,” added Hooker, who lived in Kenya for three months.

“The moment your feet hit the ground, you need to find someone who can help you,” he said, referring to his freelance Kenyan producer Chiara Paglieri. “Without her, we wouldn’t have a picture. Period.”

Hooker’s friend Gregg Helvey � familiar with the landscape from his previous work on a documentary filmed in the African country � was armed with an extensive list of Kenyan crew members.

“I never had a doubt that this experience would result in anything but success,” Helvey said.

Another key player Hooker met through his connections was Sheila Peevers, head of the production company Sounds and Pictures, whom the director proudly calls the team’s “fairy godmother.” Peevers was instrumental in her company’s generous donation of Super 16 cameras � a package worth close to $10,000 � used to film “Knife Grinder’s.”

“We lived and breathed this film,” Hooker said. “Plus, by leaving the U.S., we found it strangely easier to make since there were fewer distractions.”

Fewer perhaps, but the shoot had its own unique and unexpected developments.

Helvey recalled the time in Kibera, the largest slum in Eastern Africa, when he thanked a kingpin for his help.

“It can be a virtual bee’s nest,” Helvey said, describing the African elder as “the kindest man we met on the entire shoot but a tough guy who commanded the respect of anyone who crossed his path.”

Despite unforeseen circumstances that included threats of arrest, armed bandits lurking around their equipment and a malaria scare for the director of photography, Hooker and his crew continually pushed forward on the film.

Through it all, Helvey purposely refrained from posting the intense experiences on his blog during the shoot because “I didn’t want anyone back home panicking.”

“There was never a point where we thought, ‘what are we getting into?’ ” Hooker said.

With a rough cut of “The Knife Grinder’s Tale” submitted to the Sundance Film Festival, Hooker is eager to put the finishing touches on his project.

“The biggest thing for me was the passion I felt for this movie,” he said. “It’s why we’re all involved. Nothing was sacrificed, and we got it done.”

Filmmaking Can Be a Perilous Project