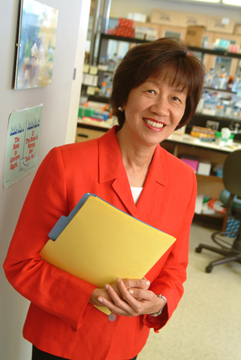 Amy Lee’s research has been continuously funded by the National Cancer Institute for 26 years.

Amy Lee, the Judy and Larry Freeman Cosmetics Chair in Basic Science in Cancer Research at the USC Norris Cancer Center, has been elected to the prestigious rank of Fellow of the American Association for the Advancement of Science (AAAS).

The AAAS elects members each year whose “efforts on behalf of the advancement of science or its applications are scientifically or socially distinguished.” The tradition of this esteemed award dates back to 1874.

A professor of biochemistry and molecular biology in the Keck School of Medicine, Lee is being honored for her leadership in work on endoplasmic reticulum stress and the unfolded protein response. Her research in this field has been continuously funded by the National Cancer Institute for 26 years and has generated groundbreaking advancements in cancer treatment.

Lee will be formally recognized as a fellow during the AAAS Fellows Forum on Feb. 17, 2007, as part of the organization’s annual meeting to be held in San Francisco.

William H. Steier, W. M. Hogue Professor of Electrical Engineering at the USC Viterbi School of Engineering, will also be honored as a fellow for his research of microwaves and photonics.