The last time USC took the field at the Los Angeles Memorial Coliseum was a 35-31 loss to BYU that saw the stands half empty by the final whistle. Compared with that, Saturday’s scene was a complete 180 – sunny, 70 degrees, a new coach, a new quarterback and new sense of excitement. 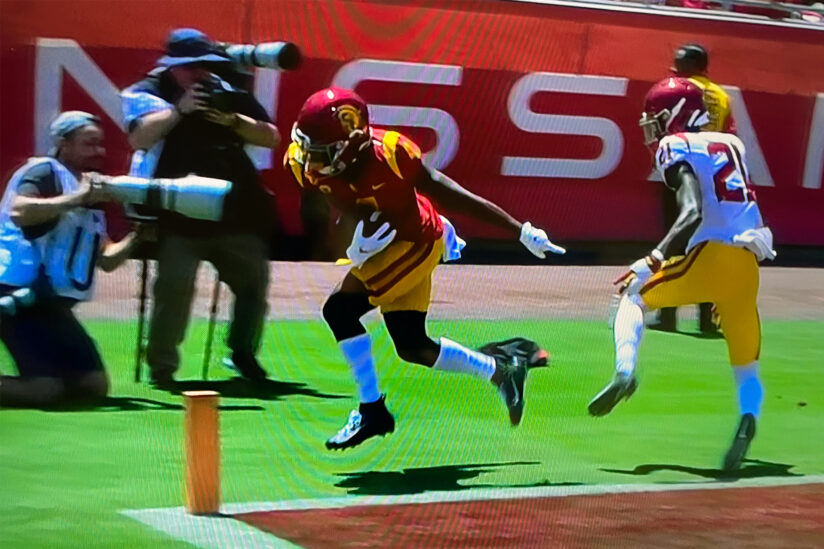 Lines wrapped around food trucks and merchandise tables, crowds gathered to have their pictures taken with Traveler, and a sea of cardinal and gold flooded through the Coliseum gates as fans eagerly awaited a first look at the Lincoln Riley era at USC. 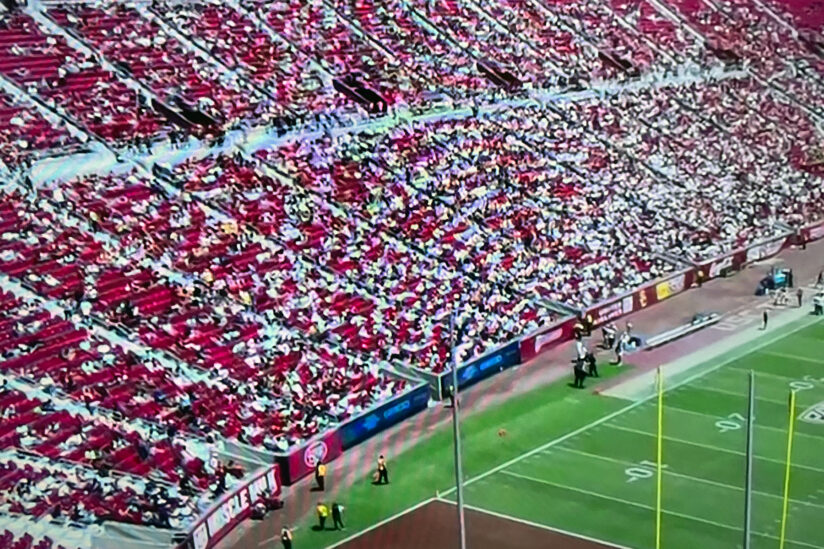 The Coliseum hosts a crowd of 33,427 — the largest ever to attend a USC spring game. (Photo/ESPN)

While the stands might not have been completely full for Saturday’s spring game — a scrimmage between the offense and the defense — they rivaled anything the Coliseum saw towards the end of last season. The scrimmage was even televised on ESPN, the only spring game to be televised on the sport’s flagship channel (reigning national champion Georgia’s spring game was bumped to ESPN 2).

“I think it’s a significant and symbolic move on ESPN’s part,” said Jeff Fellenzer, associate professor of professional practice at the USC Annenberg School for Communication and Journalism. 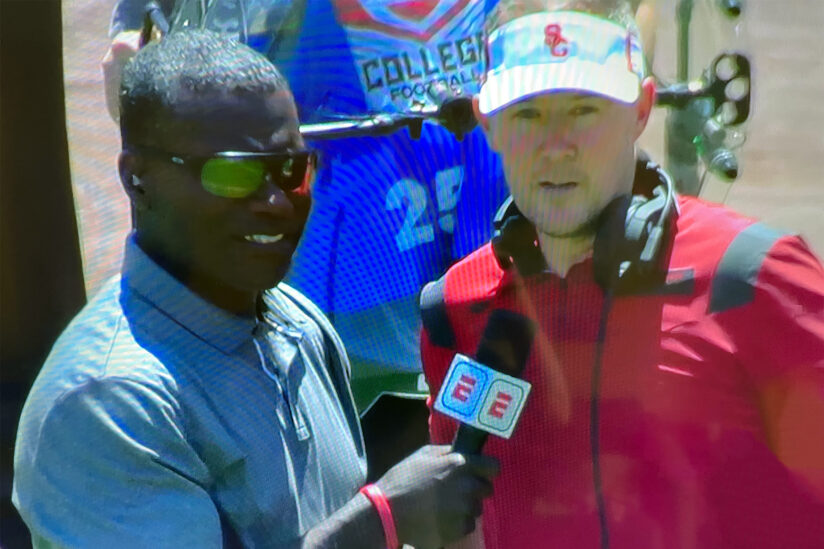 “It really sends a message that this program merits attention.”

When Riley left the University of Oklahoma to become the 30th head football coach of USC, a feeling of hope spread through Trojan Nation, while shaking up the rest of the college football world. USC had seemingly plucked one of the best offensive minds in the country from a blue-blood program — one that Riley had led to four conference titles, three College Football Playoff berths and a 55-10 record overall.

From there, Riley was also able to bring in some high-profile transfers, including All Pac-12 running back Travis Dye from the University of Oregon and Heisman favorite Caleb Williams from Oklahoma.

“It was awesome to get out here in front of a couple fans and have ESPN,” Williams said of his first time playing in the Coliseum. 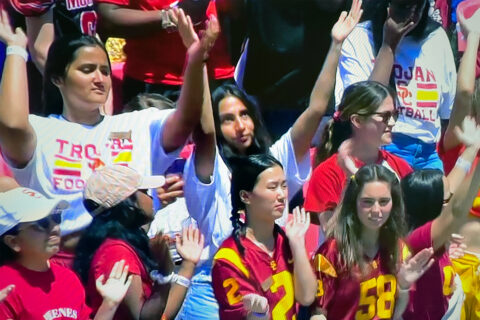 With the offense in the home cardinal jersey and the defense in white, the spring game gave Trojan fans a taste of what Riley’s offense is capable of. Though it was a shortened game at two 15-minute quarters and the defense started with a 21-0 lead, the first- and second-string offenses were able to rally and win by a final score of 34-30. Judging by the sheer number of fans in the stands — officially 33,427, making it the largest crowd to attend a spring game (the last pre-pandemic spring game drew about 2,000 people) — the score of the game seemed to take a backseat to the overall vibe of the Coliseum.

It’s a level of hype and excitement not seen since the early 2000s under head coach Pete Carroll, according to Fellenzer. 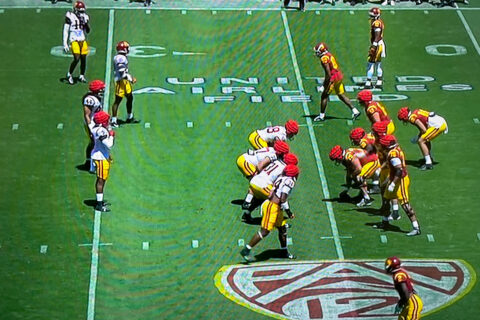 Trojans versus Trojans: Both sides get set at the line of scrimmage. (Photo/ESPN)

“At that time, it was hard to find a good seat in the Coliseum,” Fellenzer said.

As a Heisman Trophy voter with more than three decades of experience in sports management and news media, Fellenzer said this new era under Riley feels like a completely different animal, with the prominence of the transfer portal and name, image and likeness (NIL) deals.

“This hire of Lincoln Riley happened at the same time that we’re going through a period where it really is the college version of free agency,” Fellenzer said. “You have a big-money deal for a big-name and very well-regarded coach, and then that’s triggering the movement among players to want to come and play for the coach.”

But more than just the contracts and big names, the one constant that every player mentioned in the postgame press conference is the “culture” under Riley. It’s something that is hard to describe, even for players, but could still be felt by everyone in the Coliseum on Saturday afternoon.

“If you’re in this city and you don’t feel the momentum of this program,” Riley said, “you’re not paying attention.”

Riley is one of college football’s most successful young coaches. He has won 85% of his games in five seasons at Oklahoma and led the Sooners to four Big 12 titles and four New Year’s Six bowls with three College Football Playoff appearances.