USC’s annual military, veteran and ROTC gala on the evening of March 5, 2020, sparkled as it always had, with dress uniforms and traditions both somber and celebratory. Just eight days later, pandemic safety measures forced university life online — making that gala the last major university event held in person before campus was closed in response to the COVID-19 pandemic.

Nothing says, ‘We’re back!’ louder than our ROTC students training together or marching together right outside my office.

On Tuesday night, the ballroom at The Westin Bonaventure Hotel in downtown Los Angeles was once again full of the blues of the Air Force, the greens of the Army, the bright whites of the Navy midshipmen and the “oohrahs” of the Marines as the tradition returned. The Trojan commitment to service could be seen across generations — ROTC students, Vietnam veterans and even the wives of several Tuskegee Airmen.

“It is absolutely wonderful to be back together with all of you in person today,” USC President Carol L. Folt said. “And nothing says, ‘We’re back!’ louder than our ROTC students training together or marching together right outside my office.” 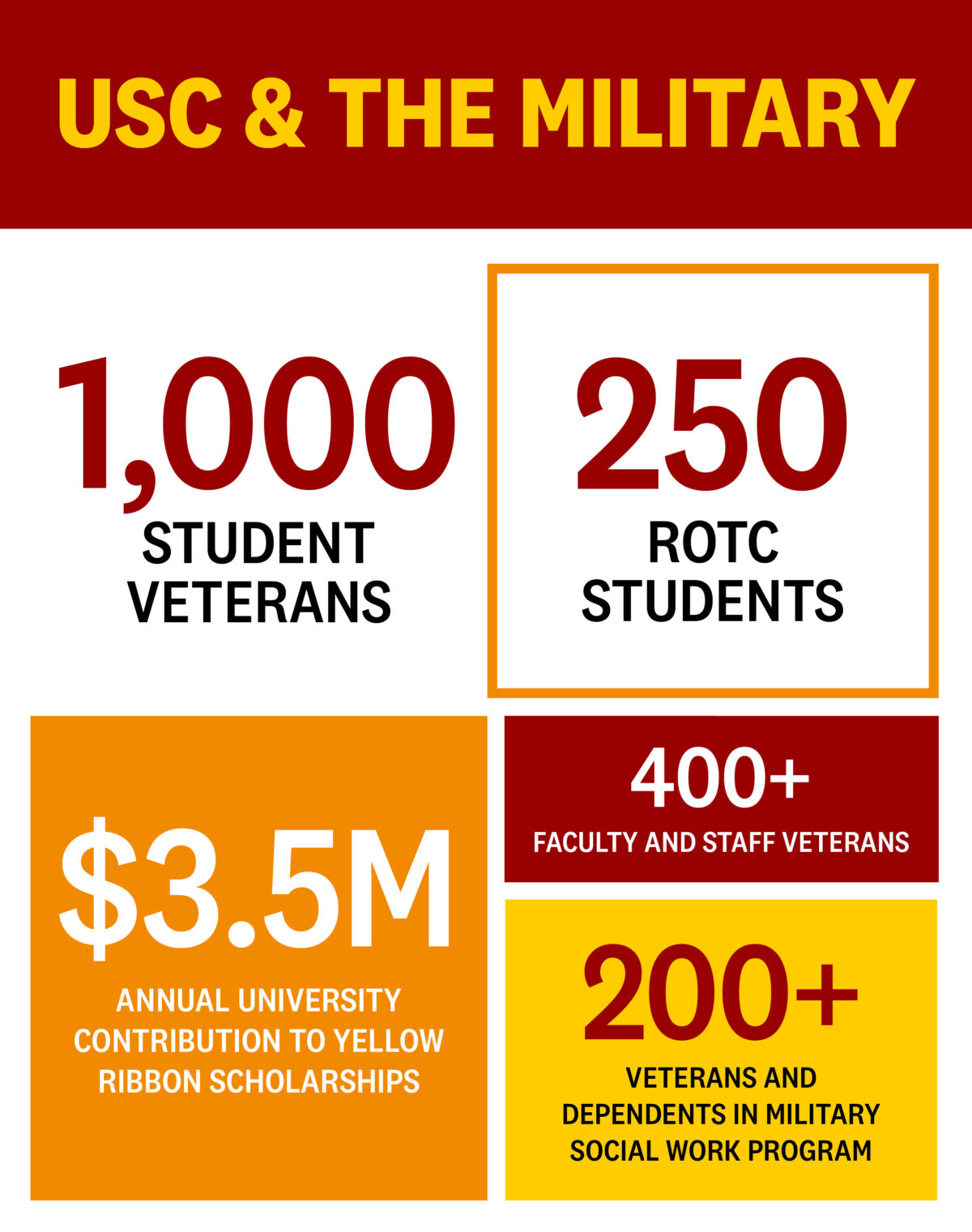 The university enrolls more than 1,000 student veterans and 250 ROTC students. USC contributes $3.5 million to Yellow Ribbon scholarships, which augment the Post-9/11 GI Bill that supports service members’ college attendance and can help pay for graduate school. In addition, more than 400 military veterans are part of USC’s faculty and staff.

The president spoke extensively of the late alumnus and military veteran Joseph Medicine Crow, the first member of the Crow Nation to receive a graduate degree at USC. He joined the Army when World War II broke out and earned the Bronze Star. In 2009, Medicine Crow received the Presidential Medal of Freedom from President Barack Obama. 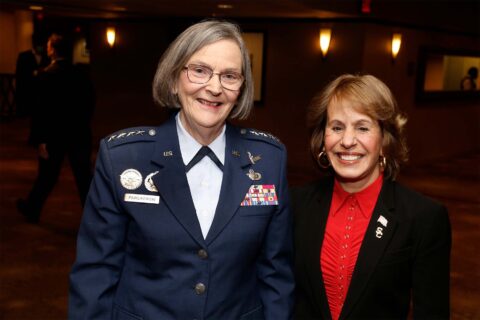 Next month, a landmark building at the heart of campus will be dedicated in his name.

The president also recounted the story of World War II veteran Henry Kondo, who was killed in action. Kondo was among USC’s Nisei students, who were forced into detention centers in 1942. He’ll receive a posthumous honorary degree, along with other Nisei students, on April 1.

“Today, as we’re honoring so many valiant and courageous Trojans who have chosen lives of sacrifice of service, I want to remember Henry Kondo, too, and the 33,000 Nisei who fought for the United States in World War II,” the president said.

General was often ‘the only woman in the room’

Retired Air Force Gen. Ellen M. Pawlikowski, the evening’s honored speaker, spoke of expanding diversity in the military from the ground up. During her active military career, she was, as she has said, often the only woman in the room.

The daughter of a post-World War II veteran, Pawlikowski joined the Air Force ROTC “out of curiosity” in 1974, four years after it opened to women. 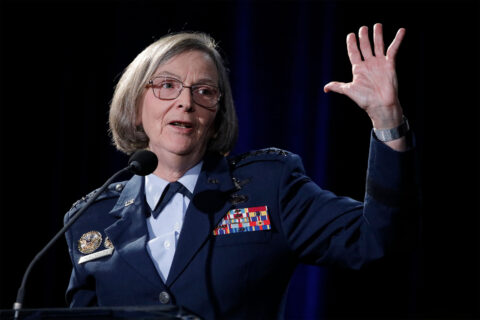 Ellen Pawlikowski spoke of expanding diversity in the military from the ground up. (USC Photo/ Steve Cohn)

“What I learned from my dad was the importance of two things from his military service: One was being part of that brotherhood. … The second was the value of the education that came from him being a veteran,” Pawlikowski said.

Pawlikowski wore the first maternity uniform developed by the Air Force during a time when the force had no designated maternity leave and child care on military bases was sparse.

“As a woman, we were there because, first of all, Congress said you had to take us,” Pawlikowski said. “We were expected to adjust to living with the rules that were established.”

Pawlikowski’s combat duty included Operation Desert Storm, Iraq and Afghanistan. She served 40 years and became only the third woman to achieve the rank of four-star general.

Appointed in 2019 as a Judge Widney Professor at the USC Viterbi School of Engineering, Pawlikowski continues a strong working relationship with the university’s ROTC programs.

“USC has been with our veterans every step of the way, starting with World War I and training Navy officers,” Pawlikowski said. “The veterans that are in this room — and the ROTC cadets who don’t know it yet — are all part of history.”

The university’s diversity, commitment to the military and wealth of research made it an ideal fit for this agreement, which begins a formal partnership.

USC celebrates its military, veterans and ROTC — in person, at last